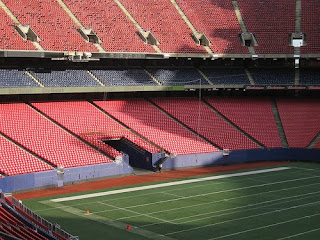 I’m in an unusual position at work this year -- I have more vacation time than ever, and no plans for a vacation!

I’ve always wanted to check out Cape May, a town known for its ornate Victorian architecture and birding at the mouth of the Delaware River in southern New Jersey. But Dave has the dogs, and we have a very tight window of time to make a trip before school starts and he begins teaching. By the time I got on the phone yesterday to find some accommodations, none could be had -- at least, none that would allow two dogs. So we’re postponing Cape May.

Then I called my mom last night, and she expressed doubts about going to San Francisco. She thinks it's too far and she doesn’t have much time -- she and I both need to work around several obstacles in September and October. So it looks like San Fran is kaput too.

Now my plan is to spend my week off in August here in New York, and in New Jersey with Dave. We’ll make some day trips and keep things simple.

Then, later this year, I’ll go down to Florida again and maybe my mom and I can make some local road trips there. I also might go to D.C. and visit friends. And I’m going to a convention in Montreal in September, so at least I'll get to visit someplace new.

Plans are what we make, while life is what happens -- right?