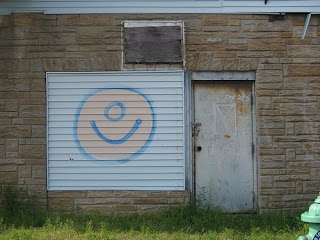 Have you seen "District 9" yet? It's a terrific movie -- definitely not for the faint-hearted, because it contains some bloody violence, but well-made and relevant. Dave and I went yesterday without knowing a thing about the plot, and we were stunned. We couldn't stop talking about it.

Briefly -- and I won't give too much away -- it's about aliens who come to earth near Johannesburg, and then can't leave. They're housed in their own district in the city, and become subject to discrimination and disenfranchisement -- drawing interesting parallels with South Africa's real political history. The film explores the interaction between the aliens and humans, and the ways they treat each other and come to identify with each other -- or not.

I had a good weekend. I spent Friday and Saturday here in the city, going to the gym, cleaning the apartment and hanging out with the cat. Then I took the train to New Jersey and Dave and I cooked dinner on Saturday. I made this fig recipe from my blog pal Barbara, and enjoyed it -- we served it as a side dish, but Dave wondered what it would be like with a protein (meat? chicken? tofu?), which is an interesting idea.

Our friend Adam came over and we spent the evening with him, watching "Project Runway," which I'd never seen before. It was pretty fun, I have to admit. Watching TV with Dave is giving me a cultural education -- I know more about the Food Network now than I ever thought I would!

I finally finished "Guns, Germs and Steel." I wouldn't say I loved it. I thought it was long and repetitive, though some of the ideas are interesting. For example, the author asserts that dominant civilizations arose in Europe not because Europeans were smarter or more innovative, but because they had better resources at their disposal -- nutritious varieties of native food crops, easily domesticated animals. That, in turn, was due partly to the positioning of the Eurasian continent, on an east-west axis where crops were more easily shared among societies than on north-south continents with many different climatic zones. It definitely provided some food for thought, but I'm glad to be done with it!