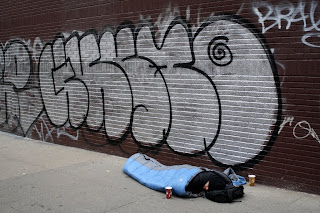 I was thinking on the bus this morning, as I rode back from New Jersey, about the bizarre tradition of Christmas caroling.

Doesn't it seem kind of strange that people once gathered in groups and walked around their neighborhoods singing Christmas songs on one another's front lawns? It's sweet and unbelievable, like Laura Ingalls being happy with a penny in her Christmas stocking, or someone baking a welcoming pie for a new next-door neighbor.

I guess it used to happen somewhere, and thus passed into popular folklore. But I don't think I ever caroled when I was a kid, except at church. I don't remember walking around my own neighborhood and singing. I dread to think how it would have been received -- I suspect some neighbors would have shot at me.

Does caroling still happen anywhere? Are any of my blog readers on the receiving or giving end of neighborhood door-to-door Christmas carols?

My guess is, the predominance of caroling has been grossly exaggerated. It probably was never very popular in most cities and towns, except tiny burgs where everyone knew each other. Otherwise, how would carolers know which houses to skip -- the Jews, the Muslims, the Jehovah's Witnesses and any others who didn't celebrate Christmas? (Or would they have simply sung there anyway, in an admirably secular good-will-towards-man spirit -- in which case one would hope the receiving family didn't mind?)

I read an article a few months ago about the world population, written by a woman in her 70s (as I recall). I've been unable to remember where I read it or who wrote it, but I remember her saying that the world, with all its teeming people, feels different today than it did even when she was a girl. She believes herself lucky to have felt a sense of spaciousness that came with a less-populated planet.

Door-to-door caroling, when it occurred at all, must have taken place in that more spacious time, among small groups of very settled people who lived around each other for years and years. Are there any neighborhoods like that left now?

And if not, do we mind that caroling has waned? (At the risk of sounding Scroogey, I'm not too concerned.)