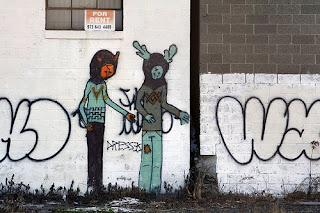 I just finished reading "The Alchemist," a novel by Brazilian writer Paulo Coelho that's become a sort of spiritual Bible for some people. It's about a poor Spanish shepherd who crosses the deserts of northern Africa in search of treasure. Along the way he meets numerous characters who teach him to listen to his heart and to the universe, and show him how to achieve his destiny.

If that sounds corny, well, it is. The book weaves together elements of many religions and traditions and ultimately it winds up being basically new-agey and trite. Maybe I'm just too cynical, but I didn't get a whole lot out of it. There are some kernels of truth but they're buried under a lot of fuzzy feel-good claptrap -- like the very idea of "listening to your heart." I don't know about your heart, but mine just makes a thumping sound. 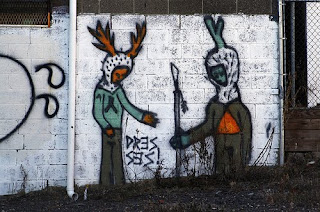 Fortunately, it was also a very fast read. It took me a couple of hours to read the whole book. Nothing ventured, nothing gained.

(Photos: Graffiti in Newark, last week. Strange antlered aliens? I have no idea.)
Posted by Steve Reed at 2:42 PM