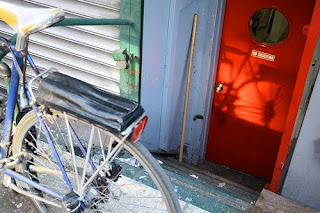 I just finished reading "Born Round: The Secret History of a Full-Time Eater," by Frank Bruni, an acquaintance of mine from work. If you've ever wrestled with food issues, or been curious about people who develop fraught relationships with food and weight, you should definitely read this book. It's a memoir with the author's struggle to control his own weight as its central theme, but it's also a touching reminiscence about his family, the various stages of his career and his love life. ("Watch out for the PG-13 parts," Frank jokingly wrote when he signed the book for me.)

I've never been overweight, at least not significantly, but I did go through a period in the very early 1990s when I was obsessed with food and exercise, on a level that put me at the threshold of an eating disorder. When I look at pictures from that period I'm alarmed at how skinny I was. Newly vegetarian, I took great pains to avoid any fat in my diet and bicycled about 60 miles a week. I was struggling with several issues back then, including professional boredom and an unrequited but fierce love for a close friend -- and all that angst wound up being subverted and expressed in my diet and exercise. Controlling my diet became a way that I could control my otherwise unsatisfying life.

So I can appreciate the complex relationship some people have to food. Frank's relationship was different, in that he struggled with being too heavy rather than too light -- and yet, I think he would see similarities in the underlying need to get emotional and personal satisfaction through eating (or not eating, in my case).

What cured me of my food drama was transforming my life. I quit my job, joined the Peace Corps and moved to the other side of the planet, far away from my angst-producing friend. I didn't join for those reasons, but the move undoubtedly did me good. (Unfortunately, the angst-producing relationship continued for another eight or nine years, but that's another story.)

In Frank's case, he buckled down, began exercising diligently, and even became a restaurant critic -- a job that you'd think would be a minefield for someone with a tendency to overeat. But Frank used the job to impose order on his otherwise chaotic food intake, and he managed to keep his weight under control despite eating out daily -- sometimes more than once. Pretty amazing!

At any rate, I enjoyed the book. If you're looking for a good read, check it out.