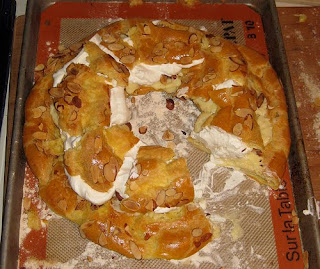 OK, it looks like a train wreck, but I'm happy when I make anything. And it tastes great, I gotta say.

This is known as a Paris-Brest Cake. We were watching an old episode of one of Jacques Pepin's cooking shows last weekend when he made this cake, which is supposedly shaped like a bicycle wheel to commemorate a historic annual bike race between Paris and Brest, France. It's made of a pastry known as Pate Choux, and filled with pastry cream and whipped cream.

It's basically a huge, round eclair, without the chocolate.

When Jacques made it, I said, "Wow, we should do that!" So we picked up the ingredients and with Dave's guidance, I made the Pate Choux and shaped the cake. (Technique: After filling a pastry tube with dough, and using the circular impression made by a pot lid as a guide, the cook squirts the dough in layered rings.) We baked it and Dave made the pastry cream and whipped cream (ok, so I didn't do all the work). We cut the top off the cake and layered the cream inside with roasted hazelnuts, and put the top back on. Voila!

The recipe was hilarious: a dozen eggs, two sticks of butter. Any doctor would blanch.*

But that hasn't stopped me from eating several pieces over the past few days. Is it any wonder I ran five miles yesterday, and went to the gym again today?!

Our only mistake was pulling the pastry out of the oven a tad too early. This caused the cake to fall a bit, making it harder to cut and layer with filling (and making it far less photogenic). But the inside was cooked enough so that the pastry is formed, and I was pleased with the results!

*The linked recipe is not the one we followed, which was from Dave's culinary school books. This one is significantly lighter, or maybe just smaller.
Posted by Steve Reed at 6:21 PM