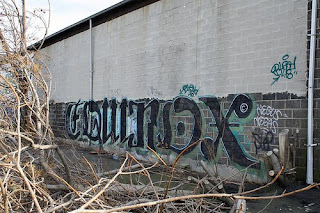 This has been a busy week!

On Tuesday I went to Perth Amboy, on the New Jersey coast near Staten Island. A friend on Flickr had told me about a hot graffiti spot there, so I drove over and checked it out. Among the many pieces I found was this one, "Equinox," which is pretty great, if you ask me. Nice colors, nice lettering, nice proportion.

It was a fun drive. I always like exploring new areas, and I found several more graffiti sites along the way, so it was a productive afternoon of photography. At one point I found myself scrambling through brush on the side of a highway overpass, so it was kind of an adventure, too!

Then, yesterday, I had to go into the city for a meeting. When I registered to collect unemployment -- which as I understand it is paid by my erstwhile employer for a period of weeks on my behalf -- I was told I had to attend a mandatory meeting at an unemployment office. As you can imagine, it was bureaucracy in action. 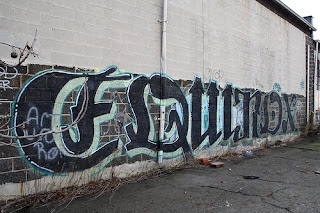 I suppose if I knew nothing about how to search for a job, it might have been helpful. The presenters talked about the services their office could provide (mainly things like help with resume writing and basic training on computers). I filled out some forms. Then I met individually with an employment counselor who spent most of the time talking about the wonderful view of Central Park from Bergdorf-Goodman. (I was thinking, "I'm unemployed. Do I look like I'm going to Bergdorf-Goodman anytime soon?")

The counselor did tell me that she thought the print size on my resume was too small, and I should enlarge it. So I suppose that was something.

Then I went to meet my friend Dan for lunch. Dan's partner Jimmy is on the City Council in New York, and he was taking part in a press conference on behalf of our senator, Kirsten Gillibrand, who is emphasizing her support for gay rights as part of her reelection campaign. Dan and I stood on the steps of City Hall and watched the press conference -- in 20-degree weather. It was interesting because I'd never been to New York City Hall, and although I've been to tons of press conferences as an ideally objective reporter, I've never been to one where I could actually applaud and express support for the subject at hand.

We had lunch in the historic Woolworth Building in lower Manhattan, and then I caught a train back to New Jersey, carrying a heavy backpack containing all my dishes. (Dave decided he's sick of his own dishes, so I shlepped mine out from the city. Fortunately it's a small set!)
Posted by Steve Reed at 12:04 PM