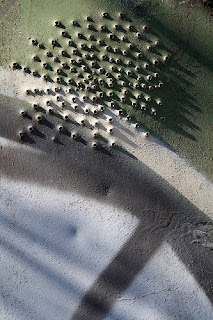 I spent this morning giving a bath to my four-legged pals, Ernie and Ruby. They're very clean dogs, usually, since they spend all their time inside and they're not a particularly malodorous breed (unlike, say, black labs). We can usually get away with bathing them every couple of months.

But lately they'd been smelling a little doggy. They have a nice, toasty smell -- Dave likens it to Fritos, and he's right -- but even that can gradually get too intense. There's such a thing as Too Much Frito.

They aren't particularly crazy about bath time, so the routine goes like this:

1. Lure the unsuspecting tail-wagging dog into the bathroom with soft approving noises.
2. Block its escape when it understands what's coming.
3. Hoist all 45 pounds into the tub.
4. Baste liberally.
5. Douse with shampoo.
6. Scrub, while simultaneously frontally blocking the dog's insistent push toward the edge of the tub.
7. Baste repeatedly, continuing frontal block, until all suds disappear.
8. Remove wristwatch you forgot to remove at beginning of procedure, and hope it will still work.
9. Grab towel and shroud dog before it has a chance to shake.
10. Allow dog to escape tub, and towel vigorously. Realize dog must basically air-dry.
11. Watch with dismay as dog shakes.
11. Repeat procedure (except step 8) for second dog.
12. Spend half an hour cleaning the bathroom.

I did the best I could, though it was hardly a professional job. They're far less Frito-ey now.