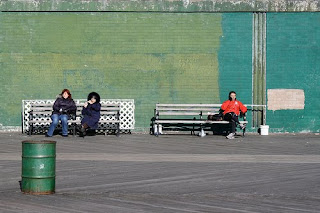 Yesterday morning I took the train into the city and went out to Brighton Beach, in Brooklyn. I'd never been there, and I wanted to check out this area that Neil Simon made famous in his stage play "Brighton Beach Memoirs."

When Neil Simon lived there as a boy, it was a largely Jewish community. Now it's very Russian -- perhaps still Jewish, I don't know. Many of the signs are in the cyrillic alphabet, and the stores clearly cater to the neighborhood's Russian clientele.

I was surprised not to find much graffiti, at least down at street level. (There may have been more up on rooftops, where it could be seen by the passing elevated trains.) But there was still plenty to photograph, especially with such crystal clear light and a cloudless sky. The old Russians were out on the boardwalk, taking in the sun, even with temperatures that were far from balmy. 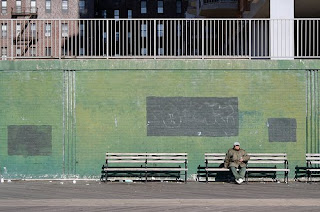 When I was done walking around Brighton Beach I made my way west to nearby Coney Island and had a hot dog at Nathan's. Then I hopped on the train and came back to Manhattan, where I stopped by the offices of my erstwhile employer to have coffee with my friend Kenneth. Both of us lost our jobs in the most recent round of layoffs, though Kenneth is working through February -- we just traded gossip and caught up on all the drama.

Dave came into the city last night and we went to see the pianist Markus Groh and the Tokyo String Quartet at the 92nd Street Y. It was an all-Beethoven program. I've never been a huge Beethoven fan (Schroeder would be appalled!) but I particularly enjoyed Groh's performance -- from where I was sitting I couldn't see the keyboard, but I swear the guy must have four hands.
Posted by Steve Reed at 1:05 PM