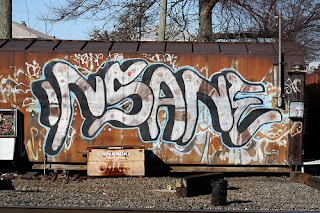 For months now, as I've ridden the train between New Brunswick and New York City, I've been taunted by amazing graffiti in various spots along the tracks. A couple of times I've gone out to photograph this graffiti, but it's been hard because I didn't have a car and was restricted to areas near train stations. And forget shooting from the train -- there's no time for composition, and all I can ever get is a big blur.

Yesterday, I finally had a chance to take Dave's car on a graffiti adventure. I set out about 9 a.m., and drove State Road 27, which roughly parallels the train tracks through Edison, Metuchen, Rahway, Elizabeth and into Newark. I then pushed a little farther into Harrison, across the river from Newark, and got some good shots there before turning for home.

I'd already scoped out several hot spots using the GPS feature on my iPhone. (I hate to sound like an advertisement for Apple, but this phone has definitely changed my life!) While riding the train home on Monday, I watched and remembered where the good stuff was. So all I had to do was go back to that spot with the car and hope I could get access to the graffiti, either by sneaking through holes in fences or with the use of my Christmas-gift zoom lens. I was successful in every case.

There's still more to be shot, though -- so here's to future car adventures!