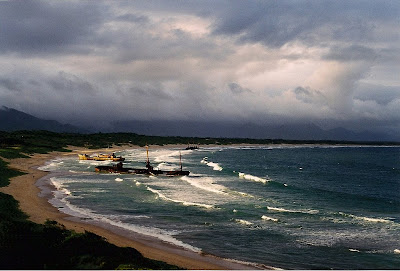 I'm working on scanning a bunch of my old photos. I have about 20 photo albums full of pictures, and I don't see any reason to schlep them all the way across the ocean. I figured I'd just save the best of the best in electronic form. Paper photos seem so old fashioned!

It's been a lot of fun, because some of the older photos are horribly discolored. I can tweak them on the computer and watch them literally come back to life. It's pretty amazing!

The photo above is one of my favorites. It's from Taolagnaro, also known as Ft. Dauphin, at the southern tip of Madagascar. I went there in 1999 to visit my friend Kevin, who was working in the capital, Antananarivo, at the time. During my visit, I took a little prop plane down to the southern coast on my own for a few days, and stayed in a bleak little motel with this spectacular view of the beach. Those are old, rusty ships that have been abandoned on the shore, presumably awaiting scrapping. (They've since been removed, according to Google Earth!)
Posted by Steve Reed at 10:58 AM

that really is an amazing photo. i made it large and got lost in the cloud formations and the imagined sound of the waves rolling in.

Wow, this is a huge undertaking. I admire you for doing it but I guess the motivation is there. Beautiful photo.

You are so practical! I'm really impressed that you are taking this on. I can only imagine you have converted all your vinyl records to digital format also, yes?

BTW, if I get lazy and comment under my gmail account, it looks like a different person. I wish I could figure out how to roll my Blog over into my current email account. It would make life a lot easier!