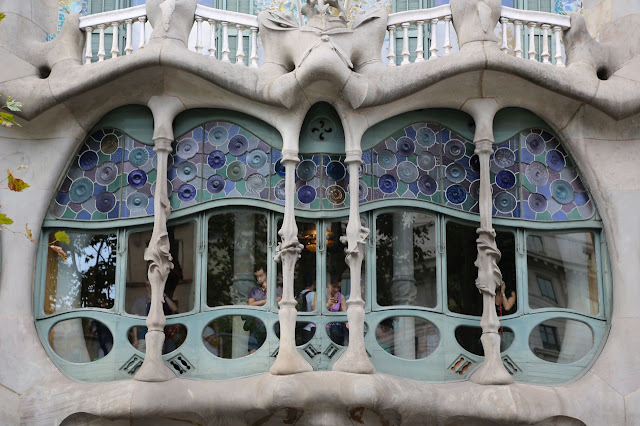 Yesterday was a day of more bizarre and unusual Antoni Gaudi architecture. We went to see Casa Batllo, known as the "House of Bones," and took a terrific, detailed audio tour of the interior and roof. It's a beautiful, colorful building, and I think it surpasses La Pedrera, even though that was touted as his finest residential achievement. 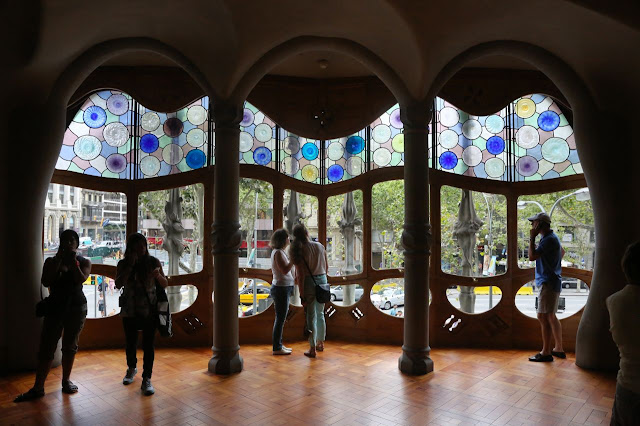 Wouldn't you love to have that as your living room window? Wow! 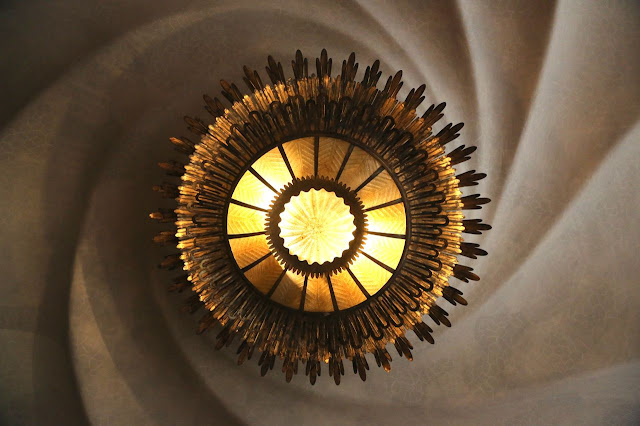 There's also quite a light fixture in the swirling ceiling of the room, said to be inspired by an eddy of water.

From there we went to La Sagrada Familia, Gaudi's huge cathedral and certainly his most famous building. But you know, we got there around lunchtime, and the line of people waiting to go in stretched literally around the block. Dave and I had lunch at a cafe across the street while we gazed at the building, and though it may be heresy for me to say, I'm not all that into it. It's too much of a hodge-podge -- the newer parts look really new, the older parts look really old, and there's a huge disconnect between the elements, it seems to me. There's some controversy about whether it accurately represents Gaudi's designs and intentions, given that the original plans for the cathedral were lost in the 1930s. Plus there's a heck of a lot of scaffolding. To make a long story short, we decided not to go inside.

I know, I know. How can we come to Barcelona and not see its most famous building? All I can say is, when I first went to Paris in 2000, I didn't go up in the Eiffel Tower because it was similarly crowded, and I lived with that decision easily. So I think I'll be fine with this one too. 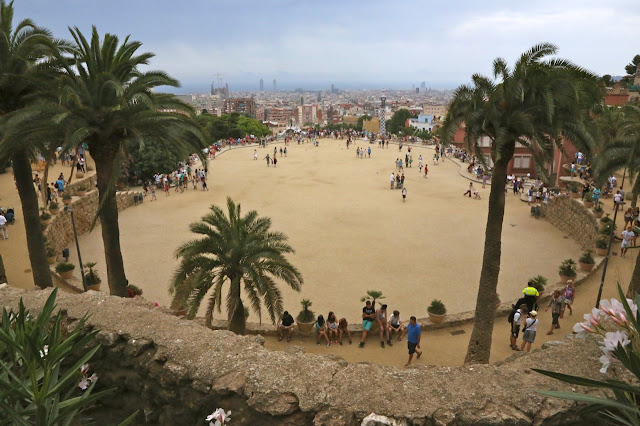 It doesn't look that crowded because the field above is a large space -- but trust me, there were so many people all trying to take photos of the same things, we had our elbows in each others' faces. My guidebook says the park gets 4 million visitors a year, about 86 percent of them tourists! 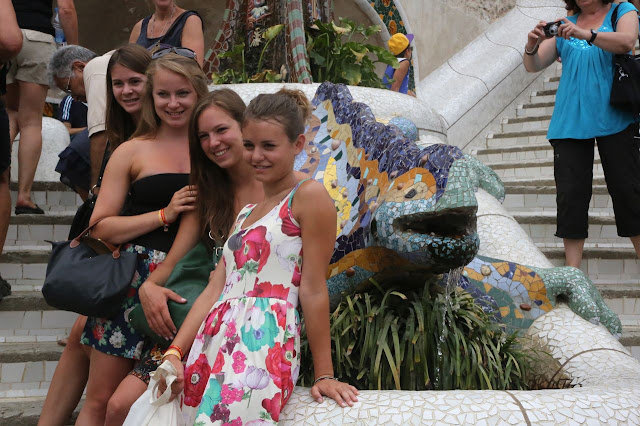 This lizard is a famous feature created by Gaudi, and let me tell you, everyone wanted a photo with the lizard. Dave and I didn't even see it when we walked past the first time, because from a few steps away it looked like a seething ball of people. I gave up trying to get a photo without anyone in it!

And here, the day took an unfortunate turn. I had started feeling a little odd at La Sagrada Familia, and by the time we were walking through Park Güell, I was achy and feverish. I bought some aspirin on the way back to the hotel, and I felt well enough to go out to dinner last night (fortunately my digestion is fine), but I am definitely ill. I don't have a thermometer so I can't measure my temperature, but it's pretty high. I don't have any other symptoms, though -- no cough, no sniffling, no gastrointestinal issues. It must be Gaudi Fever!
Posted by Steve Reed at 6:45 AM