La Barceloneta (aka The Beach) 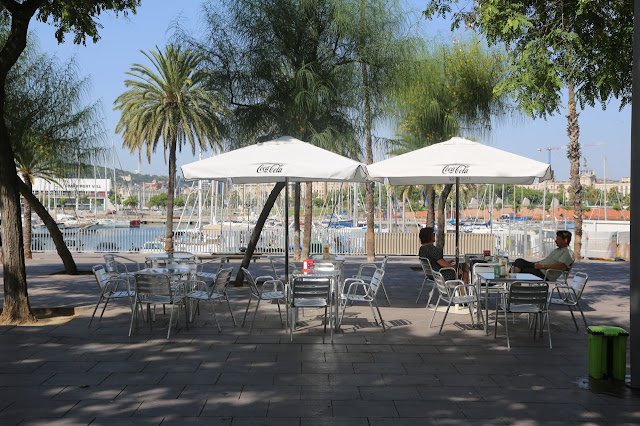 Yesterday morning, despite feeling somewhat achy-shaky, I set out with Dave to go to La Barceloneta, the beach district of Barcelona. It's on a peninsula bordered on one side by a modern marina lined with cafes, like the one above, and on the other by the Mediterranean Sea. 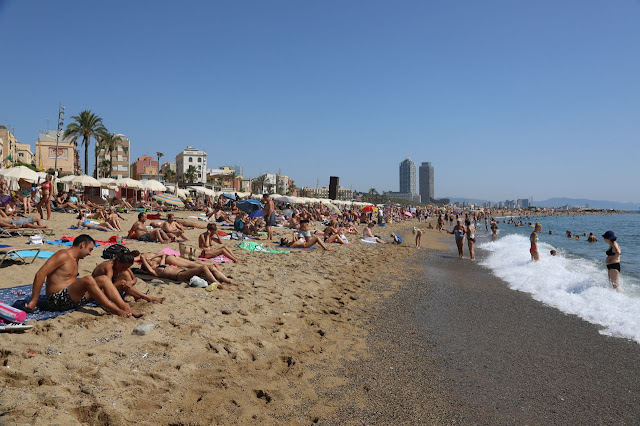 There's a long beachfront that at least on this particular Sunday was quite busy. Dave and I walked down to the water just long enough to put our feet in the Mediterranean, so we could say we'd done it. We're not really beach people, though, so we didn't lie out on the sand. 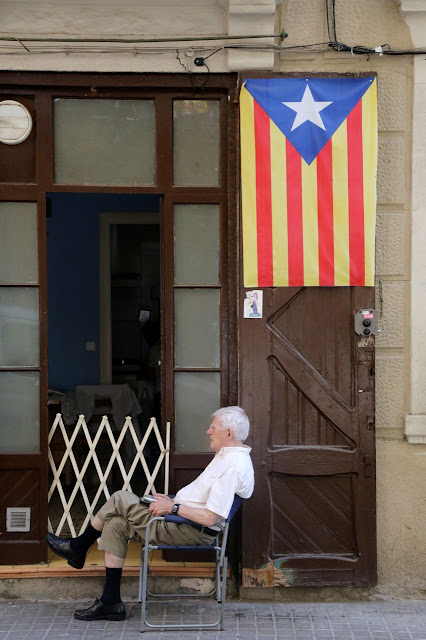 Instead we walked the tiny, narrow streets in the interior of the Barceloneta peninsula, the remnants of an old fishing community. It's now busy with bars, clubs and restaurants, but there are also lots of quaint apartment buildings and it seems pretty densely populated. It reminded me a lot of Morocco, with the stucco walls in pastel colors and the bright Mediterranean light.

That flag above, by the way, shows support for Catalan independence from Spain. Barcelona is in Catalonia, a region with its own language -- for example, Catalans say "adéu" for goodbye, which sounds a bit more like the French "adieu" than the Spanish "adios." There's a push for Catalan statehood -- apparently many Catalans feel that when it comes to Spain as a whole, they give more than they get.

I've been speaking Spanish, since I obviously don't know a word of Catalan (and I don't mean to overstate my skills, because I barely know Spanish) -- but it's occurred to me that it may be kind of weird for me to speak Spanish in Catalonia. Who knows? I certainly don't want to take sides in anyone's internal politics! 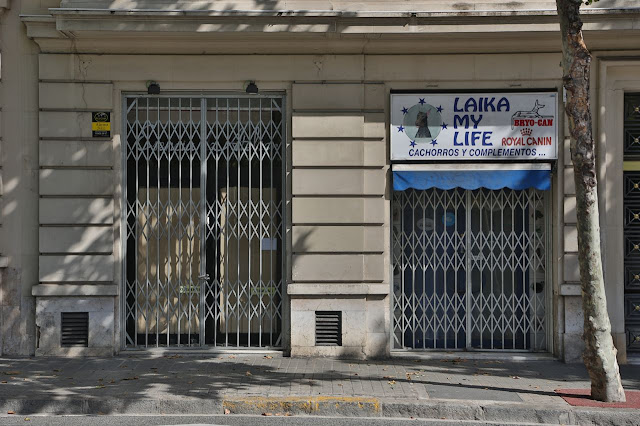 When Dave and I were on the tour bus Saturday, we drove past this pet shop, apparently named for Laika, the Russian space dog. In the 1950s, Laika was sent into space in a Sputnik capsule in order to see how life forms would survive in that environment. Unfortunately, the Russians had no way to get Laika back down again. Her sad story has long intrigued me, so when I saw the shop, I knew I had to get a photo of it.

Yesterday afternoon, after a huge lunch of seafood and paella at a beach cafe, I was feeling much better -- my fever and achiness seemed to have subsided. So while Dave came back to the hotel I hopped on the Barcelona metro to go in search of Laika. I found the shop again with no trouble -- sadly, I think it's permanently closed -- and then walked back to our part of town, which gave me a chance to wander a few hours through less touristy parts of Barcelona. I stopped for a cafe con leche, spoke Spanish and savored the thrill of the adventure.
Posted by Steve Reed at 7:10 AM