On the Nature of Change 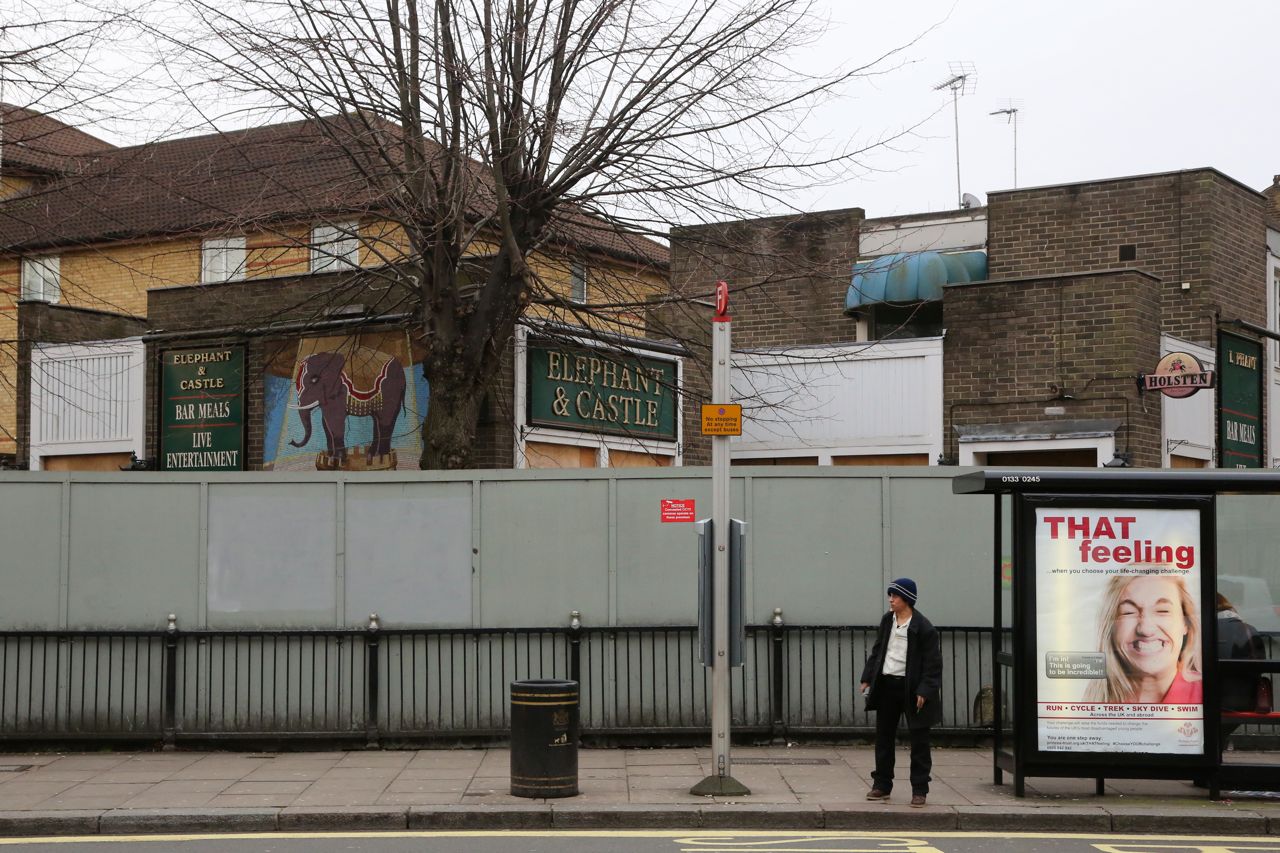 Nancy mentioned change in response to yesterday's post -- specifically, that change comes to all things, and while there is sadness when the world of one's youth changes, that change is also inevitable. That's certainly true. All of us feel sadness when the vacant lot next door is replaced by a house, or when our favorite high school hangout closes, or the local mall goes from being shiny and new to bedraggled and tawdry.

But I also suspect that Floridians feel environmental changes especially acutely, because the pace of change has been so accelerated in that state (and in other popular "destination states," like California, Arizona, Colorado or North Carolina). Those feelings are accompanied by a sense that what we're losing can never be regained. I'm not sure people in Ohio or Illinois or Michigan feel quite the same way, because I don't think they've faced the same development pressures, at least not in the modern era. (Maybe their sense of loss goes in the other direction -- that their developed communities are declining, a la Youngstown or Detroit.)

Anyway, if there's one thing I learned from my Buddhist practice, it's that change is constant and nothing is permanent. Which doesn't mean we don't feel it -- but clinging to the way things were does inevitably cause pain.

I guess I'm not saying anything that everyone doesn't already know. Right?

Dave and I went to see "American Hustle" yesterday. We found the plot a bit convoluted but I enjoyed the costumes, the music and the performances. I remember plenty of fashions from the '70s but nothing quite like what some of the women in this movie were wearing -- necklines plunging to the waist and that sort of thing. But then, I wasn't traveling in Long Island Mobster circles. 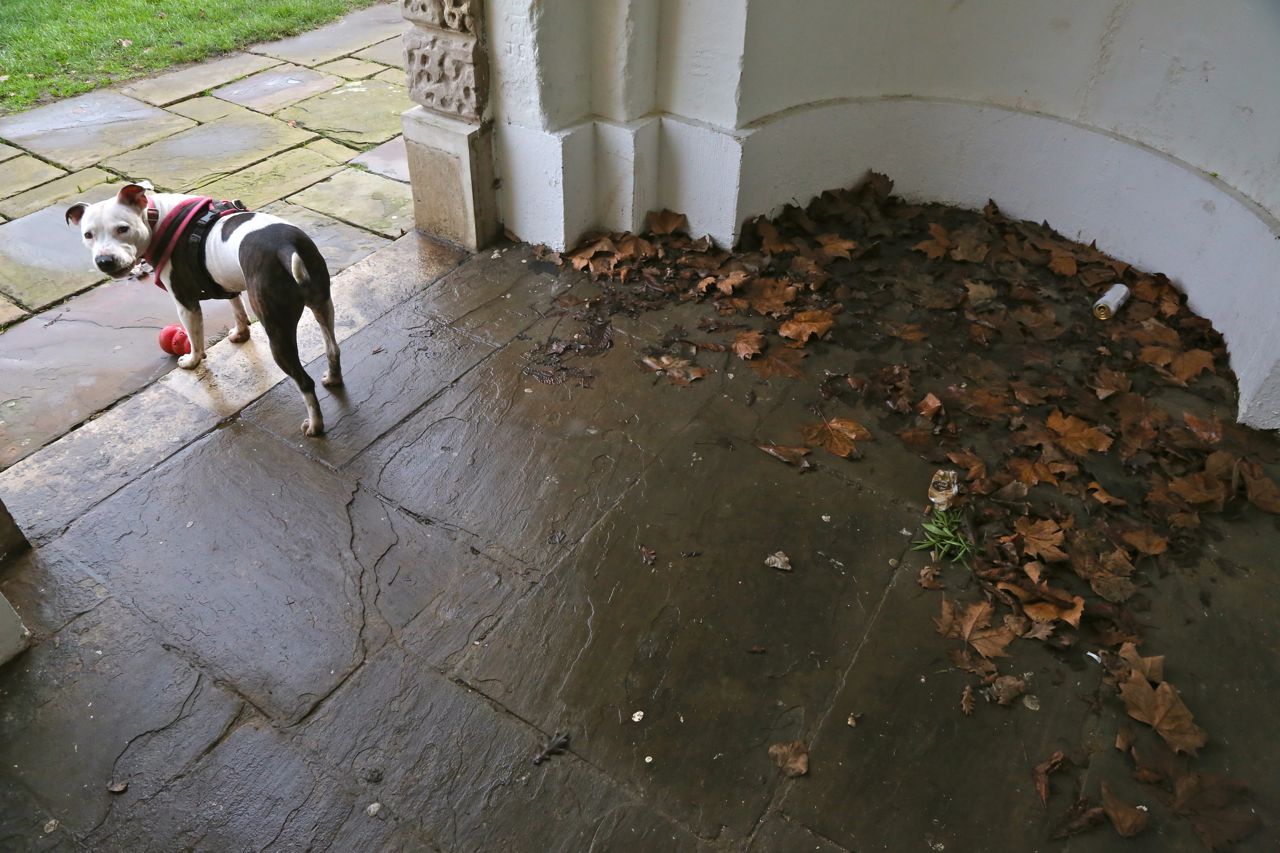 Olga and I walked in the park yesterday morning, as usual. Here she is in the leafy, beer-can-y interior of Queen Caroline's Temple. She is clearly impatient with my photography and ready to go chase her Kong.

(Top photo: Street scene on the way to work, Friday morning.)
Posted by Steve Reed at 7:54 AM

Thanks for the reminder about change and the wisdom in not fighting it.

We are a complicated species. We grieve.

So do elephants and dogs and many other animals. It's an interesting phenomena. A central core in many (all?) religions has to do with techniques to help us bear the suffering of grief. We learn to meditate, pray, gather with community. I love the structure of grieving rituals from many different traditions.

The fact that we have these rituals speaks to how intrinsic grieving is.

A wonderful post and I love the picture! That feeling! Oh yeah.

Olga is looking at you the way I look at Mike when he dawdles too long in the coffee aisle :)

My grandmother's house in NC was torn down a few years ago, and I did grieve that (although it was in terrible repair). I can remember playing there & staying overnight. But I mostly have a TERRIBLE memory. Which I guess helps me not mourn changes too much.

It is a constant miracle to me that my old childhood village is still relatively the same as it was fifty years ago. At least a portion of it.
And my god, it is beautiful Florida.
Yes, change is constant. But sometimes, we can find a tiny bit of consolation in that which remains as we remembered. But it is so rare.

the only thing that doesn't change is that things always change. right now, here in Houston, the school board has decided to replace four school mascots...Indians, Warriors, Redskins (my old high school), and Rebels. The ones alluding to First Nations people I can understand, but Rebels? It is of course a reference to the Confederacy but a rebel also is just someone who rebels. anyway, there is a big contingent of alums that are incensed that our old high school is going to change its mascot. they even went before the school board to argue for keeping it. I totally don't get it, high school has been over 40 years ago and they are still invested in it? get a life people.

I have recently felt nostalgic for many things and people that are gone forever. Yesterday I found myself thinking about how I wished I had really talked to my parents about their lives instead of concentrating so hard on mine and the needs of my family. I'll bet there were a lot of stories I never heard. And why is it that it took decades after their passing for me to think about this?

You are so right about the pace of change in destination states. When I first moved to Arizona from Illinois, it was a bit of a shock to see how quickly things changed. I remember going back home for a visit one time and noticing that a new store had opened at the shopping center and mentioning it to someone there. Their response was "yes, everything changes". I didn't say it but since that was just about the only change I noticed, I was thinking "you have no idea".

Change and grief go hand in hand, I think. But as the Bonos said, "The beat goes on."

I just posted a photo of a house going up on my street that is a McMansion -- completely dwarves the other houses around it which were all built in the 1920s and are California bungalows for the most part. This gigantic house going up makes me so angry -- riles me in a way that I haven't felt riled before, so your words about change and clinging and suffering are particularly resonant. I thank you!

And I, too, saw American Hustle and thought it was entertaining and fun but very superficial. And I agree that the plunging necklines were, perhaps, license taken?