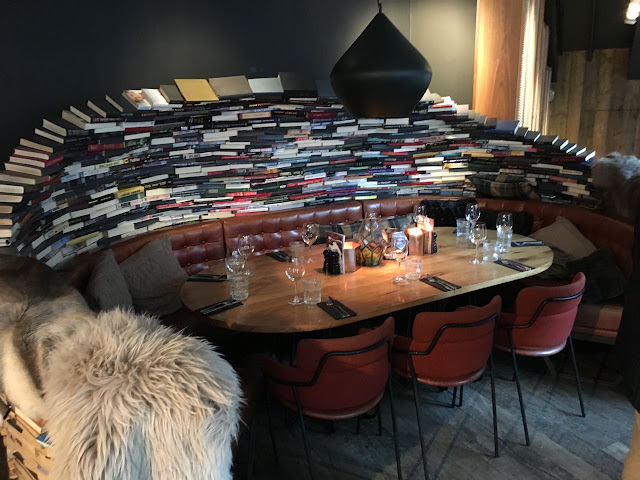 I went out with my library colleagues last night after work. One of them organized a "Librarians Gone Wild" evening at a bar and restaurant near Farringdon. She investigated literary-themed restaurants and when she saw a picture of this table online, with its comforting womb-like enclosure of books, she immediately decided, "That's the place!"

Actually getting this table proved to be a bit of a challenge. She asked for it when she made her reservation and explained that we were librarians, but when we got to the restaurant the hostess was reluctant to give it to us. (Apparently it seats 10, and we were only six.) She seated us in two different places before the manager intervened and gave us the book table after all. Victory!

We had a great time, and eventually managed to both break a glass and spill wine on ourselves.

A casual evening out is an excellent bonding activity! 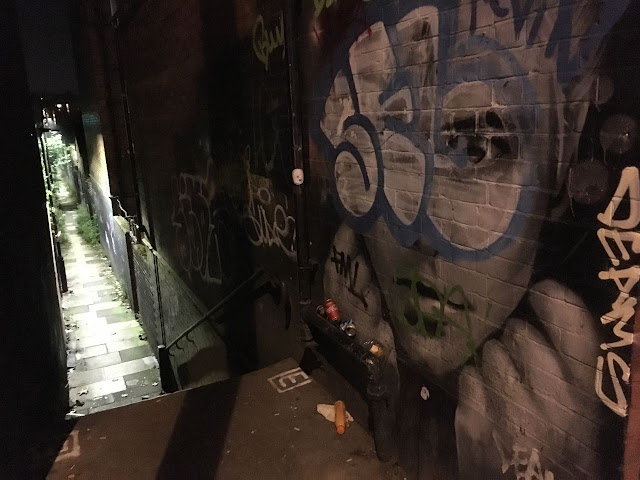 On the way home I snapped this picture of West Hampstead's rather forbidding Billy Fury Way, a footpath between West End Lane and Finchley Road. It's well-lit at night (as you can see on the left) but I would still do my best to avoid walking it after dark. And the mural, unfortunately, remains defaced after someone tagged it with graffiti earlier this year. One of the grittier corners of our little neighborhood!
Posted by Steve Reed at 7:01 AM