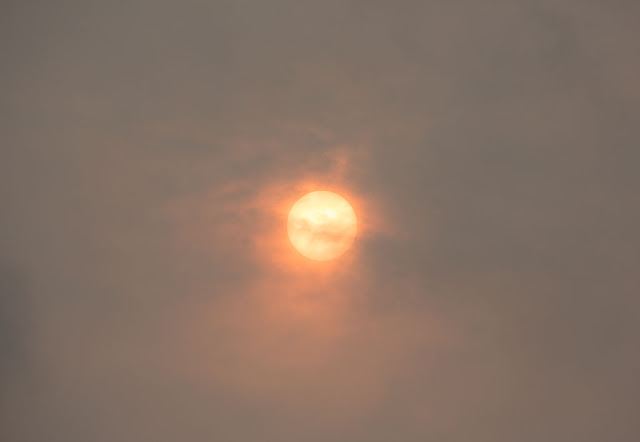 The light was so strange yesterday afternoon. At broad midday, about 1 p.m., it seemed more like sunset -- the sun was orange, the land shadowy, the sky a cloudy, sickly yellow-gray. I said to Dave, "Is the world ending?!"

At times, it seemed really dark outside -- way too dark for early afternoon -- but there was no rain. When the sun did shine, it came in intermittent red-gold bursts. 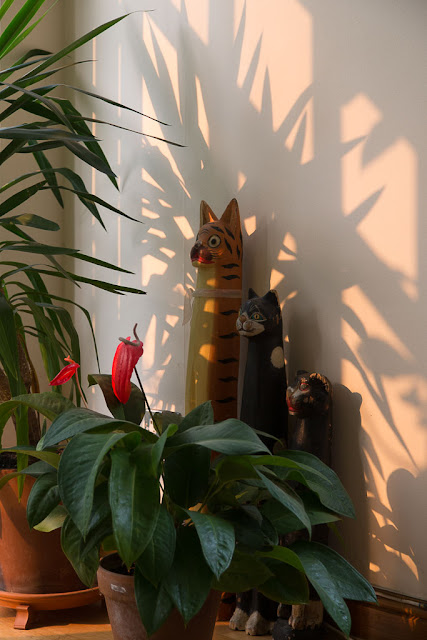 Wabi, Sabi and Bobby were not amused. Wide-eyed with fright, in fact.

Apparently this had to do with Hurricane Ophelia, the weather oddity that swept up from Africa and dragged with it a lot of Saharan dust and particles from fires in the Iberian peninsula. All that debris in the air filtered out light from the blue end of the spectrum, leaving us basking in a red-yellow glow.

It was very creepy.

Earlier in the day, everything was normal enough. The tree crew came bright and early, just after 8 a.m., and took down the spindly holly and trimmed the rest of the shrubbery in the garden. There's a lot more light out there as a result, peculiar though it was in the afternoon, and hopefully our plants will get an added boost next season. (And hopefully we won some points from Mrs. Kravitz, our holly-hating neighbor.)

I was concerned about the tree guys stomping all over the flower beds and dragging branches across them, but they did a great job and nothing seems to have any permanent damage. We didn't solve all the tree problems -- there's also a walnut tree that's leaning toward the house and needs some trimming of its own at some point. But the landlord can handle that. I think we've already been quite generous to pay for what we have.

Dave and I have gone on a Jane Fonda movie kick (well, to be completely honest, I have, and I'm dragging a grumbling Dave along with me). Last night we watched "On Golden Pond," which reminded me that I had a huge crush on Doug McKeon back when we were both 14-year-olds, and tonight we're going to tackle "Barefoot in the Park." I have a need to show Dave these movies, even though he's not particularly a movie fan and doesn't particularly want to see them. Is that selfishness on my part? Or am I right to want to share with him meaningful artifacts of my life? I can't decide.
Posted by Steve Reed at 6:26 AM