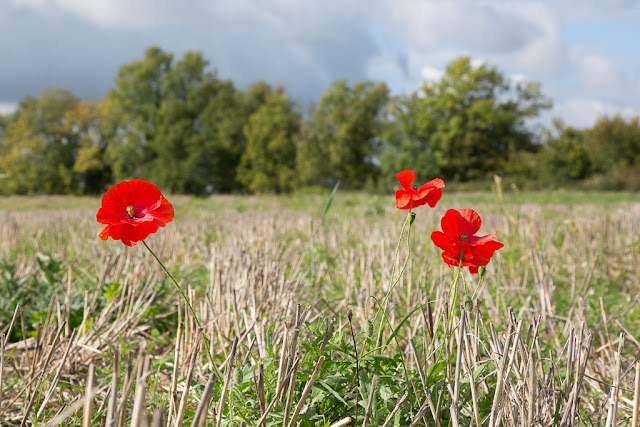 Here's another shot of the poppies I found growing in a field down in Bromley on Sunday. A last gasp of summer!

After yesterday's post about the new pound coins, some of you asked for a picture of the new design. Wouldn't you know I don't have a single pound here at home to photograph? I was too efficient in spending them, apparently. Here's a picture and some more detailed information on the Royal Mint web site.

Oh, and I completely agree with those of you who suggested doing away with pennies. Pennies are the most useless coins ever, both in the states and in the UK. Here, to make matters worse, we have both pennies and two-pence coins! I'd get rid of both of them. We should just round everything to the nearest five cents (or pence).

I am having such a quiet week at work I barely know what to do with myself. I spent more time weeding shelves yesterday, and I'm finding a fair number of books of questionable value. A 2000 book on the controversy surrounding physician-assisted suicide, for example, that has never been checked out. Not only is it apparently not useful to our students, it's 17 years old -- and surely out of date by now. I think any student doing a project on that subject would research it primarily on the web, where the information is more current.

Yesterday I found a hard-boiled egg sitting on the couch in the silent area. Very peculiar -- considering we don't allow food in the library. I'm sure some kid brought it from the cafeteria and it seemed cold and fairly fresh, so I put it in the office fridge to bring home to Olga. But then I forgot it, so she'll have to wait until tonight for her treat!

Oh, and I finally made reservations for our trip to Cambridge over Thanksgiving. We found a hotel with some character just a bit out of town, so Olga has grassy areas for running and playing. It's good to have a plan!
Posted by Steve Reed at 6:18 AM