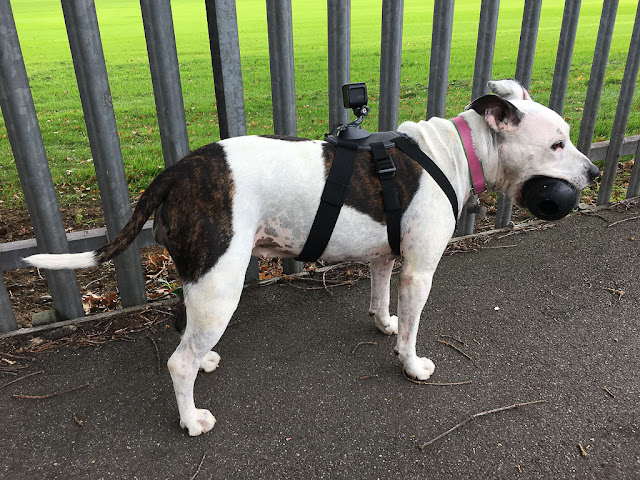 I finally had a chance to make a video with Olga's new GoPro camera and harness. She wears it well, doesn't she? She doesn't have the humiliated look of some dogs forced to don alien gear, like Halloween costumes or neck cones.

Anyway, I walked her to Fortune Green yesterday, strapped the camera to her back and played Kong with her, and then walked her through the cemetery. I got about half an hour of footage, and I came home and spent about three hours learning enough about iMovie to edit it into a five-minute video:


And here's the crazy end result! It's a bit chaotic at the beginning, when she's running, but I added slo-mo to the second run so it wouldn't make us all feel ill. I had fun putting this together and hope it's fun for you to watch!

Incidentally, it's funny how people react to the camera. One woman, a jogger, seemed very amused; another wanted to know whether I was filming to prove my dog "didn't do it." (I guess "it" means anything bad!)
Posted by Steve Reed at 7:07 AM