Smoking at the Open Cafe 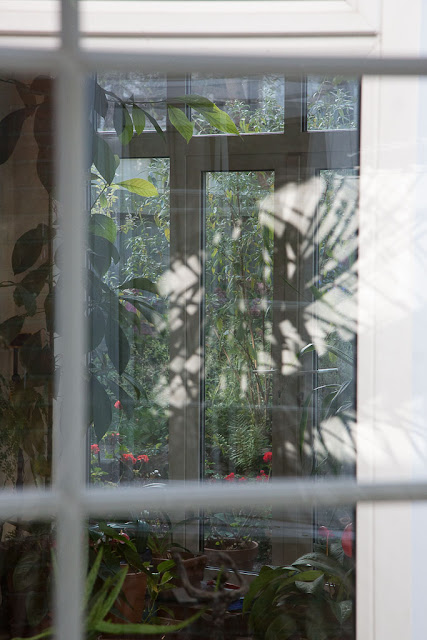 About the most exciting thing that happened around here yesterday is I finally finished my book. And I finished most of a New Yorker, which was interesting (as usual) but included a dispiriting article about Mike Pence and his many connections to the same old cadre of Washington, D.C. string-pullers like the Koch brothers. Those people have their fingers in everything. I despair for the environment, the climate, the wilderness, when they're pouring millions into looking out for their own profits and business interests.

Their approach seems awfully short-sighted, doesn't it? Do profits mean anything when the world is aflame and being raked by ever-more-powerful hurricanes? I guess the Koch brothers don't care. They're going to be ensconced in some hurricane-proof fortress.

But anyway, let's not go down that rabbit hole. I took Olga to Fortune Green and the cemetery in the afternoon, and I watched a Channel 4 documentary about George Michael that was interesting -- Michael was working on the film when he died, and it reminded me of many things I'd forgotten about his career, like his long contract dispute with Sony records that paralyzed his productivity for a time in the '90s and the death of his boyfriend from AIDS.

I also typed up some more journal entries. I'm up to April 2000 and a trip I took to London and Paris with a friend -- my first visit to both places. Who knew when I was walking around London back then that I'd eventually be living here? Life is so strange.

I wrote about one memorable evening at a bar in Paris called the Open Cafe, which I happily discovered is still there. Apparently I was quite enamored with our chirpy Bohemian pigtailed waitress, in a purely platonic I'd-like-to-be-your-roommate kind of way. My friend and I drank like fish and decided to smoke cigarettes -- a "when in Rome" impulse -- and then went dancing, and I paid dearly the next morning. It's the only time I've ever smoked tobacco, aside from a few experimental months in college when I puffed but never inhaled, and I walked around Versailles the next day with a terrible hangover.

(Photo: Our plant-filled living room, seen through two layers of windows from the bedroom.)
Posted by Steve Reed at 7:01 AM