A Jug Handle, and D-Day 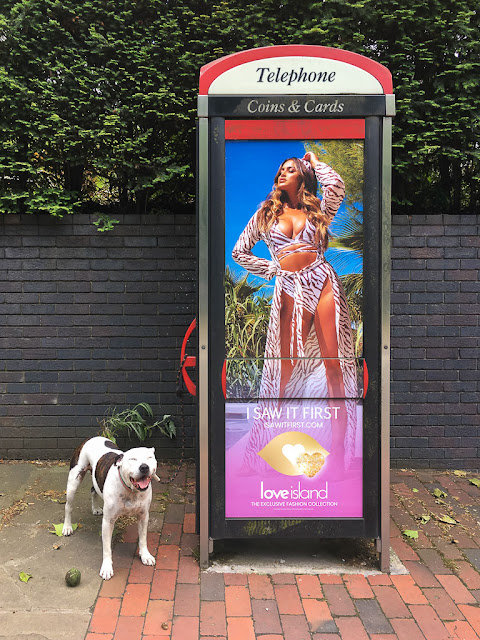 Well, yesterday didn't turn out quite as planned, weather-wise. What promised to be a rainy day instead was merely windy and intermittently cloudy. So I wound up taking Olga for a long walk -- we went on our West Heath route, where we saw this ridiculous phone box advertising the "Love Island" fashion collection. Even Olga couldn't help laughing.

Is "Love Island" on in the U.S.? It's a phenomenon here. I've never seen it but my impression is that it's a reality TV show chronicling the activities of scantily-clad young people at a beach resort. I walked past a couple of senior girls in the library the other day and saw that they were watching something on their computer featuring a muscular, shirtless guy. It turned out to be "Love Island."

Being the killjoy librarian that I am, I said, "Shouldn't you be doing something more productive with your school day?" The girls laughed and one said, "Probably." But I don't think they turned it off. 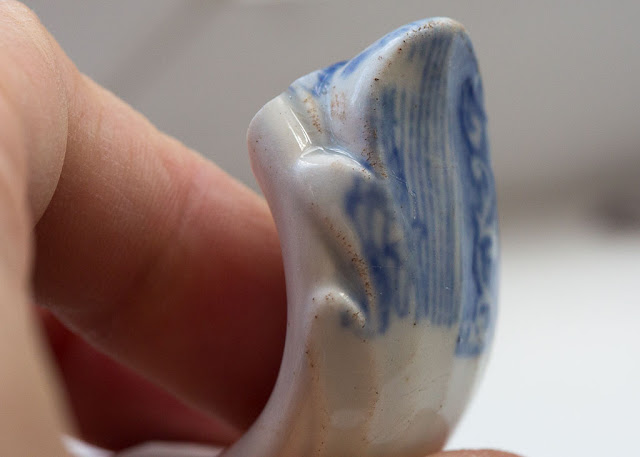 I found a couple of interesting bits of old debris on our Heath walk. This pottery handle must have come from a jug or tureen of some kind, probably 100 years ago or more.

And these bits of glass, marked VER and ER, are the remnants of an old bottle. River Water? Beaver Beer? Who knows.

I also found an abandoned buddleia, or butterfly bush, plant on the Heath. Its root ball was in a tight cylindrical shape, so clearly someone had dumped out a flower pot. It was just lying on top of the ground, so I brought it home -- you can see it behind Olga in that top photo -- and put it in a new, larger pot. Butterfly bushes are a persistent weed in some areas of the UK, particularly along railroad tracks, but in gardens they're beautiful and great for insects. 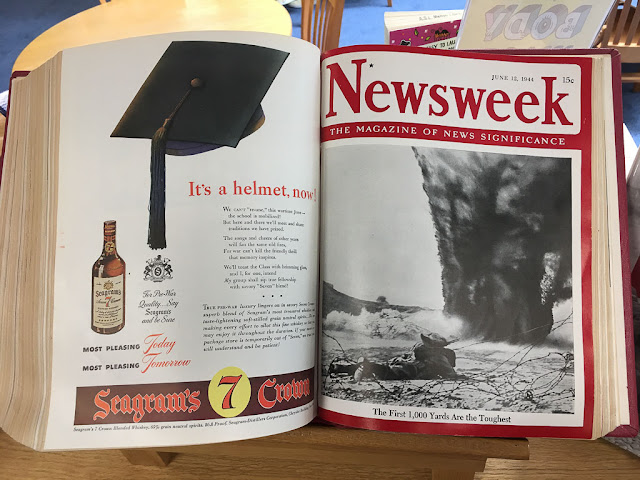 Speaking of old stuff, I never mentioned the 75th anniversary of D-Day, which passed last week. In the library we put out our old editions of Newsweek from that time period, so students could see real-time news coverage of the events. That had the unfortunate side-effect of also putting on display a Seagram's whiskey ad, but oh well. 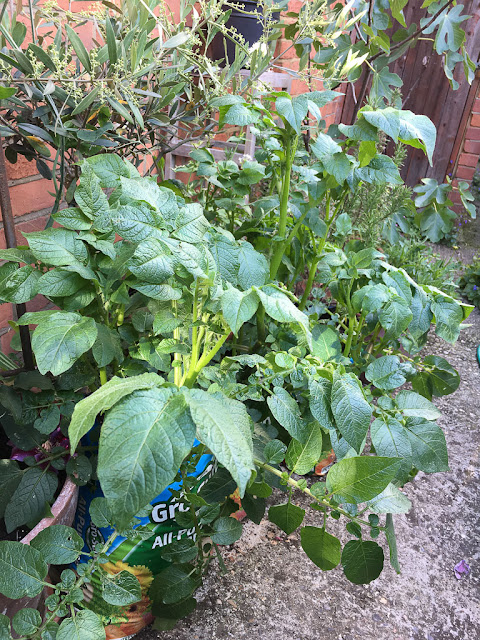 Finally, here's what our potatoes are looking like these days. They're like crazy alien plants, so robust and huge! I hope those soil bags are big enough to contain them. Dave's parents -- who come from families of potato-growing farmers in Michigan -- told us last night to wait until they'd stopped blooming, and then we could harvest. They haven't flowered yet, so we've still got some time.

I also read Halle Butler's short novel "The New Me" yesterday. I'd read about it in The New Yorker and it sounded fantastic, so I ordered it for the library. It's an interesting little book -- a portrait of a young woman who can't quite get her life launched, sabotaging herself in myriad ways and struggling with depression and emotional paralysis. It sounds bleak, and it is, but it's also weirdly funny in places. I enjoyed it.

I just watched a blackbird tear apart and eat a slug (YES!) and then an earthworm on our patio. Circle of life!
Posted by Steve Reed at 7:53 AM