More Flowers, and a Furry Visitor 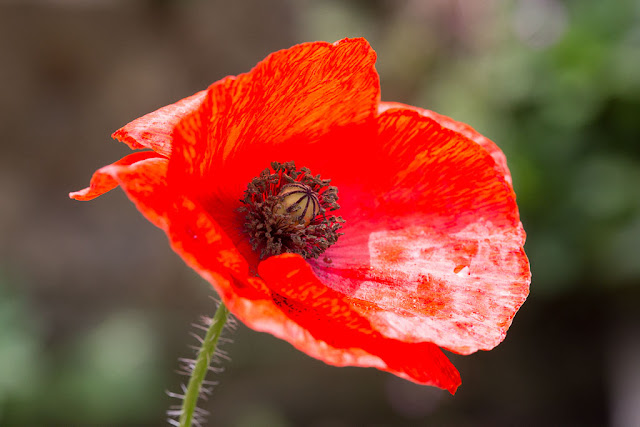 Saturday evening, I was lying on the couch reading, with Olga snoozing next to me. The back door was open, and Dave was somewhere else in the house. I saw movement out of the corner of my eye, and at first I thought it was a trick of my glasses -- it was right at the point where the corner of my lens met "real life." I turned slightly, and it was a fox -- INSIDE THE HOUSE, about five feet from the back door and two feet from me!

The fox was watching Olga, whose eyes were (fortunately) closed. I wish I'd thought to try to get a picture with my phone, but instead I said, "Get out!" and waved my arms. The fox scrambled, just like a character in a Bugs Bunny cartoon -- it ran in place for half a second on our smooth wood floor before its feet found purchase. All I could think was, "Oh my God, Olga is going to kill this fox in our living room." I was picturing the blood and wondering how I would clean it up.

But by the time Olga looked up from her nap, none the wiser, the fox had shot out the door. She didn't pursue it. I don't think she realized what happened.

I've heard of foxes coming indoors, but we've never before had it happen here. It was a young fox, maybe even a first-year cub. I had a package of cookies sitting on the floor, and I wonder if that's what brought it in. 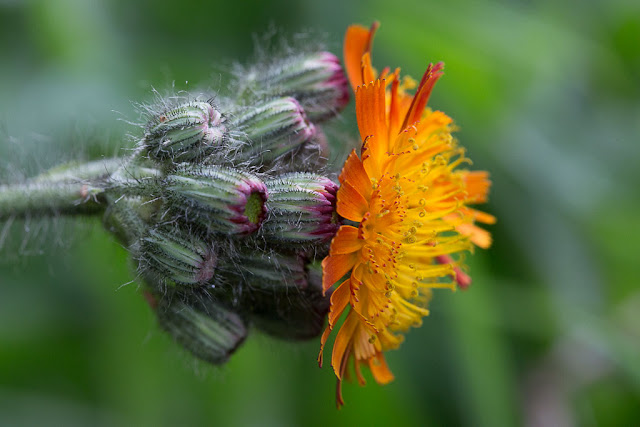 I spent yesterday in the garden. As you can see, there's still a lot going on. Our first poppy bloomed (top), and the first flowers opened on the hawkweed (above). Yes, that photo is oriented the right way -- the stem was bent sideways by the weight of the blossom.

The pink petals of our "Bowl of Beauty" peonies unfolded to reveal the shredded coleslaw at their centers: 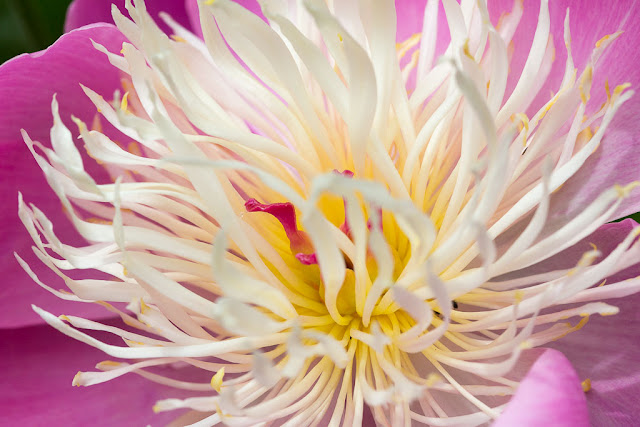 I mowed the lawn and did some weeding, and I FINALLY planted out the rest of my seedlings -- three burdocks, five honesty plants and three hollyhocks that had been growing in pots. All my seedlings are now in the ground, and it's sink or swim. The honesties seem to do pretty well once they're planted, so I have high hopes for those. The burdocks, on the other hand, tend to get nibbled by snails (or something) -- which is surprising since burdock is basically a weed. Some hollyhocks do better than others -- a few have been eaten -- but we have enough (18!) that at least a couple of them ought to grow big enough to bloom next summer. 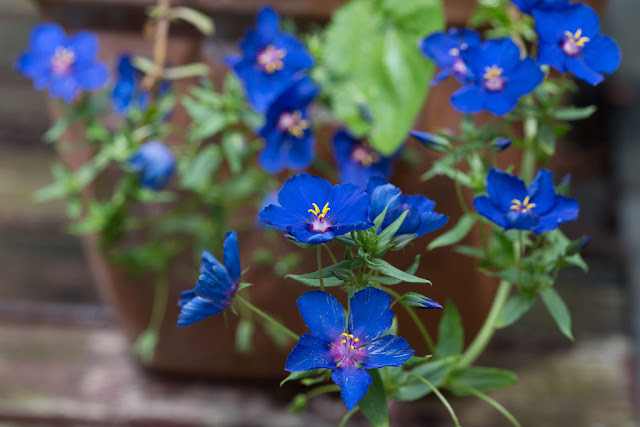 Our blue skylovers, a type of pimpernel, are flowering once again. They're supposed to be annuals, but this is their third year! They live in a pot on our patio and just keep coming back, and we haven't been doing anything to protect them in the winter.

Dave and I are watching a terrific TV show called "Chernobyl," a dramatization of the events following the explosion at the Russian nuclear reactor in 1986. It's a British production so I don't know if it's on in the states, but it probably will be at some point. I remember the day Chernobyl blew up -- I was a college student, working as a clerk in the tiny Tampa bureau of the St. Petersburg Times. (That's St. Petersburg in Florida, not Russia!) One of my colleagues heard about it and I think we turned on the TV to find out more. No one was sure how bad it was or what would happen -- there had never been a nuclear accident that big, but we'd all seen movies like "The China Syndrome" that predicted the worst. I don't know that I felt any sense of personal risk, but that might be because I was young and stupid.

I'm also still watching "Bloodline," which in last night's episode featured a murder with a conch shell -- fitting for a show set in the Florida Keys! (Key West is often known as the "Conch Republic.")
Posted by Steve Reed at 6:54 AM