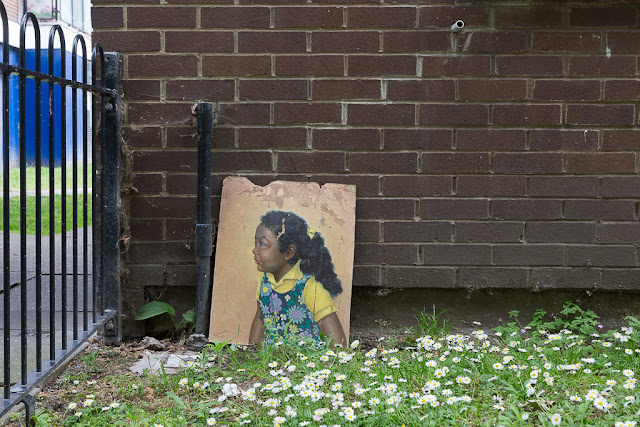 As we were walking to the Bethnal Green tube station from Lisa and Xan's house a few weekends ago, we passed this painting propped up against a building. It's signed "E. Sharland, 1969." As an example of found amateur art, it's not terrible. You've got to wonder who that girl is. She'd be my age by now, if not older.

Anyway, I hope someone rescues it. I like its battered wabi-sabi look. I'd have taken it myself, but we were headed to lunch and I didn't really want to carry it around. 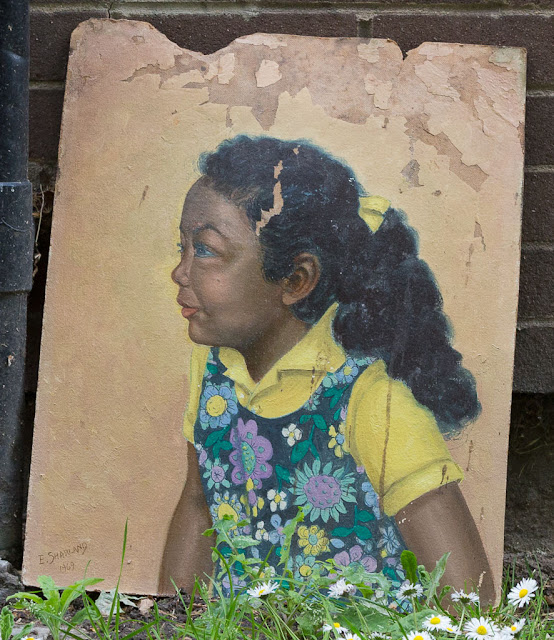 One of my readers helpfully posted an update about the restaurant in yesterday's photo, with information from its web site. Apparently the place is closed for renovation after a "kitchen accident." That tweaked a dim memory in my mind. I did some more Googling and sure enough, the Gung-Ho was involved in a fire almost exactly a year ago. I didn't mention it on my blog at the time, I don't think, even though it happened right around the corner, and I'd since forgotten about it. But anyway, that's why it's closed. (In addition, one suspects, to the fact that it was always empty -- although maybe it did a booming takeaway service. Clearly they were cooking something.)

I am still cranky about work. This time of year, when you'd think we'd all be happy with vacation right around the corner, is always so stressful for me. I had a mini-meltdown yesterday, in which I had to go take a walk around the building because I got so angry at my co-workers. (It's a long and boring story.) We've still got one more week after this, although not all those days are with students.

It doesn't help that we're at the time of year when the sun comes up at 4:30 a.m., prompting Olga to begin whining and beating her tail against the bed in an effort to wake us up so we can HUNT SQUIRRELS which, after all, is the meaning of life, as far as she's concerned. So I've been awake since shortly before 5 a.m. And darkness doesn't fall until almost 10 p.m., and I'm lying awake at night strategizing about how to get back all the rest of our materials within the next few days (which sounds silly, I know, but it's a fact) -- which all adds up to not getting enough sleep. Which makes me cranky.

At least we got some rain yesterday, which was much needed. The garden is still going gangbusters. Pictures to follow!
Posted by Steve Reed at 5:57 AM