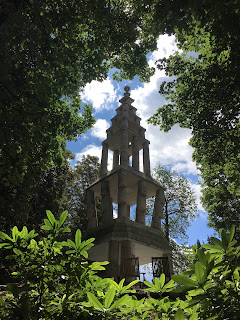 This is the stupa, a ceremonial tower, at the Buddhist Center where I’m staying. Like the mosaics I posted about a few days ago, this structure has connections with the center’s Nazi-era past. The columns were meant to be part of a grand entrance portico for the Nazi hotel. They were brought to the site, but the portico was never built. The columns were stored here and when the Buddhists took over the property, they were used for the stupa. This is meant to be symbolic of transformation. 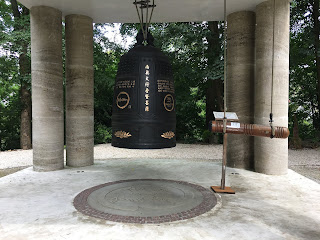 This bell is located in the base of the stupa and is used ceremonially.

This is our last day here. We depart around 3 pm (after several more sessions!) and I’ll arrive in London about 9:30 pm. This has been a good experience but I’ll be glad to get home. Maybe I’ll write more about it when I’m not on my phone.