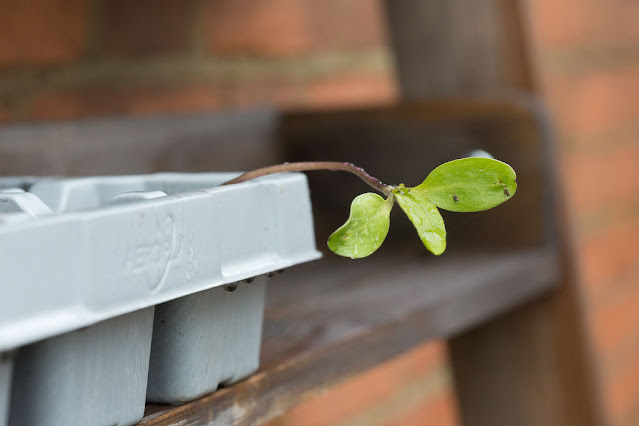 Remember those sunflower seeds I planted back at the beginning of May? Well, only one of them came up, and the poor thing was subjected to all manner of windstorms and rain and even hail. It wound up growing sideways (above), so last night I brought it inside, hoping that a little shelter on a sunny (ha!) windowsill might encourage it to grow upright.

This morning, I went to check on it and found this: 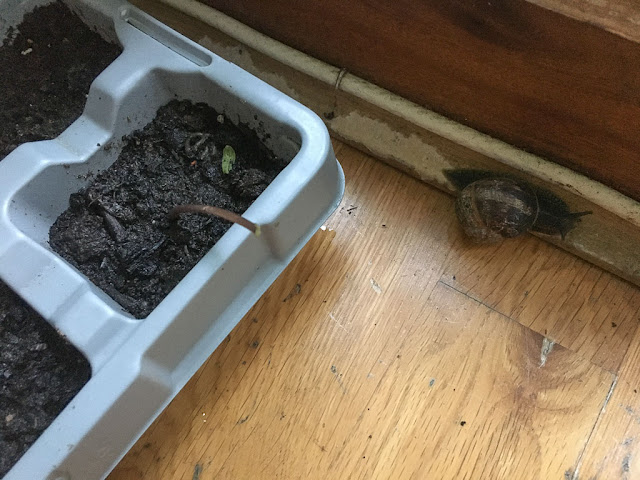 Yes, that is a snail -- inside the house -- and as you can see, it completely decapitated my seedling. Argh!

If there's any consolation in this sorry state of affairs, it's that the snail probably came inside on the seed tray, so this would have happened outside too. It was lying in wait, licking its snail chops.

The jimsonweed seeds that I planted on the same day haven't come up at all. Not yet, anyway. 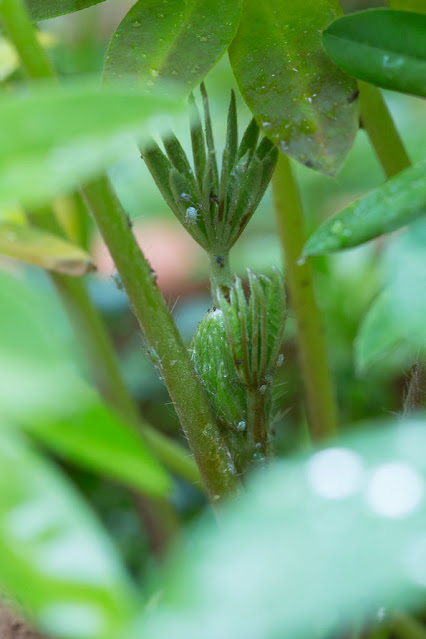 I'm also battling a case of killer aphids on our Rachel de Thame lupine. (This is a terrible picture, but you can see them on the new leaves.) The plant was starting to look a little peaked, and when I examined it more closely I realized its interior stems and new growth were positively coated with aphids. Apparently lupines are subject to a kind of super-aphid all their own, one that comes from North America and has no natural predators in England. Nothing eats them because they absorb alkaloid compounds from the plants and they get huge. (Well, huge by aphid standards.)

I killed as many of them as I could by hand, and then sprayed the plant with bug spray -- which I almost never do, but this seemed like a crisis. A day later, stray aphids were still crawling around. I'm thinking our bug spray isn't worth much. I plan to go the soap-and-water route next, but I have to go buy a sprayer bottle. I suspect squashing them by hand is going to be the only truly effective method of control. 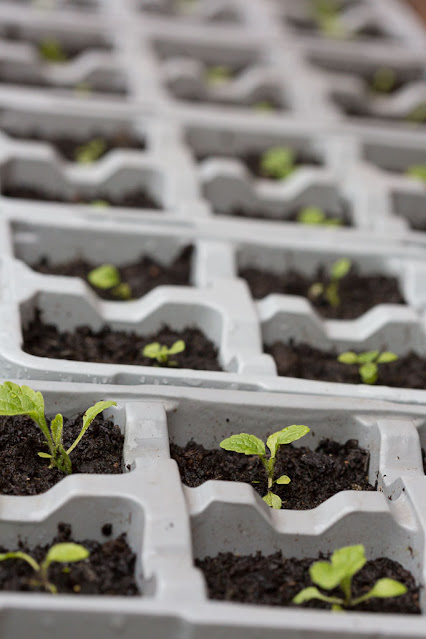 Here's a happier story -- so far, anyway. My foxglove seedlings are holding their own. I wouldn't say they're prospering in these cool temperatures, but at least they're still alive. I have two trays indoors that are a bit bigger than these, which are outside on the patio.

Finally, while talking about my blog stats yesterday, I mentioned that I'm apparently getting about a thousand views a day. I'm basing that on this graph (above), but I'm under no illusions whatsoever that this number reflects real, human eyeballs and certainly not different individuals. I know I don't have a thousand people reading this blog.

I'm sure it's mostly bots or Internet pings. I think Blogger used to offer a statistic called unique readers, or something like that, reflecting the different IP addresses of blog readers and thus more accurately estimating the number of individuals looking at the blog. If I remember right, mine was somewhere around a hundred a day, and I'm sure even some of those were automated.

If I had to guess, I'd say I get about 50 real readers a day, and that's fine by me. I appreciate each and every one of you. You're welcome to come over and help me kill aphids any time.
Posted by Steve Reed at 6:23 AM