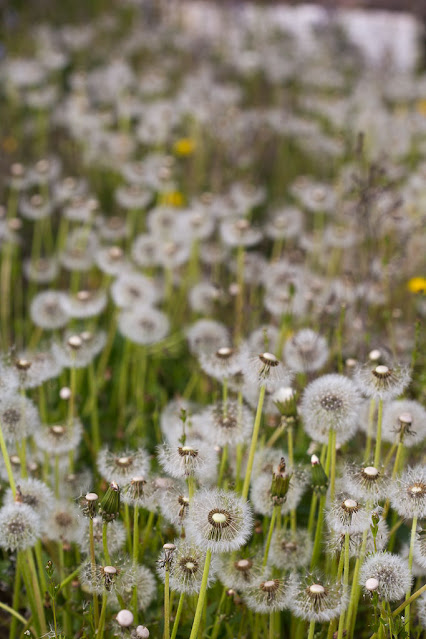 This remarkable front garden is just down the street from us on Fortune Green Road. It has been entirely colonized by dandelions, and when they're all blooming it's quite a spectacle. I'm a big believer in saving dandelions, because the bees love them, but they do run rampant if they're allowed to go to seed -- as these have been. 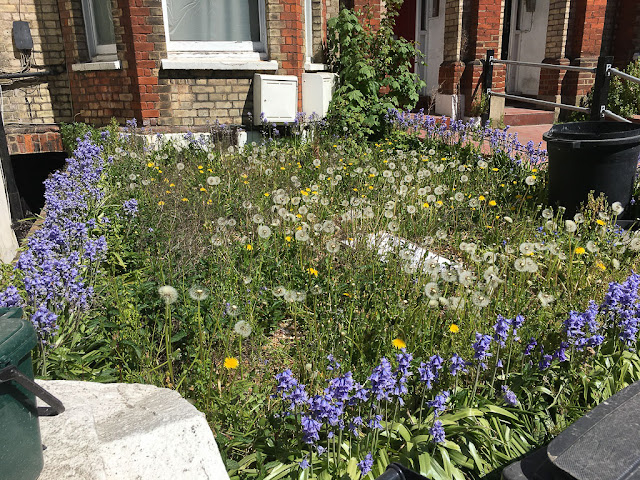 Here's an overview. It looks more unkempt than intentionally left wild, especially with that hunk of wood or whatever lying in the middle. The bluebells always wind up looking a little baked, because bluebells are shade-loving plants suited to living under trees in a wood. I think if this were my garden I'd plow it up and start over, and plant things that like direct sun.

So, there's my armchair gardening for the day.

Speaking of plowing things up, my brother sent me a depressing article from my hometown newspaper about a historic house that's going to be demolished. This place looks beautiful and wildly eccentric and artsy and also well-preserved; I think it's a crime to allow it to be torn down. It's another example of an older home in Florida being flattened so an owner can build something bigger and more modern with a lot less character. There are more pictures on the Zillow listing.

My brother is involved in historic preservation so he could explain this dynamic a lot better than I can, but basically, in Florida, where there's a strong tradition of private property rights and relatively little appreciation for local history, communities are often unable or unwilling to flex the regulatory muscle that would prevent such destruction. City leaders, starved of civic income by successions of tax-averse Republican-leaning governments, are terrified of expensive lawsuits. I hope they find a way to stop this place being demolished, but with waterfront land at an expensive premium it's probably unrealistic to expect the city to step in and secure it for any public purpose. (It would make a great museum, though, much like the admittedly much grander Ringling Mansion in Sarasota.)

I must say, this is one cool aspect of living in London; history is all around us, and there are strong regulations to ensure that neighborhoods remain architecturally and historically consistent. There are still controversies but the government denies planning applications or requests modifications all the time. (By the way, I think the proposed Hampstead house in that linked article is actually pretty interesting -- and unlike the Florida situation, it's replacing an unremarkable structure with no historic or aesthetic significance.)

Otherwise, it's life as usual around here. I'm starting to weed more of our library collection in preparation for the big move in a few weeks. But I believe in historic preservation, so I'm saving some old stuff, as long as it has character and remains useful!
Posted by Steve Reed at 6:27 AM