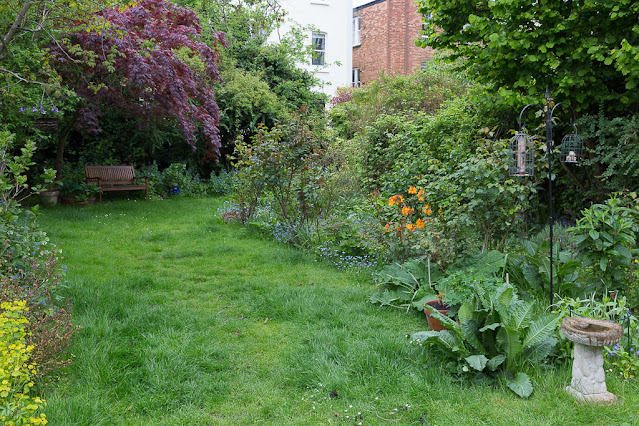 Around the beginning of the month, Dave suggested we take part in "No-Mow May," a campaign to "re-wild" our gardens by not mowing the lawn. Supposedly this lets insects hatch and bees emerge without sucking them up into a lawn mower, and allows wildflowers and other plant life to mature.

Here's the result in our garden so far -- an ocean of shaggy green. I kind of like it -- and actually there are a few wildflowers sprinkled here and there. Mainly white daisies, but also some clumps of ragwort that will eventually grow high and bloom yellow. And if we want, according to the charity Plantlife, we could proceed to "Let It Bloom June" and "Knee-High July"!

I bet Mrs. Kravitz would love that.

As I've mentioned many times before, we always let some wild things grow. You can see that the teasels by the birdbath have become quite monstrous. Dave calls them "dinosaur plants." This is their second year and they should bloom this summer; there are more behind the bird feeders. 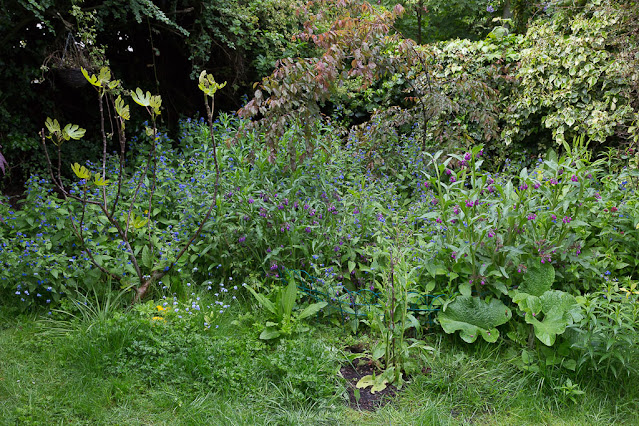 And then there's "Borageland," the far corner of the garden. It's full of green alkanet, which has bright blue flowers and is a relative of borage, as well as purple-flowered comfrey. There's also great hairy willowherb, rosebay willowherb, buddleia, pink valerian, creeping buttercup, forget-me-nots, a burdock (lower right), a small teasel in front, and our fig tree at left with some daffodils and yellow primroses beneath it. And more stuff in the background, including that pinkish Prunus tree we transplanted.

See that clump of plants in front, just left of the burdock? I put that in the ground yesterday. It's our second Chinese lantern, and it had been growing in a pot, but the pot was colonized by a few other things as well -- some great hairy willowherb, purple verbena and what I originally thought was borage but now believe is actually a foxglove. Hopefully it will all prosper there. I'm just glad the lantern is still alive. 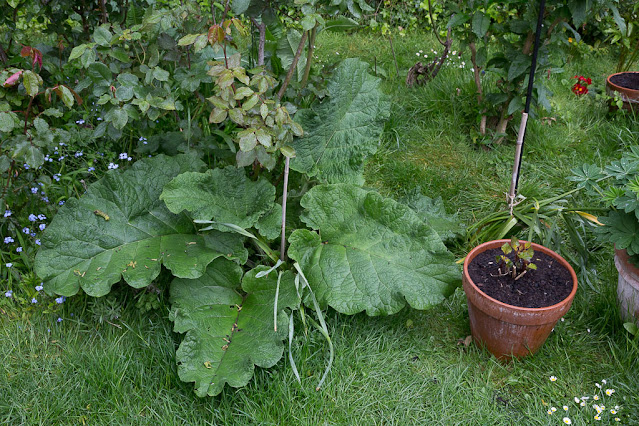 We have a couple of very large burdocks that should send up some impressive flower stalks later this summer. The sea kale that used to grow (sort of) in the garden died over the winter, but as I told Dave, the burdocks basically serve the same purpose, as big, leafy, attention-grabbing plants. And they're a heck of a lot easier to grow!
So, yeah, we like our weedy patch of ground.
Posted by Steve Reed at 6:11 AM