I Engage With the Proletariat 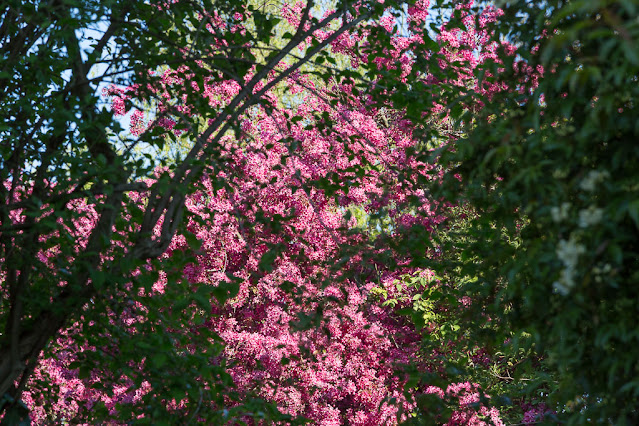 Our neighbors have a couple of really nice crabapple trees, and this is what they look like from our patio on a sunny morning -- a wall of bright, vivid pink.

Yesterday felt very strange. We had two friends over for brunch, our first social guests in more than a year. First we both took Covid tests, just in case. Then I spent the morning cleaning as Dave made a frittata and a fruit salad, and by the time Colin and Warren arrived at 11 a.m., the place was as clean as it was ever going to get. We sat out in the back garden and had mimosas (or buck's fizzes as they're known in England), and although the skies were mostly gray and the temperatures chilly, we spent a couple of hours eating out there. Olga sat with us and got some bacon.

After they left, though, the rest of the day felt off. I guess drinking at 11 a.m. will do that, although I only had three mimosas over a couple of hours -- it's not like I was schnockered. My routines felt disrupted.

Some guy came to the door on Saturday selling newspapers for the Internationalist Workers' Club. Although I live on a fairly bourgeois street I'm generally sympathetic to left-wing politics -- a "limousine liberal" without the limousine -- and plus he was kind of cute, so I bought a copy. I bravely attempted to read it, but it bills itself as a "Journal of Marxist Analysis" offering "Proletarian Opposition to European Imperialism and Unitary Imperialism," and the banner headline on the front page is: "External Constriction and Materialist Theory." Doesn't that just make your eyes roll up into your head? I suppose there's a reason Communists have a reputation for being humorless. They need to leaven those pages with a little Kim Kardashian. (I know, I know, she's not even remotely Marxist, but I Googled "Marxist sex symbols" and nothing comes up.) 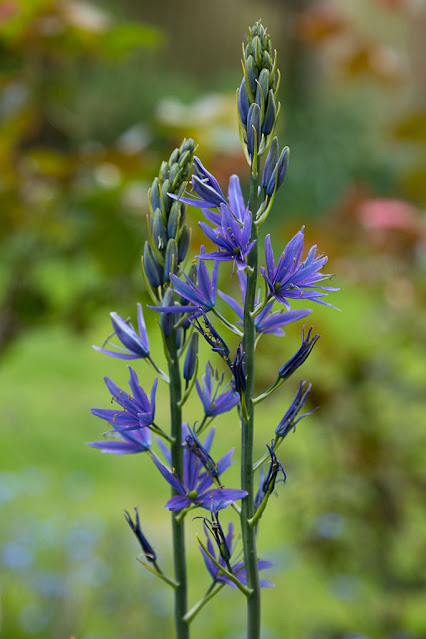 The camassias are blooming in the garden and looking pretty good despite our recent lack of rain. We're supposed to get rain today and into this week, and I hope it really happens because we could use it. The ground is as hard as a rock.

I scheduled my second Covid vaccine for June 3, which is almost exactly twelve weeks after my first one -- the standard waiting period between doses here in Britain. Dave and I were both told our GP would contact us to make an appointment, but we've heard nothing so I decided to be proactive and do it myself. I just wanted to get it on the calendar. I can always cancel if the doctor calls me in the interim. Dave also tried and the NHS's online platform wouldn't let him book, I suppose because he's in some special category of medically vulnerable people. But he should be getting a call any day because his first vaccine was several weeks before mine.

I tried to walk Olga in the afternoon, and she acted excited until we walked out the front door into the chilly, gray afternoon. She stopped on the front step and wouldn't budge. She turned right around and came back inside. 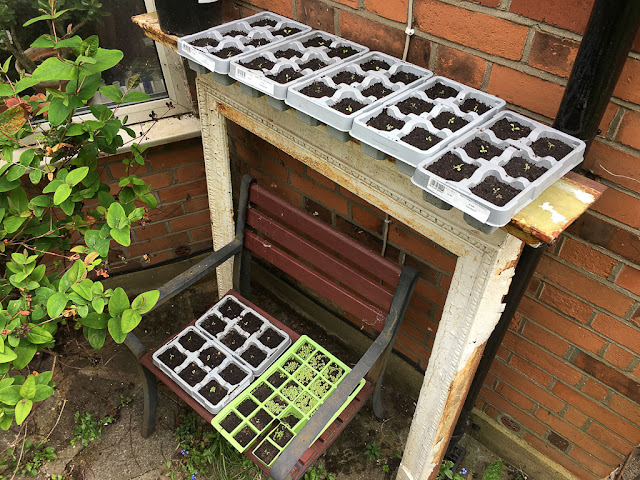 These are the foxglove seedlings I potted on Saturday -- plus two additional trays not in the picture. You can see the densely planted seedlings as they were originally grown in the green seed tray. I could grow a whole nursery's worth of plants if I pricked them all out into their own pots. Foxglove overload!
Posted by Steve Reed at 6:57 AM