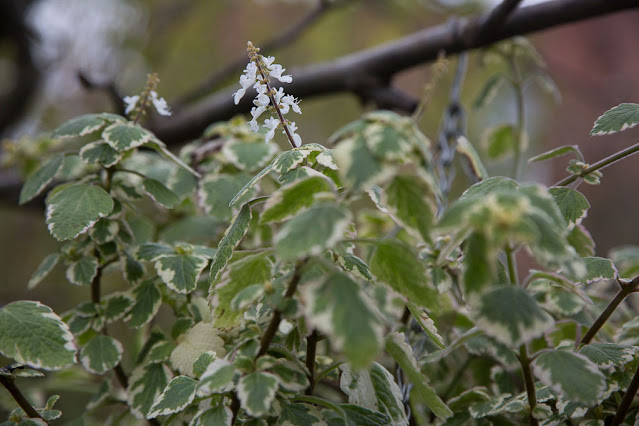 Not much news on this Thanksgiving day, since I spent yesterday mostly reading on the couch. I did get out and take some pictures in the garden, where a few hardy plants are still blooming, like the plectranthus (above) that Mrs. Kravitz discarded back in the spring. We have three hanging baskets full of them. I have no idea what we'll do with them in the winter, if anything. We may let them meet a natural end, but they've been pretty all summer. 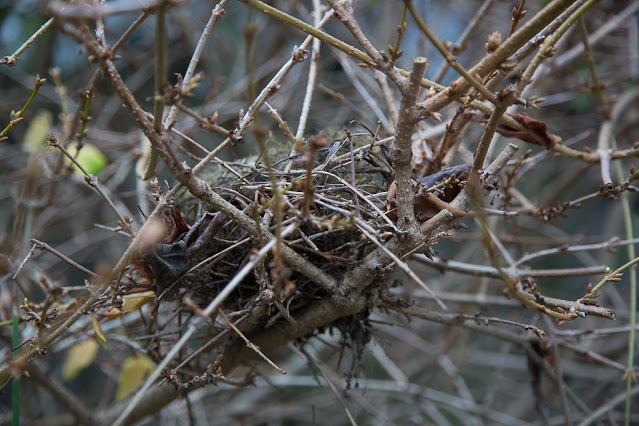 This was a bird nest inhabited in the spring by dunnocks, in our forsythia bush. It no longer has the bowl shape that dunnock nests are supposed to have -- I don't know whether a predator tore it up or it naturally fell apart after it served its purpose. We did see young dunnocks flitting around, so I think some chicks survived and fledged. 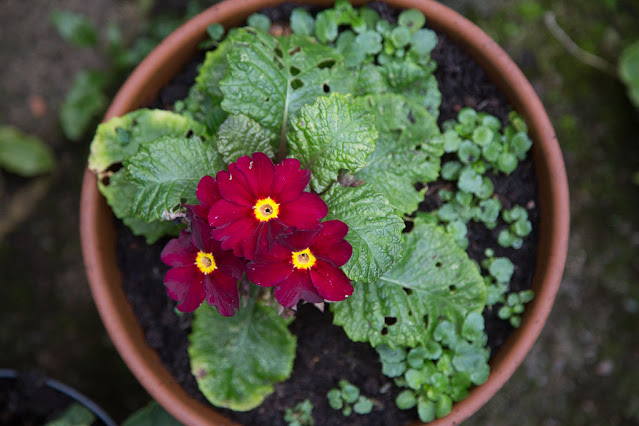 Some of our primroses are still blooming, although they're also looking a little moth-eaten. The squirrels dug up one of my favorites, a bright magenta one. I'm trying to save it but who knows. (Primroses are a dime a dozen in the spring so I can always get more!) 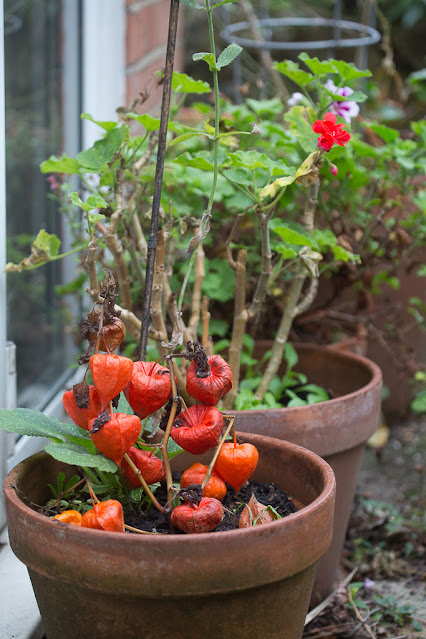 Finally, that Chinese lantern plant I bought a month ago has died back -- hopefully to regrow in the spring. There's also a borage plant and a purple verbena in this pot that sprouted from seed. Many of our pots are like this -- all kinds of stuff growing in them. I'm not a big believer in weeding, because sometimes those "weeds" do interesting things.

Dave and I watched "Hillbilly Elegy" on Netflix last night. The movie's gotten a bad rap, but I thought it was pretty good. The book, by J.D. Vance, had a sociological side, talking not just about the author's life but about the regional issues facing many of his friends and neighbors. The movie is more strictly autobiographical, but there's footage of the shuttered shops and factories in his rather desperate little town which is surely meant to convey the wider issues. I suppose the movie could be branded classist and elitist – "redneck" lifestyle porn produced by interlopers from New York and California – but it's also Vance's story, and he's credited in its production, so that seems to weaken that argument. It's well-acted, although poor Amy Adams mostly screams and cries – she must have been exhausted when the filming was over. Anyway, I didn't think it was bad.
Posted by Steve Reed at 7:42 AM

There is a coincidence, Steve. Last night, idly flicking through Netflix, in search of the perfect billing, the Hillbilly Elegy caught my attention too. But then I thought (not least on first visual impression of the characters): "Am I actually interested in these people and their predicaments?" Call me shallow but the answer was a resounding NO. Partly because I appear to have a thing about the vaguely podgy. Someone's beer belly I can just about stomach (let my father give you a hug). Well padded all round not so much. Not, I hasten to add, that I equate being fat with being stupid. I don't. Even the slender do have their limitations.

Upshot being that, on your (cautiously) endorsing the film, I will give it a go. What's a couple of hours of my ever shortening life span when it may prove an education in another nation's ways? Florida, ca 1985. Breakfast in a diner lasted me till the next morning. Pancakes and maple syrup to die for.

"The squirrels dug up one of my favourites..." Surely it's wrong to generalise about squirrels. Undoubtedly, some of them are socially and environmentally responsible. It's likely that only one maladjusted squirrel attacked that particular primrose.

The flowers that are still out there keep us going. Have you seen the ivy now, the Hedera Helix ? Beautiful shapes

I'm with you on the weeds, I tend to leave mine as they hold water in the ground and are good for the insects.
Looks like the lanterns were a success, they should come back okay next year.
Briony
x

I was about to add Hillbilly Elegy to our Netflix list, when I began to read the critiques that made me think again. Thanks for your critique. I'll give it a try.

I love the rural paradise (suburban paradise) you've created in your city garden. Incredible the variety of plants and wildlife. On my walk on the beach today after a big overnight storm, I noticed a lot of plant tubers (reeds that grow along hillsides here) and thought of you, figuring you would have taken some home and planted them!

I probably won't watch hillbilly elegy because it simply hits too close to home. I will never understand how these pockets of poverty can be such republican strong holds but they are. The people who are most disadvantaged seem to fiercely defend the very people who seek to take advantage of them.

I hope you enjoy the day and whatever it brings. Prefer the book over the movie in this instance and love what you've achieved in the garden, as always.

another show/movie that everyone is watching that I am not. not much blooming here. a few roses, the orange cosmos of course, the camellia which I discovered was infested with whitefly so I got the insecticidal soap and soaked it. going to be a quiet day here.

Happy Thanksgiving to you and Dave.

Although I come from the same gene pool, I won't watch Hillbilly Elegy. I couldn't get out of that mind set fast enough. I took off for Paris when I was 19 and have never, ever looked back. It's bad enough when I'm guilted into attending some family get together every five or ten years...but jesus, the mess these people make of their lives is so depressing, not to mention their get-rich medical malpractice lawsuits that are always pending. These people are pathetic.

I wish primroses were a dime a dozen here - they're six bucks (Canadian) each!

I think birds repair their nests constantly while they're in use, so perhaps that nest is just falling into disrepair like an empty house.

I'm sort of looking forward to "Hillbilly Elegy" though I read the book and was a little depressed by it. We'll see. We loved "The Queen's Gambit" and I thought Anya Taylor-Joy was sensational and probably deserves an Emmy for her portrayal.

Happy Thanksgiving to you and Dave.

When August woke me up early this morning I wondered if Dave was just then getting his root canal. I hope it's over by now and that he is home. Happy Thanksgiving to the both of you and to Olga, of course, from Lloyd to London.

There is a lot going on in your little garden. I'm sure Dave's trip to the dentist must be over by now so I hope the two of you and Olga have a very happy thanksgiving.

Thank you for making me smile today!

Your blog is such a nice little patch of sanity in a completely fucked up world. Thank you for that and yes, perhaps Darwinism is at work.

There has been a comedy series here about a deprived area in Sydney full of low income people who are very rough. I think it is called 'Housoes', for Housing Commission tenants. It could never pretend to be politically correct and quite cringeworthy but presented as almost a documentary, it was spot on.
I guess I know what a real hillbilly is. I think I do.

Beautiful flowers! I find the green leaves and colors uplifting this time of year. I had just read an article about that book/film by someone from that area who was highly critical. Her assertion is that he's not really from there nor did he live there for long, so his hillbilly stereotypes are a disservice to those who have spent their lives there.

We had a primrose in Ohio that we planted in our front flower bed. It came back every year - at least until the daisies completely claimed that space.