There's Art in Everything 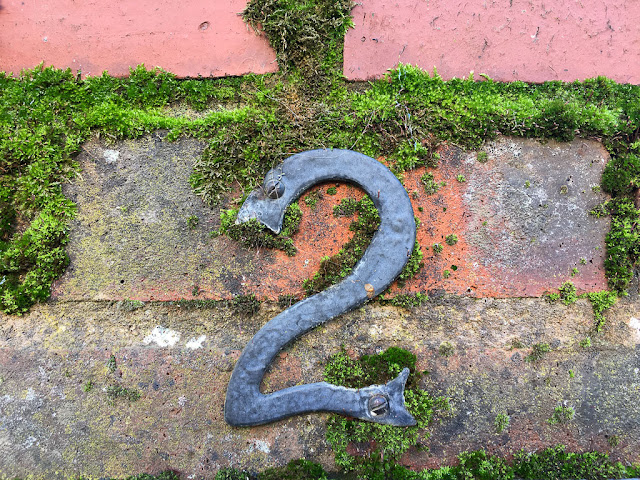 It's Wednesday and I have nothing to say that doesn't involve a school library, so....how about a mid-November edition of randomly collected iPhone photos?

First, a rather mossy house number snapped on the way to Hampstead Heath. Moss grows like crazy at this damp time of year, but it looks kind of nice, too. 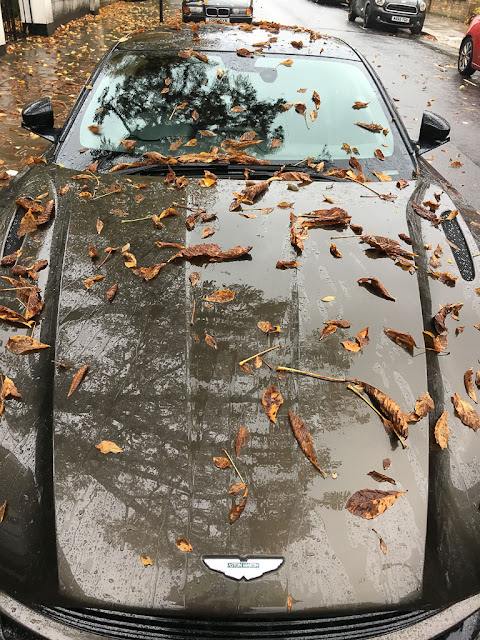 This is an Aston Martin, and as such is probably way too expensive to leave sitting out on the street collecting leaves. 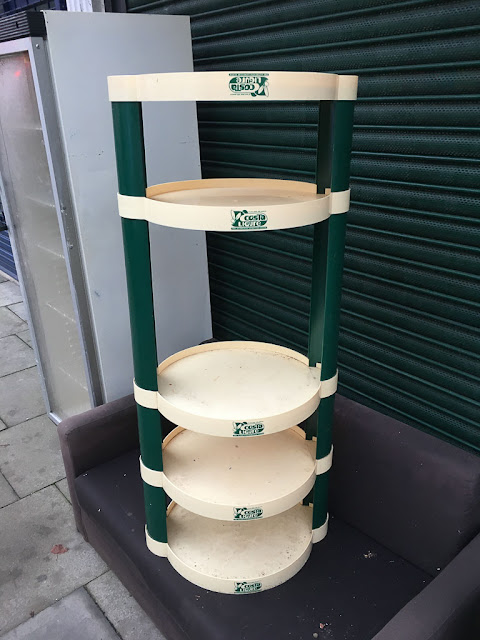 A rather bizarre shelving unit left outside our local cafe, presumably for disposal. It bears the logo of a brand of pesto... 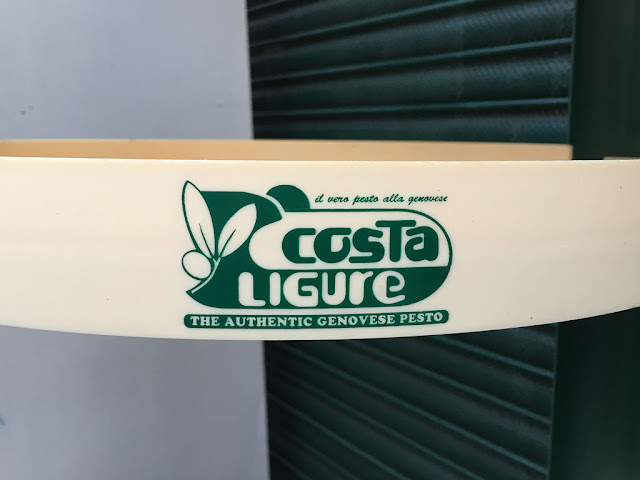 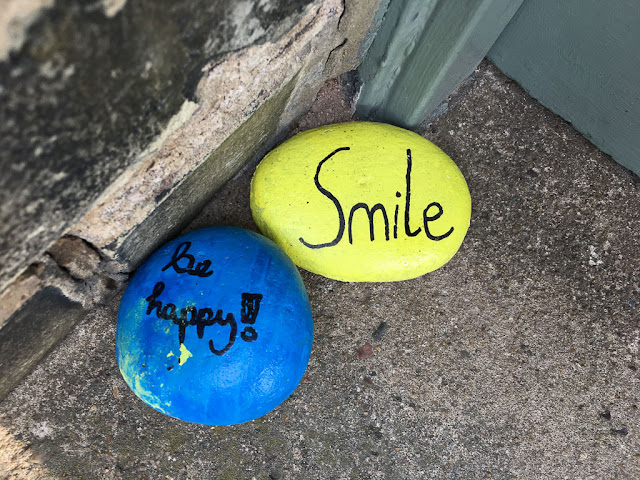 Some rocks decorating a doorway in Hampstead. If it were my doorway I'd be tripping over them, which wouldn't make me smile. 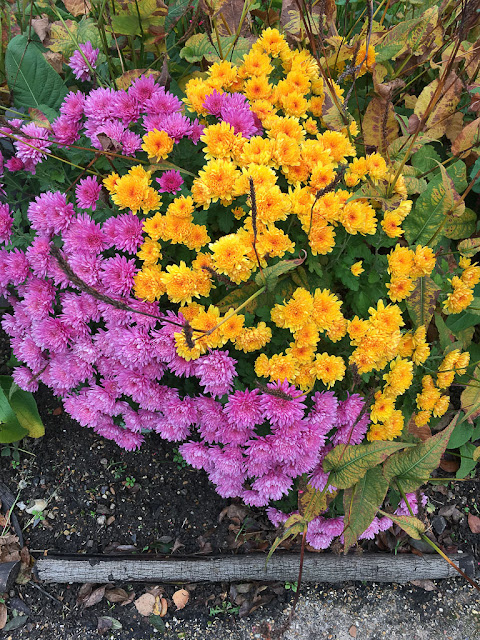 Chrysanthemums at the cemetery -- much more colorful than that sorry one we had at our front door. 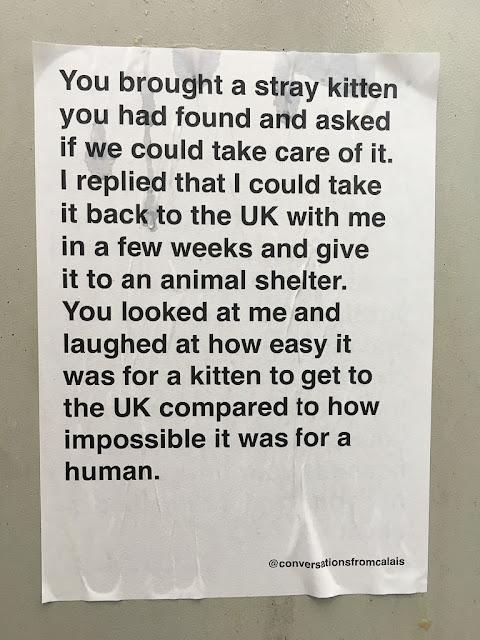 Food for thought from Calais, where there are camps of African and Middle Eastern migrants waiting to cross into the UK from Europe.  When I lived in Morocco in the early '90s, I used to hear similar thoughts from some of my Moroccan friends. My American roommate and I had a cat, and as she prepared to take it back to the States at the end of our two-year Peace Corps term, the Moroccans expressed amazement that the cat could easily travel to America but they couldn't. 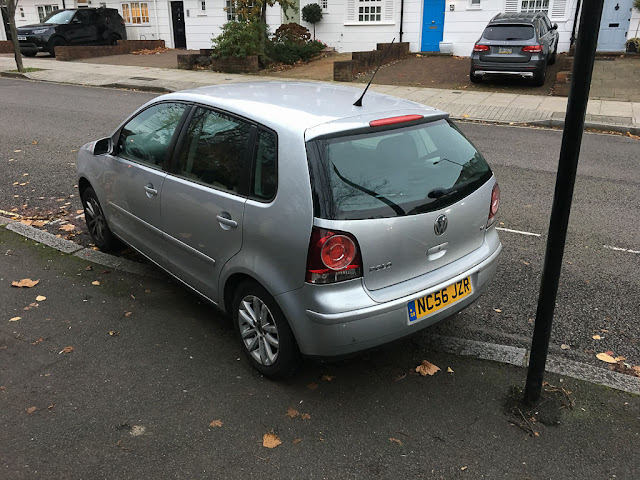 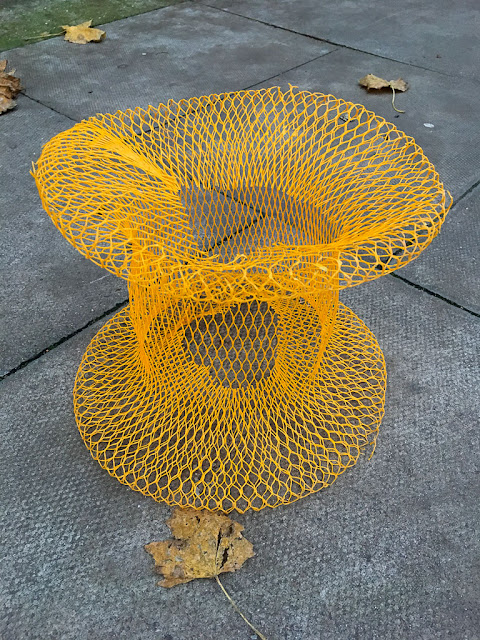 And finally, some kind of stiff plastic net packaging, standing on the sidewalk like a modern sculpture.
Posted by Steve Reed at 6:13 AM

I take your point with the kitten notice but right now getting an adult kitten into this country is a costly and expensive business.
I had a neighbour who was an expert in similar creative parking.
Alphie

You lived in Morocco in the early 90s. Wow! I'll ask no questions.
It is quite difficult to bring pets into Australia, as Mr Depp discovered when he illegally brought in Pistol and Boo and our Minister for Agriculture threatened to shoot them.
Interesting parking, to say the least.
Countries do need to control immigration. It can't be a free for all.

Facts are facts, Andrew. Johnny Depp has had about as much bad press as can be gulped down without repercussions at the nearest receptacle. I understand it was his then-wife who smuggled the dogs in. If Depp was an "accessory" by turning a blind eye I do submit, as mitigating circumstance, that it's always best to keep Amber from turning red.

"It can't be a free for all", you say. "Free" doesn't enter the equation. Hardship does. What you are saying is on par with "no room at the inn" (and don't we just all weep at the crib, once a year, come December). Well, at least there was a stable and hay.

I hope the owner of that Austin Martin is alright. I now have visions of someone with no friends, no family, not missed by anyone, struck by a stroke, eaten by unmentionables, unnoticed by their neighbours. Till the leftovers stink. On the other hand, the driver might be in custody.

No, my imagination hasn't gone into overdrive. It's just that, close to where I live, there was this car parked, in the same spot, for ages, with a prominent Warden's notice to effing remove the thing or ELSE. Pretty brutal. Did anyone open the boot? As your photography, Steve, repeatedly shows: Mysteries abound.

I love the house number with the moss. It would be an interesting photo-project to capture many different house numbers but all number 2 if you see what I mean and then to present them in a collage. Each number 2 would have its own charcter and context just like the one you spotted.

The no 2 photo gets my first prize out of this lot.
Briony
x

That final "art" is wonderful. I though Aston Martin's had built-in leaf shields (and bird crap shields). What they hell are the paying all that money for?

Another fascinating collection of photos. I love the moss and the mums. That statement about the kitten really does make you think. And, if I stubbed my toe on that Smile rock, I would not be smiling. The leaves on the car make me long for trees to start changing here.

I am wondering if you could take that netting home, plant some sort of climbing, entwining ivy or something around it and see what happened.
Or not.
A parent could make good use of that pesto shelving. Any number of things could be organized on its shelves.
And I like the two, too! We have the exact same moss growing here. I love it.

love the mossy number 2. I guess whoever owns that Aston Martin wants everyone to know it. curious shape, I wonder what that plastic mesh was protecting.

The note made me tear up. In an aside, my daughter got her spousal visa, and within 72 hours, had gotten herself a way out of Tlibisi and was enroute to the UK with her Afghan street cat, Mack, who, has his own papers designating him a British Cat. Far cry from his humble beginnings in the war torn streets of Kabul. Would that all people were as cherished as that cat.

Cats and dogs are not people , that is their beauty, welcomed. If a strange guy and a cat stood at my door, I would let the cat in and give it a bowl of tuna, the guy, not so sure. LOVE the number in the moss on brick, that is the BEST!!
England is so tiny, Probably can not support that many people. Finland has more empty space ...just sayin' England is getting tinier by the moment, Brexit made that a certainty. Scotland wants to bail , taking Balmoral with it, gosh, where will the Royals get their stags.

Why do people not get that cats are a 100% improvement over humans?

I agree with Linda Sue. Any cat is welcome into my house (and so far, about 20 street cats have taken me up on my offer) but I want to put a sign on my door that tells any and all people to GO AWAY.

Love that number 2! Makes me want to photograph numbers I see around town. I always appreciate your iPhone collections!

For the car photo, I would think someone is an incredibly poor driver.

Lovely photos as always. I am never averse to hearing about your library work. I find it rather romantic and peaceful actually, though I'm sire it doesn't feel that way to you.

Found items and scenes make the best photos. The small things that we observe. I'm a terrible parker, so I can relate to that picture. :)

Are you sure I haven't been in London? You would think I would remember parking that car... Ha!

Good thing Dave wasn't with you on your walk. He would have wanted to bring that "shelving unit" home for his kitchen!

My Rwandan daughter-in-law was sworn in as an American citizen just yesterday! It took many years and much paperwork to get her over here and finally become a citizen. We are very proud of her!

I love that mossy house number and second Mr. Pudding's suggestion to make a series of them - great idea. I'd do it myself but I never photograph peoples' homes because I have to live in this small town :D

The pictures are wonderful, as are the names of the neighborhoods and places -- I love having gotten to know London in some small way through your marvelous curating of it!

Congratulations! So exciting for all of you!

Yeah, it's really not THAT easy to import animals here either. I suppose in reality I find it hard to believe that someone would go through the trouble of vaccinating and getting travel documents for a kitten only to give it to an animal shelter. But it IS easier than importing a person, for sure.

Of course reasonable immigration controls are necessary. But keeping people indefinitely interned in a camp on the border isn't an answer. We need to be doing more to address the needs of all those people in Calais, evaluating and expediting their cases. Right now they're in a kind of no-man's-land.

I was just going to say your imagination had gone into overdrive, and then I read your second paragraph. Ha!

I am always intrigued by interesting house numbers and I have a bunch of photos of them, but not all the same digits.

The moss is very photogenic, isn't it?!

They ought to have a forcefield around them, like on "Star Trek"!

Our trees have lost almost all their leaves. We're down to bare sticks.

The netting, sadly, isn't strong or stiff enough to support a climbing plant. I can't figure out what it was wrapping -- a big spool of twine or wire or cable, maybe?

It looks like a big spool of some kind...?

I wonder if that cat realizes how fortunate it is!

I agree, I'm partial to animals over people as well. :)

England is small, but it's not THAT small. The argument that it's a tiny island is one often used by right-wingers to justify anti-immigrant measures. I don't quite buy it, personally.

I would certainly never turn away a cat, but Olga might.

House numbers are often so interesting. I've found a lot of cool ones on my walks around town!

Dave suspected that a bunch of kids picked up the car and shifted it, but I'm doubtful. I think that person just parked really badly.

I have my peaceful days, but not lately. Keeping the kids in books when they can't actually enter the library is a challenge! (And a subject for future posts, no doubt!)

Surely not THAT terrible!

I THOUGHT OF YOU when I saw that car! LOL!

On the contrary, Dave is happy that I didn't bring it home. I'm the one who's usually scavenging for useful things. :)

Ha! Yeah, there's something to be said for urban anonymity.

English place names are the best. One of my biggest joys when working on that "Bleeding London" photo project a few years ago was seeing all the street names! It's so different from the states, where we just have "Fourth Street" and "First Avenue." (Although LA has fun street names, too.)