Music in the Woods 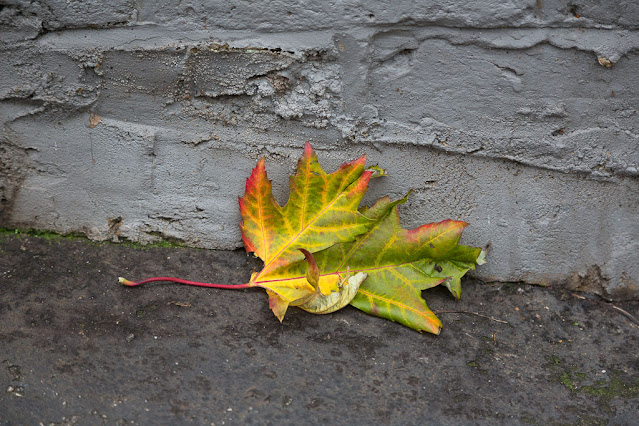 Olga and I went on a long walk yesterday through Hampstead and the Heath. The weather was gray and there were (again) tons of people out, but we had a good time. 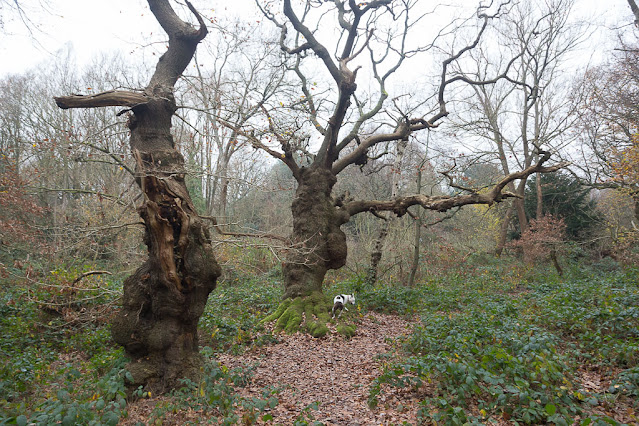 For Olga, of course, this meant chasing squirrels up trees and barking at them frantically. Here she's jumping down after doing her best to scale the trunk of that gnarled old oak. She has never absorbed the fact that she can't climb like the squirrels can.

When we first arrived on the Heath, I heard distant music. As we walked we came upon two people playing a saxophone and a trumpet. 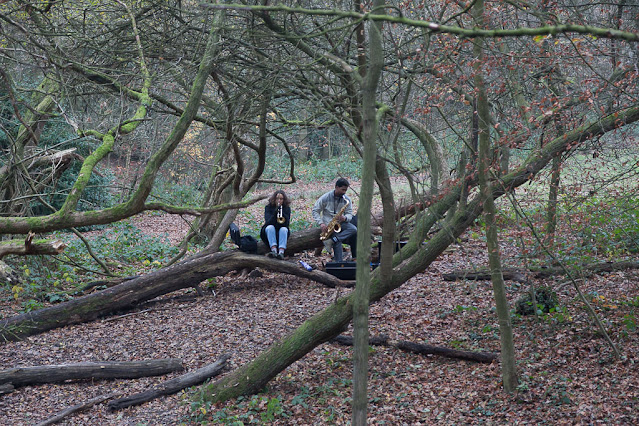 I didn't want to get too close and intrude. They were both really good. I made an audio recording too. I deliberately did it from some distance away so you could hear the music blending with the ambient sounds of the Heath, just as I heard it while walking:

Steve Reed · Music in the Woods
The sax at the beginning is very faint, but the trumpet comes in clearer. I apologize for the impatiently barking Olga. 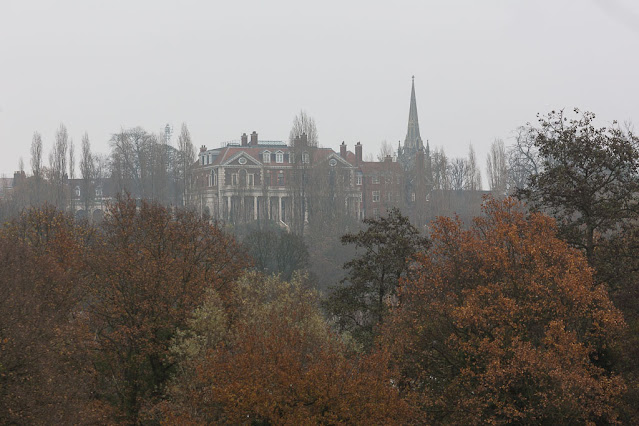 Now that the leaves have mostly fallen, we had a pretty good view of Witanhurst and, beyond it, St. Michael's Church in Highgate. Witanhurst is a huge mansion -- the largest private home in London, second only to Buckingham Palace (which I suppose isn't really private). It was built about a hundred years ago by a wealthy industrialist whose family lived there until the mid 1960's. It then passed through a string of owners including Syria's ruling Assad family before being sold to a mysterious buyer in 2008. It has since been renovated and expanded -- because why be merely huge when you could be IMMENSE -- and was the subject of a fascinating article a few years ago in The New Yorker. (The secretive buyer, it turns out, is a Russian oligarch. No surprise there.) 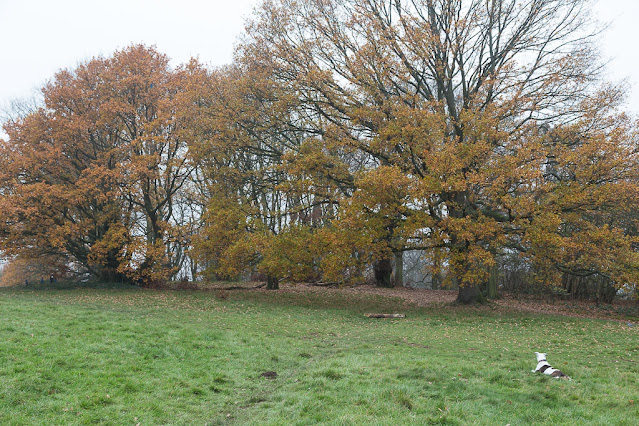 Olga eventually reached a point when she preferred to lie on the grass and watch the squirrels rather than chase them -- but she still wasn't ready to go home by the end of our walk. So we made another short loop through the woods before I finally coaxed her home.
Posted by Steve Reed at 6:27 AM

That is a very mournful tune! Fitting for the times we are in and the weather yesterday. We had a late afternoon walk with one of our sons on the local common / golf course in the gloomy mist and it was surprising how many others were doing the same. Much busier that it ever was before covid!

Mournful and fitting for both place and season. Olga loves to walk almost as much as you do.

Thanks for the music along with sounds of the heath. I remember that New Yorker article and thinking how obscene a display of wealth that was.

Oh my goodness, that little sound track is just beautiful, haunting. I would have loved to stop and listen to that especially in the gorgeous setting. I wonder if they can't play in their house or flat?
Briony
x

I am sure that many classical concerts, national anthems and indeed jazz gigs would be much improved with the addition of a barking dog.

I cannot understand why your country has allowed foreign wealth to drive up property prices to absurd levels. Whose idea was it to allow rich foreign people, ok Russians and Arabs if you like, to own London property...….or football teams for that matter. And we all know the dodgy means by which many foreigners become wealthy. Foreign investment is good. Foreign ownership, not good.

It was mournful, but also beautiful, and as you said it fit the atmosphere perfectly! The Heath has also been much busier than usual the past few weekends. I guess no one has anything else to do, and everybody's trying to get exercise before the truly cold weather sets in.

The music did fit the time and place! Yeah, Olga loves her walks. We go together well in that respect!

It's a fascinating article, isn't it? I remember when it was first published, and I read the whole thing again last night.

That's a good point -- they probably can't play at home, and maybe whatever practice rooms they would normally use are closed now.

Dogs improve everything! Maybe we should take Olga to Royal Albert Hall the next time we visit. (Whenever that may be.)

Isn't it the same in Australia? I know it was a common criticism in New York City when I lived there. We have entire buildings of luxury condos that are barely occupied because the apartments are owned by people who just "park" their money there, and have no intention of living in the space. It's insane, I agree, but it's a symptom of a larger problem -- the massive concentration of wealth in the hands of a very few people.

Music is good outdoors, it adds a special something.
Those gnarly trees are fantastic shapes!

What A Delightful Post - Listening To Olga Girl Bark, I Mean, Listening To Music In The Park As I Type - Dig The Photos Of Her - Such A Good Dog - And In Need Of A Biscuit For Sure - Be Well Bother Man

The music is lovely and I think Olga adds to it.
Cheers

What a pleasant surprise t be strolling in the woods and come upon musicians. Kind if magical. And even Olga added her bit.
I am fascinated with architecture so I will be looking into Witanhurst. Thanks for that tip!

Perfect ethereal music for the time and place. Was that one of the musicians laughing at the end?
When I watch shows like The Crown I am constantly amazed at how huge the rooms are and how little space the humans in them take up. I just can't imagine how lonely that must feel at times. And the endless hallways and the stairs! I look at the books and vases and tables and mantels and think about the person-power required to keep all those things dust-free and I shudder. Such follies. Imagine never cleaning a bathroom in your life and yet, never using a bathroom that wasn't spotless and shining. Well, okay. That part sounds good.

The music is so beautiful. What a wonderful sound to add to the natural beauty there. Thank you for recording that. It was nice to hear Olga too.

Music coming through the trees has a mysterious feel to it but I take it Olga was not impressed. That mansion is amazing. I don't think I've seen it or heard of it before. I'll check out your links later today.

Olga's the boss when she decides what to do about going home!

I do not understand why anyone wants to live in such enormous houses. how many people do you suppose live there? how many room actually get used on a daily basis.

one thing about having a little dog, she tires quickly. no hours long walks here but then as I've mention I know, no place to really take that hour long walk.

Lovely! The hike and the music and the sweet, scampering dog! Thanks, Steve.

Love all the photos from your walk! I'm sneaking on here at work so I can't listen to the video. I'll try to remember to come back to it!

That view of Witanhurst through the mist is wonderful. And the music in the woods is wistful and nice. Thanks! And Olga, don't be such a pain.

Beautiful! What lovely atmosphere for a walk. I remember driving to school and seeing a junior high age boy playing his violin at his bus stop. I wish I could have gotten a photo. That mansion is quite something!

Interesting, Steve, considering you are American, that you let Andrew's reference to "YOUR country" go under the radar. When I get calls from the motherland asking me "what the hell are YOU doing", say, re Brexit, I employ restraint and calmly reply: "This is not MY country, I only live here". Fine difference.

Witanhurst and extensions? You do know, of course, that space is the ultimate luxury. Why do you think countries used to go to war just to expand their borders?

Your post brought back a memory. I moved house - from a large one to a smaller one. Unfortunately, unlike me, I hadn't thought through the logistics. Thus I found myself with a shitload of wardrobes, book shelves, you name it, all outside on the terrace/patio because there was no room in the inn left to accommodate them. Choker block. First thing the next morning I called a charity. Take it all away, I told them. Make you sure you'll be here before it starts raining. One of the bizarre moments of my life. That music you caught on your walk would have made a marvellous soundtrack. Not that I cried. It is what it is, as the Angel some years later pointed out to me.

Hope those squirrels Olga chases in vain don't have a heart condition. Not that a bit of fight or flight, a shot of adrenaline aren't good for the pump.

I love discovering unexpected things like music on a walk. PS. Those gnarled trees are magnificent.

Leaf against grey stone, SO PRETTY!! I am glad that the rich guy saved the palace/house , Takes a lot of dough to keep some things alive. I am sure it is ridiculous inside.
So good to see the phots of Dave with the girl in previous post. Such a sweet photo of paw in hand.

Ursula legitimately pulled me up on what I said, and I did give it a whole two second's thought as I wrote that. I'm sure it is a very personal matter as to what you feel you country is, although as an American in England, you seem very well adjusted to the country where you choose to live.

To your question yes, it is an issue here but I don't think to the extremes that it is in London. There are many mid priced empty apartments here owned by foreigners, mostly Chinese mainlanders held as an investment but even before COVID, they were dropping in value. Now Melbourne is full of empty mid priced apartments. The only way the figures are known is by individual apartment water consumption.

Of course you are correct about the concentration of wealth in the hands of so few. Quite funny really when I remember Russia as being a communist country.