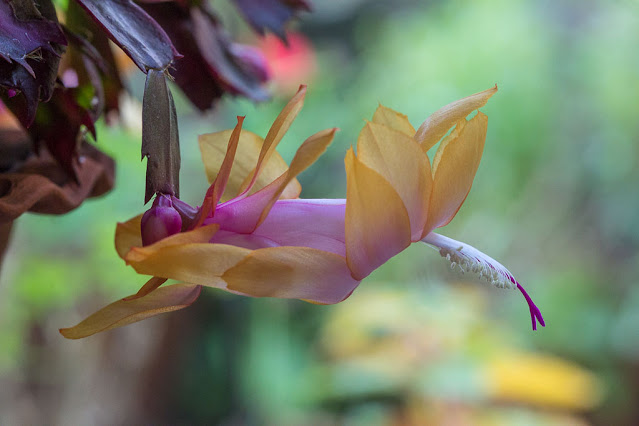 Our Thanksgiving cacti are blooming more fully now. I love the flowers. They remind me of flying Chinese dragons. 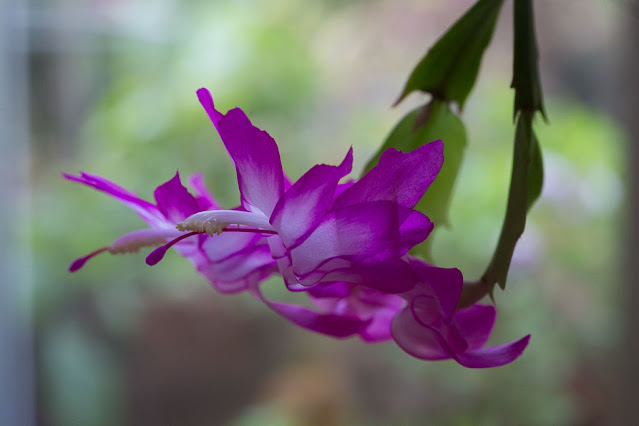 Dave and I watched a documentary last night called "Bully. Coward. Victim. The Story of Roy Cohn." The title pretty much says it all. Anyone who's familiar with the amoral lawyer Cohn and his killer instincts won't be surprised to know that he was attorney and mentor to Donald Trump -- and indeed, sometimes when Cohn speaks, with his win-at-all-costs mentality, it's like listening to Trump himself.

My jubilation at the election results has settled into a kind of sick-to-my-stomach dread about Trump's delays and legal challenges, and the support he's receiving from other Republicans. As I said yesterday, I think I understand why they're doing it, and I don't for a second think Trump has a legal leg to stand on. But he's already created a climate in which many Americans will forever doubt the outcome of this election.

As 30 former Republican lawmakers wrote in an open letter to Trump, urging him to concede: "We believe the statements by President Trump alleging fraud in the election are efforts to undermine the legitimacy of the election and are unacceptable. Every vote should be counted and the final outcome accepted by the participants because public confidence in the outcome of our elections is a bedrock of our democracy."

Trump and Giuliani are playing with fire. I fear for the stability of the country. What happens when half the populace doesn't have confidence in the election results?

In Asian culture, dragons are "a symbol of power, strength, and good luck for people who are worthy of it." Trump is unworthy, but the rest of us may need the power of the dragons to get through the next few months.
Posted by Steve Reed at 6:19 AM

I wonder why the thirty Republicans used the indefinite article in their letter - "a bedrock of our democracy". Surely they should have used the definite article - "THE bedrock". Casting these aspersions, Trump proves his characteristic malevolence. He's like ****ing Satan!

Giuliani's performances have been extraordinary. Any respect I had for him, which admittedly wasn't much, has gone.
I remember the name Roy Cohn, but not about himself. I think I filed him away in my mind as 'not good'.

I've been concerned that things would be bad following the vote, so have felt no jubilation yet. Waiting and hoping for Biden's swearing in.

You’ve nailed it: “a-sick-to-my-stomach dread”. Sums up my emotions perfectly. How many monkey wrenches will he throw into America’s machinery on his way out of the door?

I'm sharing your dread. McConnell, Barr and the rest of the sycophantic Republican minions continue to show their sick disregard for democracy. They care not what damage they do to the country.

Those flowers are beautiful and so delicate. I'm feeling the same dread. It seems like around half of the country has no idea the damage they are doing to the country they profess to love so much. I would love it if Barr could never get a job at any law firm or organization after this.

Very, very well written post. An opinion piece of the high order. And yes, we do need the power of dragons.

Really beautiful flowers. I love them and the analogy. Yes, my Saturday joy of Biden's win has descended into a dread of having to deal with the next month or two of ongoing and endless BS. I'm going to try and call on my inner dragons.

I love the exotic looking flowers like this. they remind me of the shrimp plant flowers which are also blooming now.

I'm afraid we will have to rely on the integrity of the judicial system and we all know McConnell has been packing the courts with right wingers for four years but hopefully they will have the integrity to judge the lawsuits on the evidence or rather the lack of evidence. they're trying to get the military votes thrown out in Arizona, the ones with address in Arizona who are temporarily deployed elsewhere during the election even though Arizona election laws allow them.

Yep - my feelings exactly. I'll rest a little easier after the election is certified, but even then if chaos can be created, Trump will create it.

I am seeking the power of the dragon- the sleeping dragon, saving energy for what is to come before January.
Love the blossoms, so elegant , graceful.
Here is an article that was in the NY times this morning, about our pooches.

Olga still seems like a young lady to me but really she is a sprightly old lady, very young old lady.

Yup, back in to the land of existential dread. Lindsay Graham is on TV today saying that if vote by mail isn't forbidden, Republicans will never elect another president. How about if everybody votes by mail? I also find it amazing that they want to invalidate Pennsylvania ballots for the presidential race, but all of the down ballot votes are just fine.

and your cactus pictures are just sublime.

What did I tell you the other day when blue skies were still yours? After I pressed "publish" I could have kicked myself. Reality sets in without my midwifery.

Keywords I have picked up, and I love them for their savoury flavour alone:

"Wrecking ball: the damage Trump could do while still president until January
The next 11 weeks could be the most dangerous in US history, some analysts believe, with a vengeful and fearful lame duck incumbent."

Let's all hold our nerve in the face of adversity. What I keep reminding myself is that Trump too will have some sense of self preservation, the will to live, survival instinct kicking in latest when he realizes he might never play Golf again. Come to think of it, the latter a bit of a sticking point since some sources claim he might be tried on various charges once the protection his current office offers evaporates come 20 Jan 2021.

Your dragon flowers are lovely And yes, in Chinese mythology dragons are bearers of good luck. However, where does the dragon SLAYER fit in? You know the one: A bit like Robin Hood, the defender of the poor and women, laying in wait in the woods. The dragon slayer of fairy tales, too hell bent on saving, if nothing else, the damsel in distress. And/or find treasure. I note that the USA is thought of as die USA (female gender). As opposed to, say, DER Irak (male). Makes you think. Not sure about what.

Remember one of my many mottos (it saves on worrying unnecessarily): "We'll cross that bridge when we come to it". Which assumes there is a bridge to cross. If all else fails, swim.

I just knew after Biden/Harris had won that all this bullshit would be over with. It's just getting started. They know that no good ass Trump had said (months before the election) that if he lose he was going to send it to the supreme court. That's why he rushed this lady in. I hate those bastards. Yep, I heard Lindsay Graham say that if they don't stop the mail in ballots that a Republican will never be in office. They were quiet until now and they are coming out with off the wall bullshit. Trump need to be sent to hell and brimstones shoved up his ass. His dumb ass kids are urging him on telling him to keep fighting. All of them need to be thrown in a hole and flamed with gasoline. It's sad that we as taxpayers are paying these no good folks to destroy us. Something has to be done.

Biden/Harris will prevail. Trump and his group will be gone. No other option.

Te election aftermath isn't going to be pretty. some strong leaders will be needed for many years to clear up thus mess.

I am just weary of this. We need to shut off his mike. Deprived of their mouth he rest of them will just starve to death.

I am just weary of all the wrangling. We just need to take our cue from the debates...cut his mike. I am sick to death of his voice.

I agree -- that sickening feeling of dread.

Yes....dread. Glad I’m not the only one feeling it.
Xoxo
Barbara