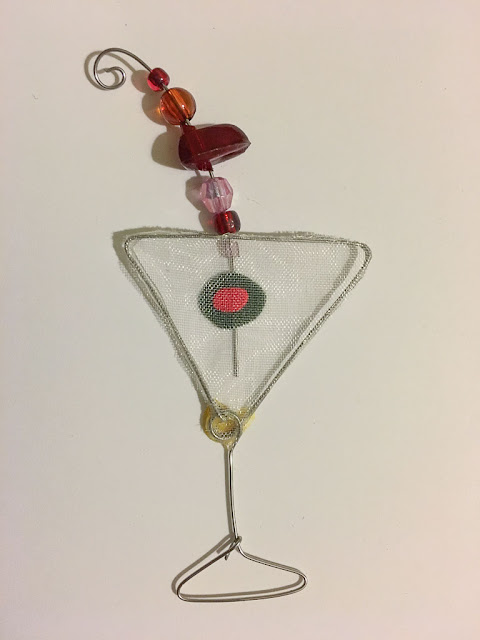 It's a special day, everybody -- the day I turn 54. I have moved from my late early 50's to my early mid-50's.
The image above is a photo of a birthday card sent to me by my friend Liz, and funnily enough, that is EXACTLY my plan for the evening. I love martinis and I don't have them often, because they pack quite a punch, but I fully expect to have one tonight! I even asked Dave to buy olives to make it complete.

Liz also sent me a fun t-shirt and some socks, and Dave's parents sent me a gift, and Dave has a few unadorned Amazon packages lying in the front hallway that I'm pretty sure are mine. Woo hoo! 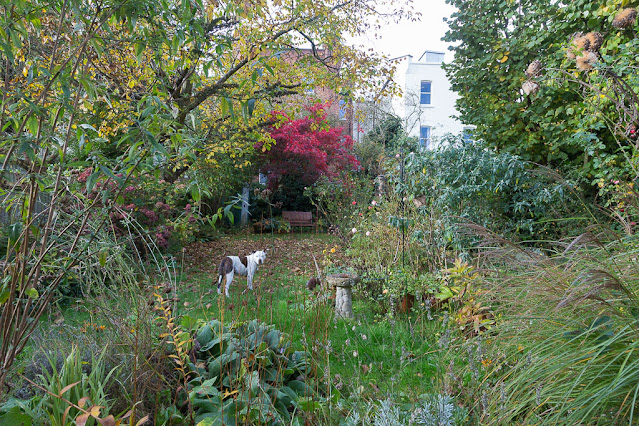 My blog commenters taught me something yesterday. I had no idea there's such a thing as a Thanksgiving cactus. In fact, when the first commenter (VRP) mentioned it, I thought she or he was joking. But then Sue confirmed it, and it really does exist -- and maybe that's what ours are. I thought they were simply Christmas cacti blooming early!

Above is a new shot of our garden, with its ever-changing autumn hues. The Japanese maple is turning its typical crimson color, which we always enjoy. I suppose I should rake the lawn. 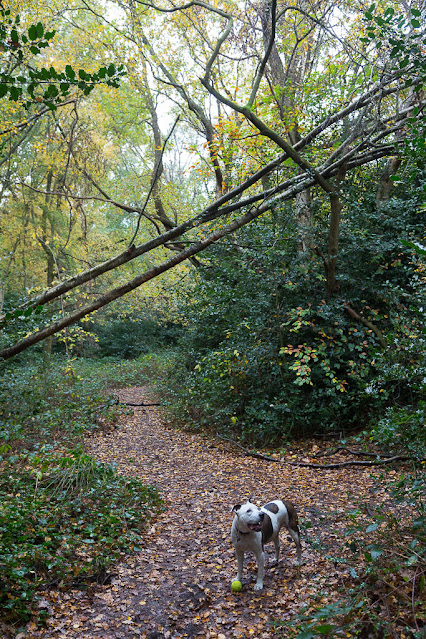 We've had some blustery days here, with lots of wind and rain. It was dry enough yesterday to take Olga for a long walk on the Heath. Manic squirrel-chasing ensued.

I finished both my books, the million-page "Troubled Blood" by Robert Galbraith and "Strawberry Girl," my latest Newbery read. (Which I really enjoyed, given its Central Florida setting -- my home turf!) I also went to our local book shop to order some books I read about in The New Yorker several months ago, but it turns out only one of them is available from their suppliers. I try to support the small local shop, but it looks like I'll have to resort to Amazon for the other two.
And now, on to the election. Let's hope I get what I really want for my birthday -- a new president!
Posted by Steve Reed at 6:53 AM

Happy, happy birthday to you! I hope you get your birthday wish!

Happy Birthday and I hope your wish comes true!

That is an amazing Martini. May your real one taste as good as the above looks.

I see even November has redeeming features. Like your birthday. And that of an amazing and formidable woman I had the privilege to work for, and count as a friend. Yes, Maggie. No, not Thatcher. "My" Maggie was born the same day as Prince Charles. 14 Nov 1948.

Dear Spring Chicken, 54? You ain't seen nothing yet. Give it a few more years, trepidation will be yours. If I were still the little girl I once was I'd recite you, loosely translated and it doesn't rhyme in English:

A handful of flowers,
Two eyes full of light,
a heart full of love,
that's all I can give.

A very happy birthday to you. I didn't realise you were so young. You are wise beyond your years ��
It sounds like you have lots of packages to open and I've heard you quite like packages, big or small.

Happy Birthday, Steve! Along with Mitch (and a good chunk of the sane world), I sincerely hope you get your birthday wish.

Happy birthday Steve and thanks for figuring in my daily life. I love your blog. It is an island of sanity, careful observation and good expression. Enjoy your martini - "stirred not shaken".

Happy Birthday Steve! You deserve all good things on your special day!

Happy Birthday Steve. Regarding the Christmas/Thanksgiving Cactus - I recently learned you can tell them apart by the leaves (or segments?). One has pointy or more jagged leaves ..... but I can never remember which one. I'm sure you can look it up. :)

Most of the thinking world is wishing the same thing, even if it is not their birthday. I can't even bear to think about it. I've been feeling very confident that sanity would take the day, then I watched 60 Minutes last night. Happy birthday, and may all your wishes come true.

Congrats On Another Trip Around The Sun - Well Done

Happy Birthday Steve! I hope your birthday present is a new president as well, the whole world does.

Happy birthday, Steve! I hope your martini is icy, your gifts all exactly what you want, and that we all get a brand new president (albeit one a little long in the tooth) tomorrow. Sending big love across the pond.

happy birthday. the garden is looking pretty wild and wooly. but I like the natural less manicured look.

Have a good birthday!

I am hoping your birthday wish comes true! It's past my birthday but I'm wishing for exactly the same thing. I just heard on the news that David Schwimmer turns 54 today so he shares your birthday with you.
Have a very Happy Birthday!

And wishing you a new Senate to go with your martini.

Have a very happy birthday. I sincerely hope your wishes come true. Thank you for being a great blogger and bringing so much pleasure to your readers.

As they say Have a Good Day! Love that card.
I wonder what would happen if you left the leaves? Possibly it would depend upon your earthworm population

Happy happy birthday to you, Steve. Enjoy that martini, and I so hope you get your birthday wish!

Happy birthday. Have a great day and martini.

Enjoy that Martini and have a great birthday. Hugs, Edna B.

Happy Birthday, Steve! Best wishes for many, many years of good health, lots of fun, and many exciting adventures! May your birthday wish come true!

That martini sounds like a great idea. I wish you a very happy birthday. And now for my present: For the first time this year Nate Silver of 538.com in his final forecast before the election said Biden is CLEARLY favored to win. May we all celebrate with martinis tomorrow.

May your wish come through, happy birthday Steve.

Happy happy birthday!! I always think that you're a lot younger than I am, but I'm only a year an a half older than you. You seem very youthful to me young man. Ha!

Love the martini! And yes, your wish is my constant prayer as well!

I hope that all of your birthday wishes come true, especially the Orange one. Happy Birthday !

Hope you have a very happy birthday, full of good things! (a new president would certainly be a nice gift) Martinis are not my thing, but books are. Reading has been great therapy during these pandemic times.

Thanks for the birthday wishes, everyone! It means a lot to me to hear from all of you. :)

Happiest of birthdays Steve! May all your wishes come true. Thanksgiving cactus was a new one to me as well. Enjoy your martini!
Xoxo
Barbara