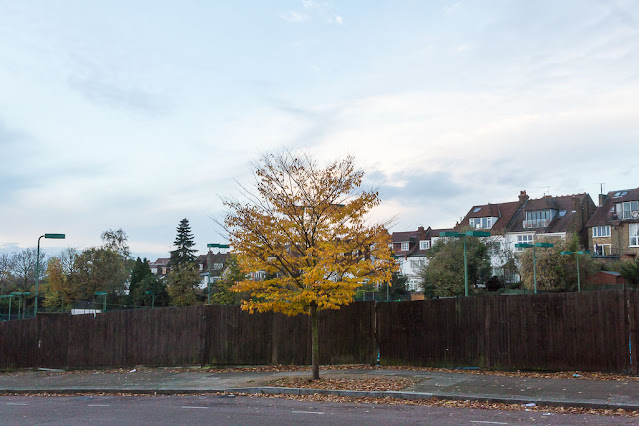 The weekend, at last! This has been a busy week. Those kids kept me running with their book requests. We've set up our library system so the Middle School students don't need to come into the library for books -- instead they make requests via the computer catalog, and I check the books out and bring them to the students in class. The idea is to keep them out of the library, and minimize student mixing during the pandemic.
Sometimes I get bizarre requests. The other day, a fifth grader asked for a gigantic research book about the Cold War. I took it to him but suggested that it might be harder than he wanted, and found one more attuned to his age group. He took that instead, but returned it a few days later -- I have no idea why he was interested in the Cold War or if he had any idea what it was. Maybe he thought it involved machine guns in the Arctic.

Kids also sometimes ask for books in Spanish. Unless they're in a foreign language class, this is usually a mistake -- it's not immediately clear in the catalog when a book is in Spanish if it has an English title. (Example: Raina Telgemeier's graphic novel "Drama.") So I have to contact the kid and say, "Did you really want that book in Spanish?" (Or French, or whatever.) Ninety-nine percent of the time the answer is no.

Same problem with DVDs. Sometimes they ask for something on DVD and they really want the book. I have to do a certain amount of second-guessing. The other day a kid asked for "Harry Potter and the Goblet of Fire" on DVD, but I figured he really wanted the book, so that's what I brought him. Later that day, it was in the return bin. So then I figured, well, maybe he really did want the movie -- so I brought him that. And still later that day it was also in the return bin! Sheesh.

(I often don't interact with the kids when I deliver their materials -- I just leave them on a table in the classroom -- so I couldn't ask him what he wanted.) 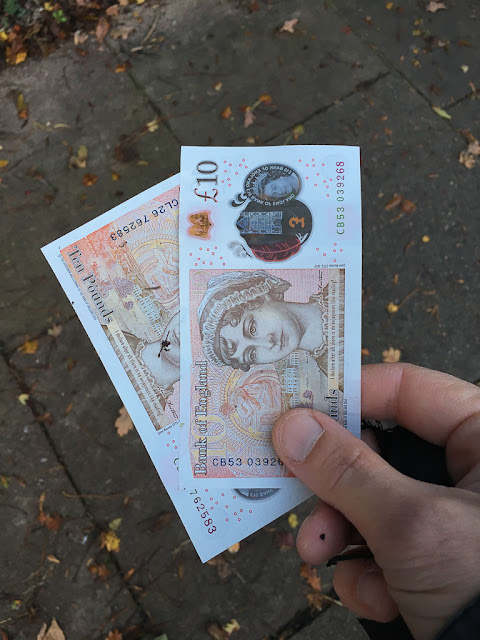 Yesterday morning, while walking the dog, I found £20 in the street! BONUS! These new bank notes are made of plastic, and they're a bit slippery and don't always stay folded. I think they're easier to drop, and I wonder if that's what happened in this case. Anyway, it's not an insignificant amount of money -- about $26.

That's Jane Austen on the note, by the way. These notes were introduced in 2017 and replaced the paper ones, which had Charles Darwin on them. 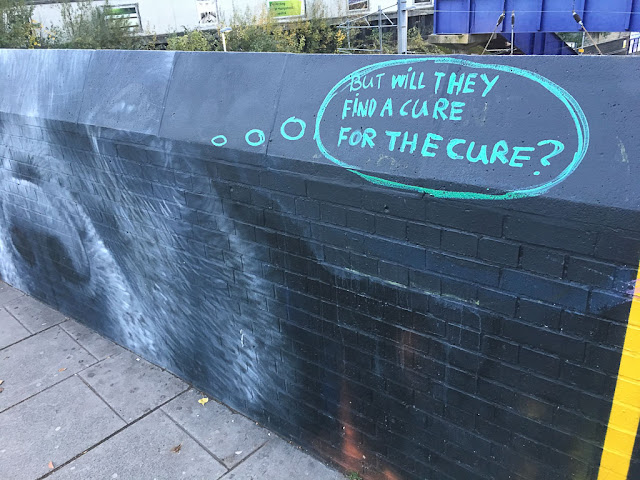 Our local thought-bubble graffiti writer is at it again.
Posted by Steve Reed at 7:13 AM

Those squidgy new bank notes are impractical beyond belief. When they first arrived in my wallet they kept escaping like slippery freshly caught fish out of the bucket. As long as my escapees make a person in "need" happy I don't mind. Are people who shop in M&S and Waitrose in need? In need of what? Still, I myself found four squidy tenners hot off the press, huddled together, on my way home, in the semi dark, some alley. Swings and roundabouts in the lottery of luck. I sincerely hope not but fear that those fourty quid may have been a youngster's pocket money to last him/her till the end of the month. And before anyone tells me to use a debit card: I like touch. I like the feel, the idea of cash. So anything under ten/twenty pounds will be paid in notes and coins. And, added bonus, you can then check your change, put it into your coat's pocket (hole ALERT!) and, down the High Street, have the wherewithal to give a pound coin or two to some home and hapless person (never do measly two p brass into a hat - it's cheap and humiliating - for both you and the person in need. Not that you, Steve, would.)

As to the "cure": Let's hope the remedy won't be worse than the disease.

Why wouldn't a kid be interested in The Cold War? It's not that long ago. At age ten I learnt about Hammurabi of Babylon (a most delicious name rolling of one's tongue) and that was way before Jesus Christ was a twinkle in God's eye. As to dates, and then I shut up, my favourite is ten sixty six. 1066, William the Conqueror.

Wishing you, Dave and sweet Olga a relaxing weekend. A friend of mine currently goes around, dishing out "Stay safe, stay negative". There is more to that quote than on first hearing.

When I was working in Oxfam bookshop before Covid I had to count the takings....those plastic notes are awful ! They don't flatten out if they have been at all bent, so no chance of getting them in a nice pile to count! So pleased that I no longer work in a a bank!!
Nasty rainy day in prospect...hope you manage to stay dry. Wet Alexi walk coming up soon!

Jane Austen should not appear on the ten pound note. It should have been the Bronte sisters - Anne, Charlotte and Emily who just happened to be Yorkshire women. Their writing was far more vibrant and outward looking and less inwardly domestic. The word I would use to summarise Austen's writing is "prissy".

I didn't realise the problems with those new bank notes. However, SG would run an ad in the local paper: "Found: Two new edition 10-pound bank notes. If they're yours, call..."

Jane Austen "prissy"? Nah. You don't know your Austen. As sharp as a tack.

Bronte sisters, Yorkshire women? There is bias for you. Still, to soften the blow, you may be happy to hear that only this morning I read that in an exclusive poll (Waitrose) the still meat eating populace "has fully embraced the Yorkshire Pudding with 55.8 % saying they would crown every roast, whatever meat is on the plate". Emphasis (mine) on "whatever". Embrace Yorkshire Pudding? Don't say you ain't popular.

A Dog Walk That Pays Out - Sweet - Hey Brother, Have A Wonderful Weekend

I never find money on my walks. Well, once I did. Not much. Less than a dollar. And those bills may be slippery but they are handsome! I always wonder why American currency is so eternally boring. Oh well. As long as it spends.
Trump keeps saying that- "The cure can't be worse than the problem." He seems unable to find the word "disease" in his mental Roladex. Meanwhile, more and more people get ill, more and more people die.

Olga has suggested the money be spent on her, since had you not been walking the dog, you'd have never found it.

my son was good at finding money that people had dropped, a dollar here, a dollar. once he found a $20 bill. he swore he found it on the ground. I wasn't sure I believed it but neither his father or I were missing any money.

Nice find of those bank notes. I was surprised that they're made of plastic. I thought at first you were going to write that they were counterfeit. The modern world is so interesting, and that includes the new way kids are getting their library requests.

Interesting what goes on in kids heads . There's much more than we think. sometimes it's hard to get at it.

Why do the British keep reissuing their money? Every time I go to London I try to use the odd 10 pound note that I saved from my last trip and no one will take it. Same thing happened last year on a stop at Heathrow when I tried to use the note with Darwin on it to buy lunch. Same thing happened back in 2016 when I was there. No one would take a note I had kept from the previous trip. I was finally able to exchange that one at a bank. I need to remember to get rid of all my currency when I travel.

You are certainly a lucky finder - The new bills melt on the dashboard of the car. They are awful, but we did not get a vote did we. Now my credit card no longer has raised numbers, it is thinner and easy to slip out of my wallet. Been replaced three times in the last five months due to OOPS, no grip!

Those are much prettier bills than our US dollars. I have several friends who are librarians (or retired ones) and they have interesting stories to tell about what students read and why.

referring to Canadian dollars not British notes. Still, do not leave them in the hot sun...

I am sure you miss the interaction with the students in the library. I used to love helping them find the book they were searching for or making recommendations that got them interested in a new author or new subject. Such fun!
I wish I would find $20 on my walks! I would love that!

I'm proud of the UK for putting Austen on a banknote---we in the US were supposed to get Harriet Tubman on the $20 bill, but a certain something happened in 2016 [I wonder what?]f that delayed that indefinitely.

As for Austen's supposed prissiness, I am with Virginia Woolf who wrote,
"Sometimes it seems as if [Austen's] creatures were born merely to give Jane Austen the supreme delight of slicing their heads off”
--Common Reader 143

Rudyard Kipling wrote a short story, "The Janeites" about soldiers who were fans (as was RK). "You take it from me," a soldier says, "there's no one to touch Jane when you're in a tight place. "
janeausten.co.uk/blogs/jane-austens-work/the-janeites-2

I had no idea your librarian work was so taxing.

You are certainly getting your exercise these days, both in running around and also in scratching your head trying to figure out those kids' requests :)

Our money has gone to plastic now also. As Linda Sue said, they melt - in the sun, in the dryer, next to a heater . . .