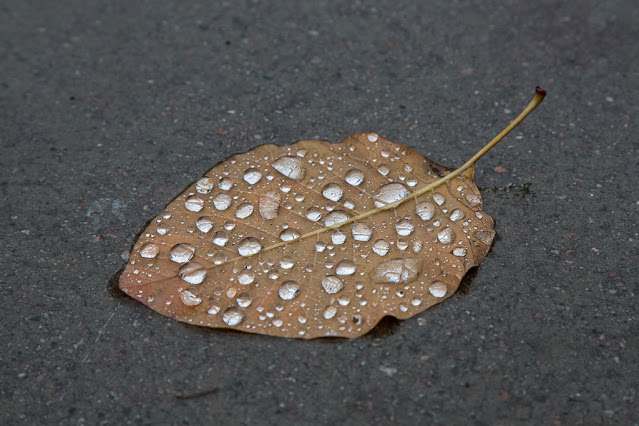 A day of domesticity yesterday-- laundry, vacuuming, running errands, walking the dog. I picked up some new books I ordered from our local bookshop, David Leavitt's newest novel and an entire book about London street signs. (Anyone who knows me knows I'm into weird stuff like that.) I also bought a big bag of compost so I can lift our dahlias and store them for the winter, but I couldn't get the job done because it rained most of the day. At least now I'm prepared. Maybe I can do it today if it's drier.

Another blogger said all this rain is the remnants of Tropical Storm Eta, from the USA. I can't find an authoritative source to verify that but it seems likely. 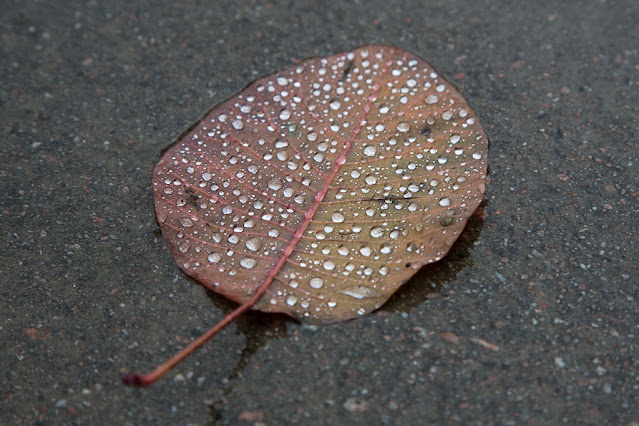 I managed to get Olga to the cemetery for a walk, and it rained on us pretty steadily the whole time. Surprisingly Olga seemed fine with it. If it starts to rain once she's already out, she copes -- it's only when it's raining (even a little bit) as we walk out the door that she digs in and refuses to move.

We had the cemetery mostly to ourselves, and then as we were leaving, I saw why -- about 20 people were clustered under the roof of the chapel buildings, waiting out the storm. I tried to take a video showing how peaceful it was, being alone in the cemetery with the rain falling, but the minute I took out my phone Olga started barking in protest. She really does run the show. 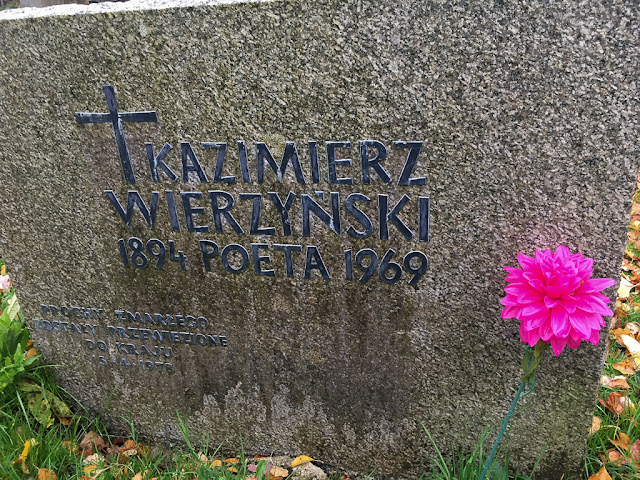 Someone left a floral tribute on the grave of Polish poet Kazimierz Wierzynski. I have tried to find some of Wierzynski's poetry online in English, but it's not that easy, even though he's apparently a big deal in the world of Polish poets. The best I could do was a few lines included in a book review.

Anyway, apparently he's got at least one local fan.

Did you hear that Boris has sacked Dominic Cummings? Cummings is the UK's Steve Bannon -- the evil whisperer in the ear of the national leadership. An ardent Brexiteer, he's been pulling the puppet strings for years, and meanwhile violating lockdown rules and generally being an ass. We're coming down to the wire on negotiating a trade deal with the European Union, and I wonder if Cummings and Johnson were at some sort of impasse over that. At any rate, he's out now.

Last night, Dave and I watched "Sweet Charity," the 1969 film featuring Shirley MacLaine. It was one of my dad's favorite movies, but watching it here proved to be a trial. I couldn't get it on Amazon, Netflix or iTunes, but I found it streaming on something called Sky Store. I had to buy it for £7.99. Then it wouldn't stream on our television! I could see it on my computer but when I tried to show it through our TV monitor, I got something called an HDCP error.

Apparently HDCP is some kind of digital rights program that prevents piracy -- but can also prevent legitimate purchasers of digital content from watching that content on their televisions. Why?!

We wound up watching (ironically) a pirated version on YouTube. The screen size was reduced and the sound wasn't ideal, but we made it work. I hadn't seen that movie in many, many years. In fact I'd completely misremembered the ending. We enjoyed it, but some wine helped.
Posted by Steve Reed at 7:16 AM

You appear to be getting rather irate about HDCP. Take a chill pill Steve! HDCP ain't nuthin'! It stands for High-bandwidth Digital Content Protection which would, in my humble opinion, be a good name for a country and western band.

I should let you pick some movies for me, I[m in a rut...

Do you know how to get around it? The only solution I found was to buy some kind of device that attaches to the HDMI cable -- which obviously wasn't an option for instant viewing last night.

I loved the show and movie Sweet Charity. Amazing how shocking it was considered at the time.

Once upon a time we had nothing other than bird song, telling each other stories around the fire. Then radio came along. Then TV, then colour TV, then my beloved IBM golf ball typewriter on which I hammered away. So far so fine. So life enhancing.

NOW? Now, it's all gone to the dogs. We depend on "signal" or rather NO signal, "you are not connected to the internet" (though you are), "error codes", long waits on the phone whilst being reassured by a disembodied voice that "your call is important to us". What's become of us, Steve? I crave simplicity which I cling to like a tenacious Staffy. Like, say, hard copy filed physically, rather than some beeping "cloud" storage.

We, humans, think we are superior to animals. We aren't. We are slaves to our superiority. Whereas Olga goes for a walk with you, has a sniff here and there to tell her all she needs to know, no pressing of buttons, comes back home, heaves herself into her favourite sleeping spot to dream of the last few hours' adventures. Next stop? Food. A bit of stroking by Steve and/or Dave. Repeat. Simple. To put it another way: If I were a dog, cat, a gnat, and particularly a majestic bird of prey I'd pity humans.

Sure that's cheered you up no end.

Before I forget, nice to remember your father like via a long time ago film - technical difficulties notwithstanding.

I'm always amazed when I can't find a movie that I long to see. Between Netflix and HBO, shouldn't every movie ever made be available? One would think...
But no.
Sigh.
Pretty, pretty leaf with its tiny drops of rain. You have a most artful eye.

The raindrop leaves are just gorgeous!

Rain doesn't stop you from getting out and doing things like giving Olga a good walk.

Love the raindrop leaves. Makes me want to go out and photograph the drops on the leaves here. It's a good way to find some beauty in the otherwise grayness of November.

yes, I do like the leaves with the rain drops. I did not know Sweet Charity was a musical (I just looked it up). Minnie does not like the rain and won't go out in it but at least she has stopped trembling and panting just because it's raining. throw in lightning and thunder though and it the whole works.

Pouring here! Raccoons on the deck eating grapes and peanuts, peaceful. Dexter was the same as Olga, OK if caught in the rain, I scooped him up ,carried him under my coat, but refused to go out into it from the front door, Just NOPE.

I love the raindrops on the leaf! Yes, the sacking of Cummings made the news here. When I first heard it, I wasn't paying much attention and when they said "left Downing Street for the last time" I thought they meant Johnson. I had to search to see what really happened. For a minute there, I thought Trump and Johnson had more in common than I thought.
I started a new Netflix series called "Queens Gambit" last night. I only watched the first episode but I'm looking forward to the rest. And, "The Crown" has new episodes starting today. I'm sure that is what I'll be watching tonight.

I'm pretty sure I'm often watching pirated versions of the Great South African Bake Off since some of them are backwards. I often think I should watch old movies that I loved in the past, then when I revisit them, I don't like them as well or have forgotten much of what went on. I always remember my feelings about films/books, but forget the details.

That first picture is very moving. I am not quite sure why. I really do love it though.

Friends of West Hampstead Library are having a zoom talk with the author of London Street Signs on Wed. 18th Nov. if you are interested.

1. The Graduate
2. Muriel's Wedding
3. The Adventures of Priscilla, Queen of the Desert

Well, I guess she was basically a prostitute, right? Even though she was euphemistically known as a dance-hall hostess. But yeah, certainly not shocking by modern standards.

Well, there's good and bad in our technological "progress," right? On one hand we have to wrestle with cables and a loss of signal, but on the other, we don't have to drive to a video store to rent a movie! (Or wait a year for it to come on television, and then make sure we're home to watch it.)

I was surprised this movie isn't more accessible. I called Sky Store and got a refund since I couldn't watch it!

Aren't they nice? I think they're leaves from a smoke bush (Cotinus).

No matter what, the dog needs a walk!

Years ago I took a photography class and one thing the teacher drilled into us is that we can go out and take photos in any weather -- and indeed, we should, because sometimes inclement weather gives good photo opportunities.

Fortunately thunder and lightning are rarities here -- not like the subtropics in Texas and Florida!

Dogs have pretty good sense. They won't get out in bad weather unless they absolutely have to.

I didn't realize Cummings would make the news in the states. I hope Boris moves to a more moderate position with him gone. We're watching "The Queen's Gambit" too! It's great!

There are a few movies I watch again and again, once every few years. How are the bake-offs backwards? Do they deconstruct a cake? LOL

Oh, good! I'm glad it connects with you!

Agreed! It's a great number. He doesn't even have much of a role in the movie otherwise.

Thanks for letting me know! I'll try to come!

The Queen's Gambit is amazing indeed. I made the move, was pawned and binge watched it last week.

Check, Mate, over and out,
U

The words are backwards which drives me a little nuts. Since I struggle a bit with their accents, I need the written description of their dishes. :)