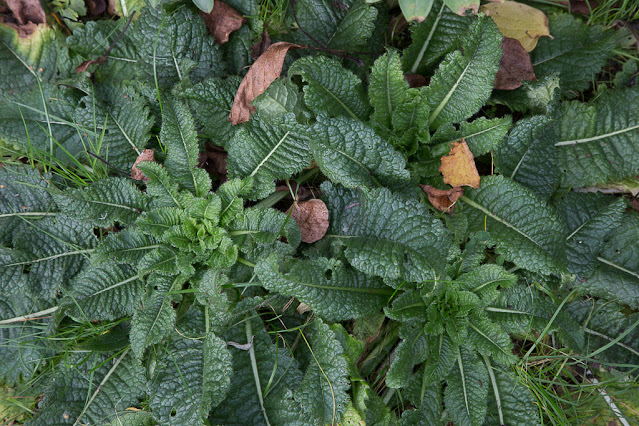 Back in the spring, I mentioned three teasels that sprouted of their own accord in our lawn. At the time they were just little things with a few leaves, but as you can see, they've become monstrous. I can't wait to see what they look like when they bloom, which surely will happen next year. The ones I planted have grown too, but they're not as big as these.

Teasels are basically weeds, but I like them. Not only do they feed birds, but they're virtually guaranteed to grow. Stick 'em in the ground and off they go. 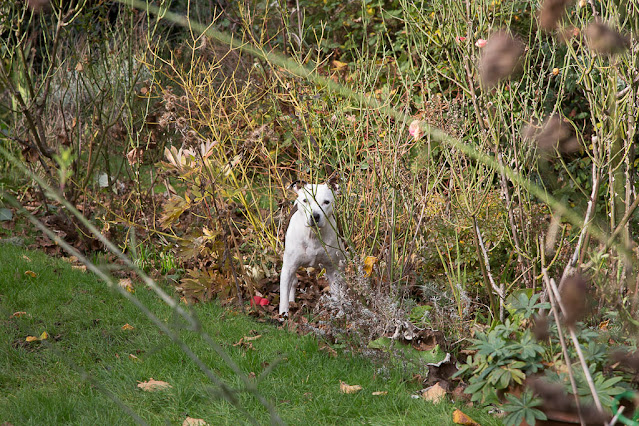 We had a ridiculously low-key Thanksgiving. Dave went off to the dentist at 9 a.m. for his root canal and was gone all morning. Olga and I spent the time in the garden, me clearing and trimming and Olga playing jungle dog amid the bare sticks of the flower bed.

I threw out several of our sadder potted plants, including our African daisy, which is looking lanky and spindly and pretty terrible. But when I pulled it out of the pot I saw that it was root-bound, and I felt lingering guilt. Maybe it would bounce back in a bigger pot? So I retrieved it from the garden waste bag and repotted it. We'll give it another year.

I also weeded our patio -- a bit ironic since just yesterday I was singing the praises of weeds. But they do have to be kept a bit in check, don't they? The biggest challenge there is Mexican fleabane, which constantly threatens to take over.

Later in the morning I watched the movie "An Early Frost," with Aidan Quinn, Gena Rowlands and Ben Gazzara, on YouTube. It aired on network TV way back in 1985, and it made an impression on me then as one of the first films to deal openly with homosexuality and the AIDS crisis. I hadn't yet come out at the time, but I knew I was gay and I knew AIDS was something I was going to deal with one way or another in my life – a terrifying disease that at that point was only barely understood and inevitably fatal. It's a well-made movie and not as sad I'm making it sound -- it's ultimately more about living with AIDS than dying from it. Anyway, I was happy to find the film online.

(There's another movie from that time period called "Family Business," which aired on an episode of American Playhouse and starred Milton Berle, that I'd also like to see. Berle played a dying patriarch and business owner with three sons, one of whom -- played by Jeffrey Marcus -- was gay. That movie made an impression too, but unfortunately, I can't find "Family Business" anywhere online. I've looked for it for years with no luck.)

Dave came home around lunchtime, a bit numb but not in too much pain, and we Zoomed with my mom and brother in mid-afternoon. My mom was being zany, laughing and making faces at the camera. Because of her dementia I'm not sure how much she follows in any given conversation, but at least I got to see her. The experience was depressing, honestly. She is so not herself these days. The Mom I know is sensible, practical, intelligent and emotionally reserved, and this Mom is downright giddy. But at least she seems happy. Things could be so much worse.

Finally, Dave announced that he didn't feel like cooking, and I could hardly press someone who'd had a root canal into service in the kitchen. (And if I cooked we'd be eating peanut butter.) So we ordered take-away. I had a turkey reuben sandwich – and it's honestly only just occurring to me now that at least I got some turkey.

At the risk of overburdening you with dog videos, here's one showing Olga chasing her Kong in the garden. You have to endure about 30 seconds of me commanding/begging her to drop it before I can actually throw it, but this is our usual routine. She has to feel like she's in charge. And she is.
Posted by Steve Reed at 7:15 AM