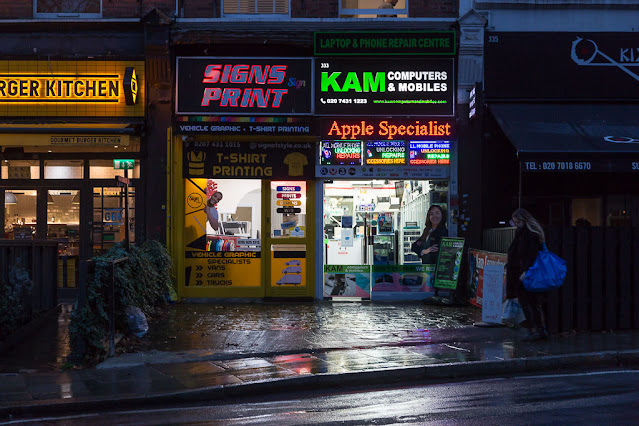 I took this picture shortly after 4 p.m. You'd think it was midnight! Ah, winter. I first photographed this pair of shops several years ago when there was a little take-away restaurant on the left side called Uncle Pink. A peculiar name, but not as peculiar as Uncle Wrinkle.

As you can see, I have nothing much to blog about today.

I forgot to tell you one of the main reasons I took the dog for a long midday walk on Sunday. Dave was home working on some musical arrangements, and he'd left his headphones at school. The piece he was arranging was what we often think of as can-can music, though it's officially known as the "Infernal Galop" by Jacques Offenbach. Well, I could only listen to so much can-can. I had to get out of the house.

As I've mentioned before, his students aren't allowed to play their usual wind instruments because of Covid, so the band is working with something called boomwhackers -- long colorful tubes that produce a note when they're hit on a surface. It's kind of like playing handbells, except not nearly as delicate. Playing can-can music on boomwhackers sounds like a heck of a workout, but I guess kids have a lot of energy. Some of them are playing drums, too.

Oh, and remember how I said my new pants (trousers to you British folks) arrived on Saturday? Well, I wore a pair to work yesterday, where I was surprised to find a package on my desk containing another two pairs of pants from Land's End. I guess when I called them about my postcode mixup they sent a replacement order! So now I have four pairs for the price of two. I told Dave I felt guilty and wondered if I should call and pay for the extras, but Dave said, "Don't you DARE!"
Posted by Steve Reed at 6:44 AM

Dave should not be your moral guide if he is encouraging dishonesty - at least that is what I as a stalwart representative of "British folks" have concluded. Send the extra trousers back or at least contact Land's End for their advice. I guess that the snake in Eden was also a boomwhacker.

I did. And felt compelled to take my comment down.

I am with Dave. I wouldn't have said "Don't you dare" - more like shoulder shrug "Leave it. Enjoy. Accidents happen." And they do. Which is the reason I always get a receipt. Nowadays they ask: Do you want a receipt? Yes, I do. Because I have been fleeced (no doubt, accidentally - but still into corporate coffers) so many times by various shops I've decided to not be anyone's fool. And if an accident happens in my favour, great. Unless it's a small private corner shop. Then I will go out of my way to reimburse the unlucky who runs a shop but doesn't know how.

Enjoy your "pants"/pairs of trousers. Wear them guilt free. Trust me and life in general, Steve, it's all swings and roundabouts.

I hadn't thought about playing wind instruments but it makes sense that playing them could be a problem. I had a similar "delivery" situation last fall when I ordered a book from Amazon. When it never arrived, I contacted them. They investigated and finally replaced the book....with two more. Shortly after getting the package with the two books, I found the first book sitting on my bookshelf. I had it all along, I just didn't remember it arriving. So, two of my friends got free copies of that book.
I love that night shot above. I've been to London at the end of November before and I remember how dark it is so early in the evening.

if you returned them you would have to pay postage, would you not? and I imagine they would tell you to just keep them. it was their choice to make sure the order was fulfilled, so I'd keep them. and yeah hours of can can music would send me fleeing too.

Remember when I was having a similar moral dilemma about my shoes that came so very late and I thought I'd gotten a refund on them already? I think I did end up having paid for them so all was sorted out but still- I know what you mean. And now you won't have to buy pants for a decade!
I would get food from Uncle Wrinkle's. You bet.

The 4:00 pm light there reminds me so much of when we lived in Port Townsend, WA on the Olympic Peninsula. I was so unprepared for winter light at the latitude. It was one of the reasons we moved back to California.
It'll be interesting to see if Land's End figures out their double shipping.

Well, I think you've found a good way to get two for one!!!

I am like Dave. Don't you dare send them back or offer to pay for them. Just say you are blessed.(laughing) I know you are feeling guilty for keeping them but I have had so much trouble with shipping . I wish they would send me extras. The missing tickle me elmo never showed up. Walmart sent another one. I've gotten glass items broken. They should choose shipping better. I know you said you had the wrong zipcode but by the address they should have known the zipcode.

I meant the one who delivered should have known the zipcode.

Just you wait until the Lands End goons show up at your school and rip your trou off your screaming body!

I've heard of Offenbach but don't know that I've heard anything by him. I used to get out of the house when the TV was blaring some show that I didn't want to watch. My late husband was a big TV/noise guy whereas I prefer it quiet. It is dark here between 4 and 5. Kind of depressing.

Pants in abundance, good thing, you can wear two pair at the same time, winter is coming. Of course i clicked the link to the can can music and am very sorry for it. Ear worm, can't shake it.
We received two checks from the power company because we have solar panels- they were the same amount, quite a hefty number too- Dennis can not stand things being suspiciously generous, so of course he called and tore up one of the checks. We could have been rich! Dennis is so honest that he told Erik when he was a wee lad, that Santa clause , tooth fairies and garden elves were made up by MOM. Subdued The joy on Christmas morning.

In my view you will have to go to so much bother to return the pants when it was the company's incompetence that resulted in you having four pair. It's not a moral dilemma for me.

I'm in the minority in that I wouldn't be comfortable wearing those pants! I would call and if they wanted them returned, would request a prepaid mailer to send them back in. Karma and ocd.
Sue

I would absolutely LOVE to hear that piece played on boomwhackers!! I wish I could be a fly on the wall when it's performed :D