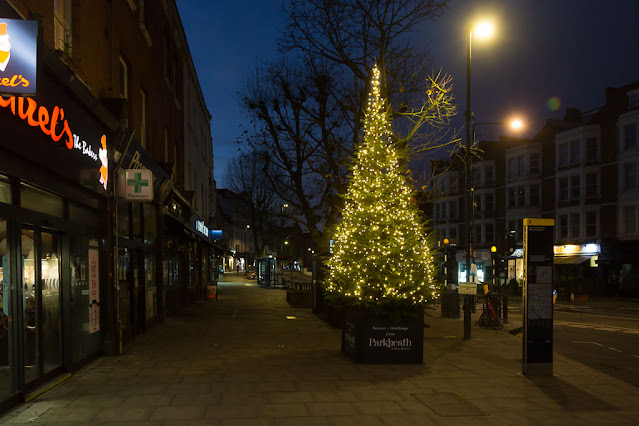 It's already Christmas on the high street in West Hampstead! I took this yesterday morning while walking Olga. You can see how dark it is when we walk at about 6:30. There's just a hint of dawn on the horizon.

My boss lost one of her earrings yesterday at work -- a little jade leaf that her mother had given her. We all went into full-scale search-and-recovery mode, walking slowly around the library and crouching down to peer under tables and shelves. One of our teachers, who is of Pakistani descent, said a prayer that is supposed to help with the recovery of lost items. And then, after about half an hour, voila! Guess who found the earring? That's right -- eagle-eye Reed. It was lying right in the middle of the floor between two shelves. We mused about how all of us had searched that space before and none of us had seen it -- I think we were naturally inclined to search near furniture or around other obstacles, rather than right out in the open. It's a miracle none of us stepped on it. 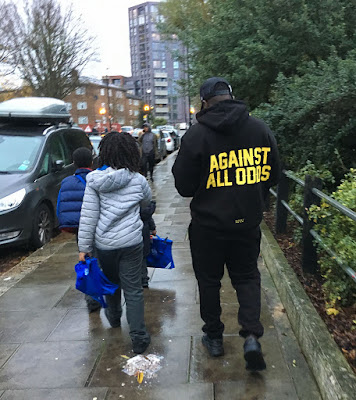 On my way home from work I walked behind this man, whose sweatshirt amused me. I have no idea what "Against All Odds" is supposed to mean. I immediately thought of the Phil Collins song, and the movie it came from by the same name. When I started my freshman year in college, and had newly moved to the dorms, that song was on the radio all the time. I remember hearing it while lying by the pool, back when I did things like lie by pools, and while driving around in my '77 Pontiac Sunbird. I still have a soft spot for both the song and the movie, featuring a handsome Jeff Bridges and a stunning Rachel Ward and exotic locales in Mexico.

I'm sure that man's sweatshirt has nothing to do with any of that, but it sent me down a nostalgic rabbit hole.

We got some bad news from my brother in Jacksonville. Remember Queens, his dog, whose aggressive affection left me with scratches on my arms from her nibbly puppy teeth? Well, she broke two molars, and while treating her for those damaged teeth the vet discovered she had an aggressive form of lymphoma. She wasn't eating and was clearly unwell, so Queens is no longer with us. It's pretty shocking, considering she was less than four years old. This morning I re-watched the video we made last year with my Go Pro camera attached to her back. Poor crazy dog. My brother says the whole family is broken up about it.
Meanwhile, back in London, another annotation has appeared on the mural of our own deceased celebrity dog, Sugar... 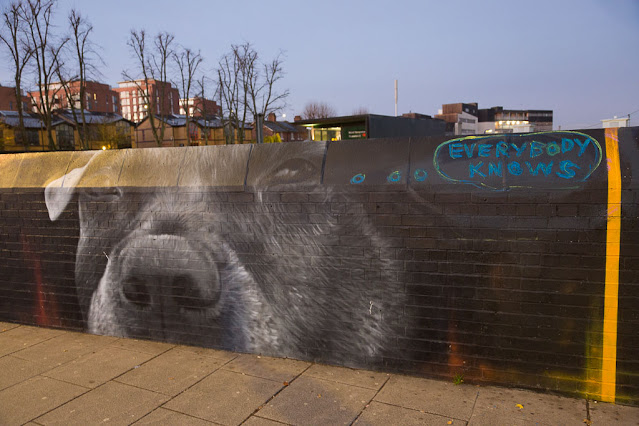