A Rainbow Of Sorts

When I was walking home from my photo outing on Friday, I found this damp piece of note paper on the sidewalk -- someone's marker doodle, washing out in the rain. It's just one piece of paper, but you see both sides above. I like the symmetrical effect, complete with grit from the street.

Getting those two images to appear side-by-side in New Blogger turned out to be no mean feat. I followed the instructions on this page, which involved dipping into the HTML code. Then I had to tweak the photo sizes and dimensions until I got something close to what I wanted. It wasn't difficult, but it was fiddly, and it's still not ideal -- I don't know why there's so much empty space above and below the images. It looks passable on my computer; I hope it also works on a phone or tablet.
Yesterday was pretty low-key. I've been debating what to do with our canna lilies over winter. They need some protection, and I briefly brought them inside, but they're big and tattered and I think they also need to die back and have a dormant period. So I put them back out. I'll wait for a frost to nip back the leaves, and then I'll cut them back and put the pots in the shed for a couple of months. Fingers crossed.

Dave and I took Olga to the cemetery together, which doesn't happen all that often. (Dave, you will recall, isn't crazy about dog walks – or any walks, really.) 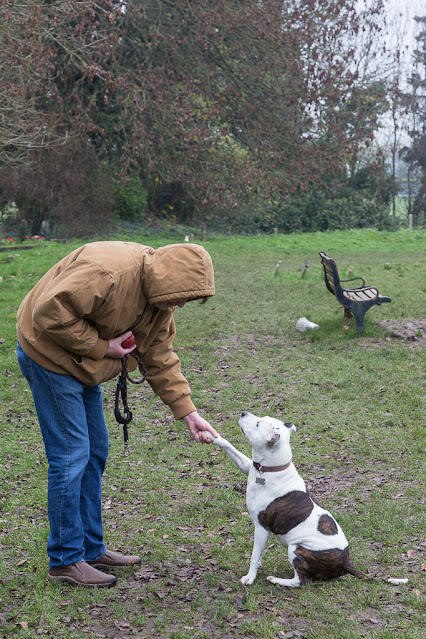 Olga knows that if Dave is going to throw her Kong, she first has to give him her paw. It's just part of their routine. 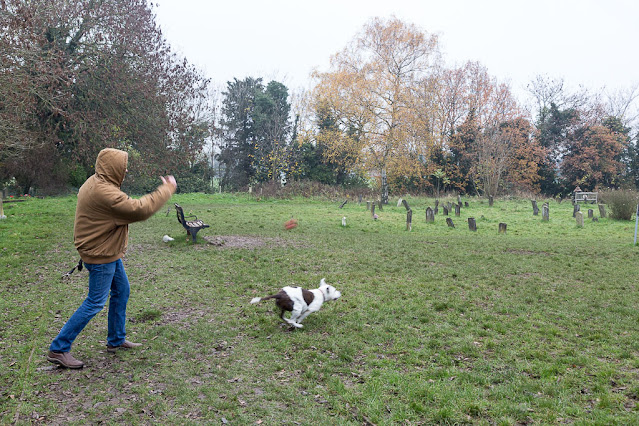 While walking in the cemetery we found a nice enameled iron Le Creuset pot beneath one of the spigots, I guess for dogs to drink from. Had I been alone, I would have grabbed it for Dave and substituted some less luxurious vessel – the dogs don't care, after all – but he said he didn't want it. I was shocked! I bet it won't be there long. It's probably gone by now.
Speaking of the cemetery, remember the stained glass windows? Well, I wrote the cemetery managers last week and asked if there's some way I can gain access to the chapel to photograph them. We'll see if they respond.

Last night I had the weirdest experience. We were watching an old episode of "Unsolved Mysteries" from the '90s, and the subject was a murder case from my hometown, Tampa. All of a sudden, on the screen, was a friend of mine, a reporter at the time for the big newspaper in the area. It was so weird to be sitting in London and see someone I know well, looking like they did 25 years ago, on my television! I took a picture of the screen and shot her a note on Facebook, saying, "Look what just popped up on my TV!" We had a good laugh about it.
Finally, some of you asked for Dave's pumpkin pie recipe. He referred me to this YouTube video, which includes a link to the recipe below it. Apparently that's the one he's been following. Enjoy!
Posted by Steve Reed at 7:44 AM