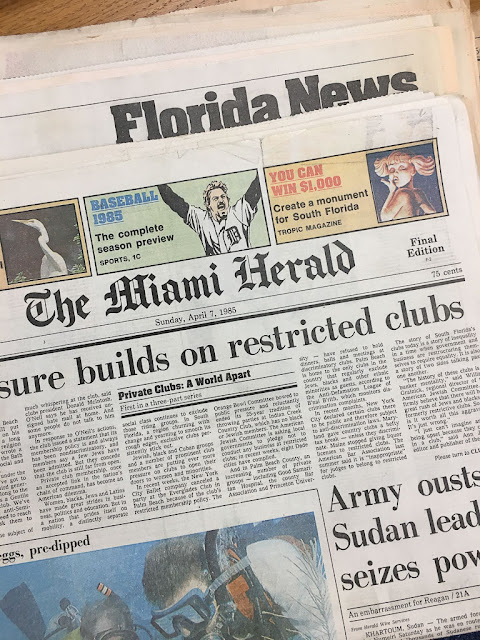 People sometimes donate weird stuff to our library. They imagine we want their tattered old paperback books or their back issues of Variety magazine. We got one of the strangest donations ever yesterday. Someone dropped off a plastic bag containing an entire issue of The Miami Herald from Sunday, April 7, 1985 -- as well as three old Florida state driving handbooks (the kind you study before you take your driving test) and a British magazine from 1983.

There are so many questions.

Why April 7, 1985? The front page isn't particularly compelling (above). Why is this old newspaper in London? Has it been here all this time? And why did the donor imagine a school library would want it?

It is a strange twist of fate, though, that it landed on my desk -- since I'm from Florida and spent some memorable weekends in Miami in the 1980s. The newspaper isn't much use to the library, but it's been incredibly entertaining for me. 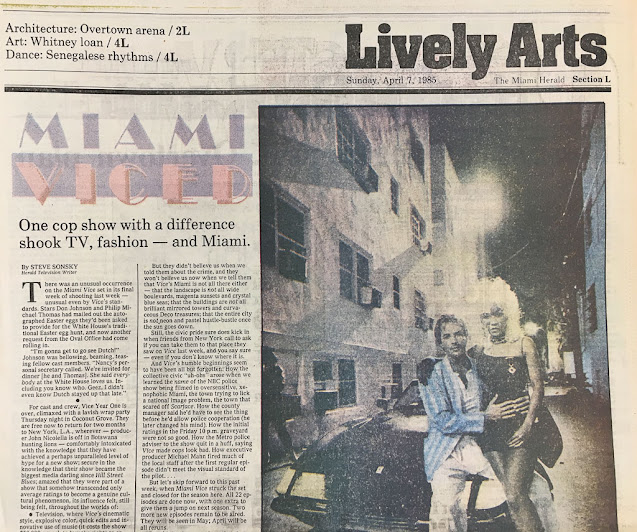 There's a big article by TV writer Steve Sonsky on "Miami Vice," the flashy '80s TV phenomenon that helped put Miami on the map for millions of viewers. When this newspaper came out, the show was just wrapping up its first season. Locals were still musing over what it would mean for the city and its image:

"South Florida, thanks to Vice's filtered, candy-colored, candy-coated image of the tropics, will never be viewed in quite the same way again," Sonsky wrote. "We are hot again. No, we don't look as good as the show makes us look, just as crime was never quite as bad here as the rest of the country thought.

"But they didn't believe us when we told them about the crime, and they won't believe us now when we tell them that Vice's Miami is not all there either -- that the landscape is not all wide boulevards, magenta sunsets and crystal blue seas; that the buildings are not all brilliant mirrored towers and curvaceous Deco treasures; that the entire city is not neon and pastel hustle-bustle once the sun goes down."

This article seems the most likely reason someone might have saved this issue of the Herald. But if so, why did they save the whole thing, and not just those few pages? (And look how terrible that photo looks. Fortunately color reproduction eventually improved and within a few years newspapers looked a lot better.) 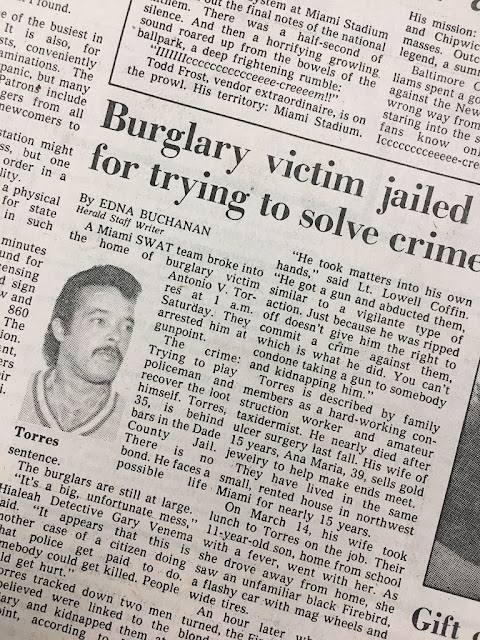 There's also a byline by Edna Buchanan, the legendary Miami police reporter who a few years later would write one of my favorite journalism books, "The Corpse Had a Familiar Face." I don't think I've ever read one of her daily stories before. It's a very Miami tale, about a "construction worker and amateur taxidermist" who tried to kidnap some guys he believed ripped him off, and thus wound up in the hoosegow himself. 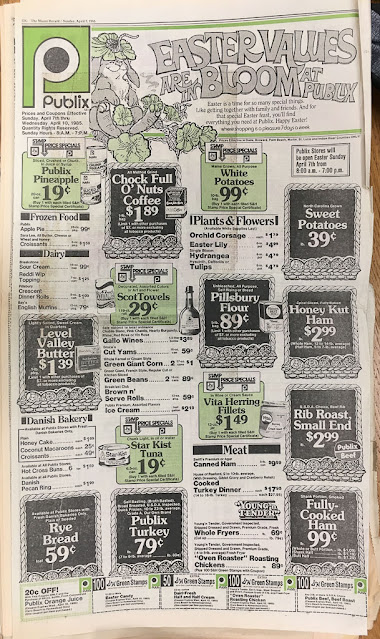 The grocery ads are kind of fun. At Publix, they were still giving away S&H green stamps, and you could redeem stamps and pay just 19 cents for your tuna fish or 29 cents for a roll of paper towels. You could also buy an Easter hydrangea for a little less than $5, but if you planted it outside in Miami, it was bound to fry.

The personals were kind of intriguing. I wonder if the 25-year-old "considerate, trim, attractive Oriental male" ever found his "sincere female"? He'd be 60 years old now. And what about those four women who all went in on an ad together? Looks a bit fishy to me, but who's to say.

Finally, at the movies, quality fare like "Porky's Revenge" and "Police Academy 2" was on offer. It's easy to forget, when looking back, how much crap was foisted upon audiences then too. We only remember the good movies now. For example, we all know "Return of the Jedi," but who remembers "King David," starring Richard Gere? I had no memory of it and had to look it up -- it was a box-office bomb and was panned by the critics.

On the other hand, I do remember going to see "Desperately Seeking Susan," with Madonna. It wasn't exactly quality either, but I enjoyed it.
I could go on and on down memory lane -- the ads for Barnett Bank, where I had an account until it was swallowed up by some banking behemoth or other. Likewise the ads for Burdines, a Miami department store that was a favorite of mine until it was absorbed into the Macy's empire.

Another interesting note -- the pages are huge. Newsprint was pretty cheap then, and broadsheets were really broad. These measure roughly 14 by 24 inches. Nothing like the downsized newspapers we see today.
I have no idea what I'll do with this newspaper, but for now, I'm keeping it.
Posted by Steve Reed at 6:43 AM