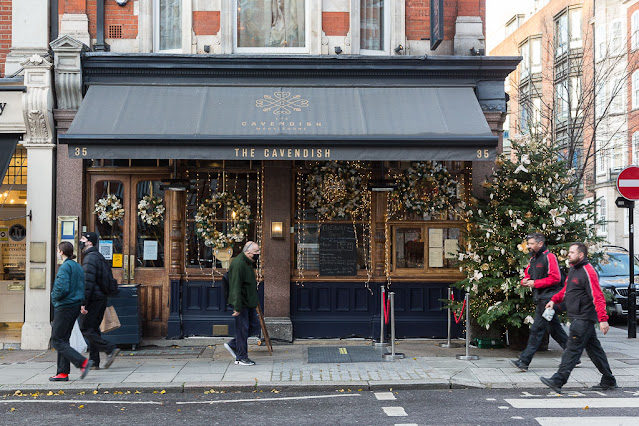 When I was down in Westminster on Thursday, it was sort of sad seeing the businesses dressed up for Christmas, and yet closed by Covid. The pubs are only able to offer take-away. You can see the take-away window at the Cavendish, above, between the red ropes next to the Christmas tree. If you're really set on having a pint, I guess take-away is better than nothing, but it's just not the same. Part of what's so wonderful about pubs is the warmth, the conviviality, especially when it's cold and wet and blustery outside.

Oh well. We do what we must. Hopefully we'll all be past this soon enough.

Our last day of school was yesterday, and now we're off until Jan. 11. Our break is slightly longer than usual this year because some people are traveling, and with all the quarantines and whatnot it takes more time. Most people I talked to are staying put, though.

We had another handful of Covid cases in school this week, bringing our grand total of positive tests for the semester to something like 35. From what administrators said, they appeared mostly unrelated to each other, but of course it's hard to tell. With cases ramping up in London, I think we're taking a break just in time – and I believe the government is going to allow a certain degree of household mixing over Christmas itself, so we may have a backlash from that in January. In which case, the rumor is, our school reopening may even be delayed. Who knows what to expect?

The best part of not being at work? I don't have to wear a mask all day! Woo hoo!

My boss and I took down the library Christmas tree yesterday, which is always kind of a sad task, especially before Christmas. I considered bringing it home like we did one year, but it's such an ordeal (and such a needly mess) that I ultimately passed. It looks like Dave and I will remain treeless, which is fine with me. 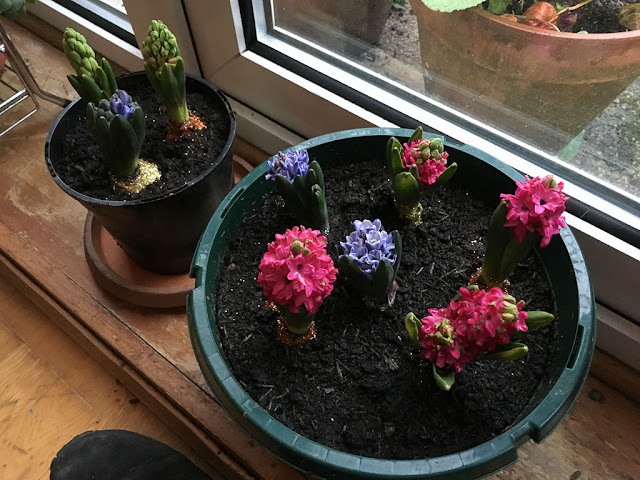 Remember the glittery hyacinth bulbs given to all the faculty and staff by the school's parent organization? Well, quite a few of them went unclaimed, so I adopted five more. I brought them home and planted them yesterday, next to the three we already received. They're already flowering, making the entire living room smell like spring.
Posted by Steve Reed at 7:26 AM