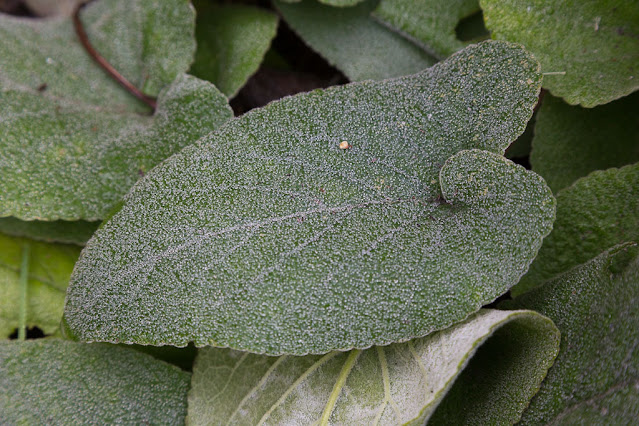 We are finally, barely, getting some freezing weather. When I went out yesterday morning, there were icy crystals sprinkled like sugar over the leaves of the phlomis... 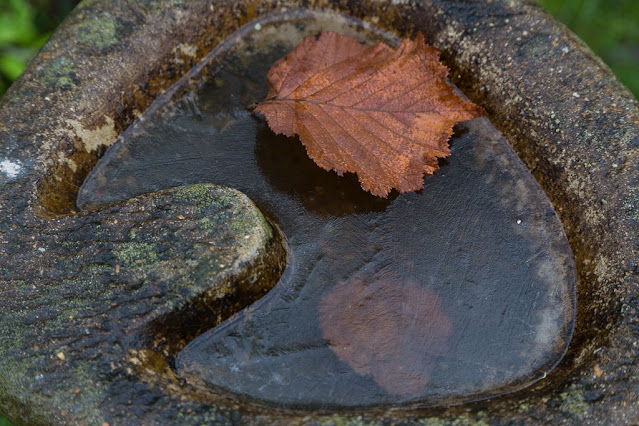 ...and the bird bath was frozen over.

I hadn't brought in any plants, because the weather forecast didn't call for freezing temperatures, but obviously we got there anyway. Most things survived unscathed. Our little ornamental pepper plant got nipped, but I think it will leaf out again. Last night I brought everything inside or put it in the shed -- we're supposed to be pretty cold through the end of the week, with a possibility of snow showers.

Everything, that is, with the exception of our Chinese banana and Dave's tree fern. The banana is too big to move, and although its leaves will die back, it's frost hardy. Supposedly the tree fern requires some protection, but I'm leaving that up to Dave. Right now its fronds are still long and lush and it looks good; Mrs. Kravitz never does anything to hers and it's fine year after year. I wonder if we just don't get cold enough here in the city to do it any real damage.
While moving the smaller plants I realized that we have eight geraniums. How did that happen?!
Dave and I took Olga to the cemetery for her walk yesterday. It's always an extra bonus when Dave feels like accompanying us. I've also been plowing through my ridiculous stack of accumulated New Yorker magazines. I almost never read the fiction -- which is strange because I love novels, but anyway -- I came across a riveting short story by Rebecca Curtis called "Hansa and Gretyl and Piece of Shit." (I admit it caught my eye because of the title. William Shawn is rolling over in his grave!) There was also a fascinating piece about a couple of renegade metal detectorists in England (who sound like jerks, to put it mildly).

I still have four more issues to go!
Posted by Steve Reed at 7:36 AM