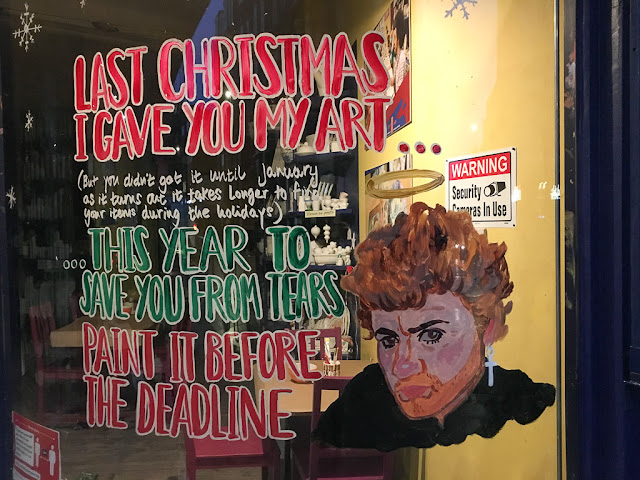 This sign is in the window of our local ceramics shop, reminding people to get their art done early for Christmas. I wonder if this place will even stay open now that we're in a Tier 3 lockdown. I'm guessing painting ceramics is not deemed an essential activity.

The image of George Michael isn't the most flattering. It looks more like Jeane Kirkpatrick. (Spell check keeps trying to change that to "Jeans Kirkpatrick," which would be a good drag name for someone really into denim.) Michael lived in nearby Highgate, so he's kind of a local hero – hence the halo, which surely overstates his purity of nature.
I remember when I first saw him in a music video, back in the summer of 1984, when I was on a long weekend with some friends in Daytona Beach. It was the video for "Wake Me Up Before You Go-Go," and like every other teenage gay boy I was smitten. I loved his hoop earrings most of all -- one in each ear, which was not the way guys wore earrings in those days. A single stud in the left ear was the only permissible way, at least in suburban Florida, and even that was pretty daring. So George seemed brave and beautiful and although it seems hilarious now -- because that video is the gayest thing ever -- none of us knew he was actually gay. 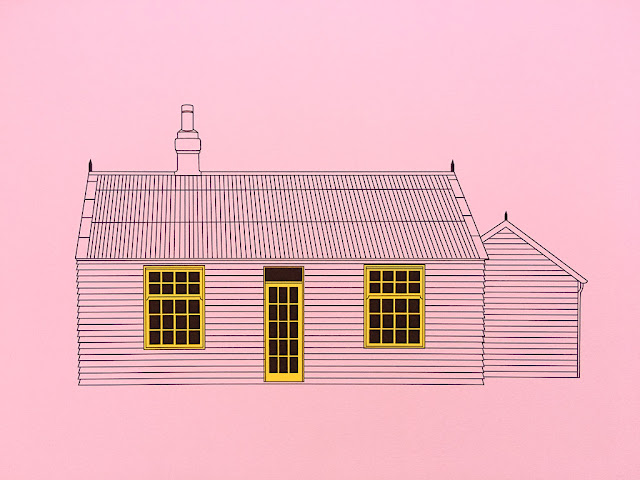 Speaking of gay, remember how I donated to the ultimately successful effort to save director Derek Jarman's former oceanfront home, Prospect Cottage, for public use? Well, this is one of my rewards for donating -- an art print of the house by Michael Craig-Martin. It arrived just the other day, in its own little portfolio. I had planned to get it framed, but I like the portfolio so much I may just keep it in that. (You may remember that I visited Prospect Cottage myself a couple of summers ago.)

I'm also supposed to get a photograph of the gardens, but that hasn't come yet. Supposedly everything has been slowed down by Covid.

Otherwise, not a lot of news around here. Time to walk the dog!
Posted by Steve Reed at 6:43 AM