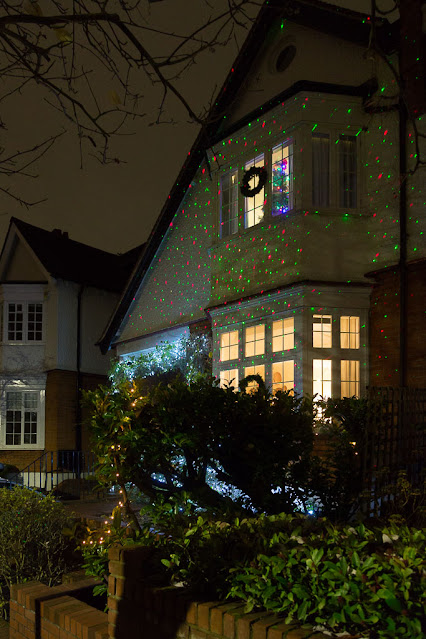 Poor Dave had to go back to the dentist yesterday afternoon for more procedures -- filling a cavity and fitting the crown for the tooth that got the root canal on Thanksgiving. As a result, his face was numb and he didn't feel much like cooking last night. We ordered out from a Japanese place on the high street.

As I went to collect my shrimp tempura bento box and Dave's sushi, I took my camera to capture some of the neighborhood holiday lights.

That's our neighbors two doors away, above -- they've got quite the holiday display going, with spangly lights and wreaths, a tree in the upstairs window and strands of white lights around the doorway and across the hedge (which you can't quite see in this photo). Is it unsurprising that they are Americans? My impression, at least from our street, is that British people go for a more subtle look. But I suppose that's probably not universally true – just as it's not always true that Americans like a lot of decorations. From the front, our house is entirely dark! 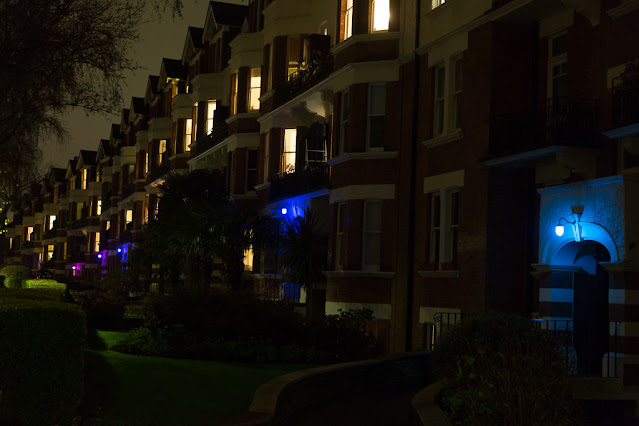 On the next street over, the entrance lights above the doorways to these flats have been changed to a type that changes color -- they go through the whole spectrum. I just happened to catch them in a blue/purple phase. 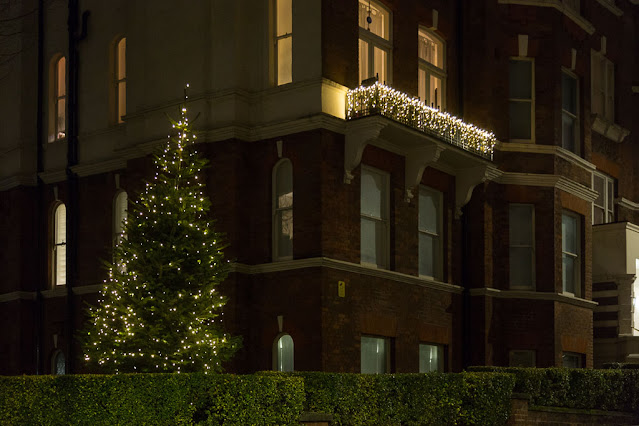 At this block of flats, they went for the elegant all-white-lights look. 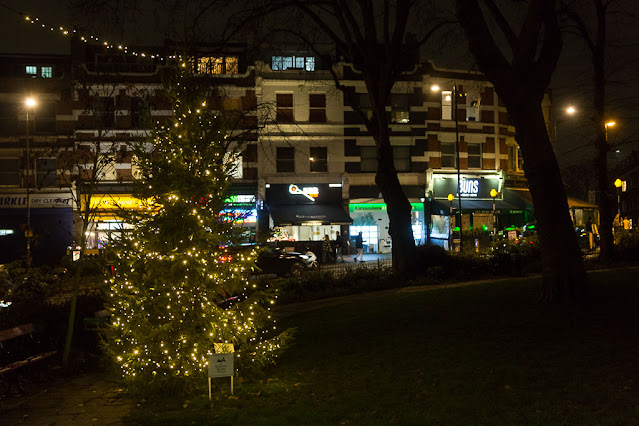 Here's the tree on West End Green, also decked out in white and sponsored by The Hampstead Butcher, where Dave buys our meat. 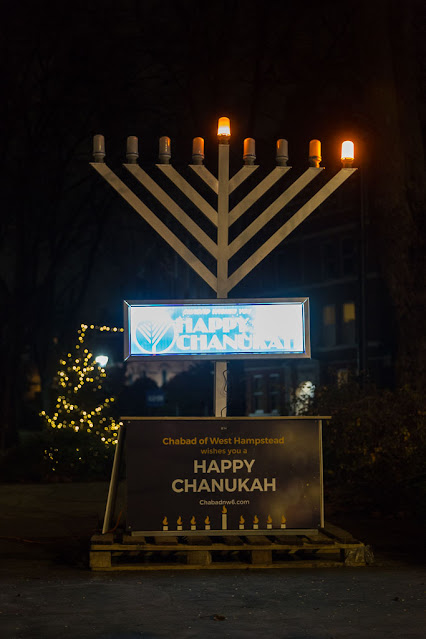 There's also a menorah, across the street from West End Green where all the Deliveroo drivers hang out, waiting to bring restaurant take-away to customers.

The other drama yesterday evening, aside from Dave's dental woes, is that Olga didn't come home from her walk until well after 5 p.m. It had been dark for almost an hour and I was starting to get concerned -- she's usually home by the time we arrive from work around 4 p.m. I texted her walker and said, "Olga is still with you, right?" He assured me she was. He just got caught up in traffic, and indeed he showed up a few minutes later and Olga bounded indoors as usual.

The only reason I even questioned him is that we had a repairman in the flat yesterday to fix the saggy kitchen cabinet. (So that's done. Yay!) I had visions of him inadvertently letting the dog out to wander the neighborhood. But she had her collar so I pretty much knew she was with the walker. She may be smart, but she can't put on her own collar.

On a follow-up political note, I mentioned Trump's hard-core supporters in my post yesterday, and my continuing fascination with their convictions and delusions over the election. The New York Times had an interesting column by Thomas Edsall about those supporters and their motivations. Basically, according to Edsall's sources, it comes down to a fear of loss of status, and a desire to reacquire that status. For some, that simply means dominating their opponents: "Essentially, extreme political behavior reflects discontent with one’s own personal standing and a desire to actively rectify this through aggression." (Blog reader Sharon mentioned this column in the comments yesterday and it is an interesting piece, well worth reading. Thanks, Sharon!)
Posted by Steve Reed at 6:29 AM

I am loving all the Christmas lights this year. People have really pulled out all the stops to make wonderful displays to cheer us all up!

Too many Christmas lights on a house may suggest a devil-may-care attitude to reducing the use of fossil fuels. I may sound like Scrooge but that's what I feel when I see lavish illuminations. There's a lot of truth in the old saying - Waste not want not.

Thanks for the NYT reference. We were always more the elegant all-white-lights look. But I loved wandering neighborhoods seeing the extravagance. By the way, I’m sure Olga could put on her own collar ... if she really wanted to do. But she’s got her “people” for that.

I agree -- I always like a good light display, as long as it's not TOO over-the-top. (My neighbor's, for example, looks great. And I'm not just saying that because they're my neighbors. :) )

Fortunately I think a lot of the lights these days are LED or some other variety using minimal energy. They're not like those big ol' bulbs we had when I was a kid!

My favorite Xmas decorations are always on other people's houses! That way I don't do any of the work. LOL

I love all Christmas illuminations, both subtle and garish. But let's face it, the garish ones are folk art. I tip my hat to those who let their freak flag fly.

These are great night shots from your neighborhood. I do like those spangly lights. I haven't been out after dark lately. I need to make a point of it.
I'm glad you read that article.

Your neighborhood is far more dressed up for Christmas than mine. I have NO DESIRE to go upstairs and get down the few things I've held on to. I feel guilty about that but then again, guilt is pretty much my default emotion. So- nothing new there.
Your worry about Olga was like a parent worried when a child is late coming home from school or a date. "Where IS that child/dog?" We want our babies to be safe whether of the furry variety or the human.

Love seeing the Christmas lights there. I've never celebrated Christmas, but I always love seeing the decorations. Makes me want to go out and photograph the lights on our little suburban street here.

Christmas decorations have become more gaudy all the time.

It's like Times Square in our street at the moment, and will be for nearly another month. Bah humbug!

I've always loved outdoor light displays. don't do it myself because it's not a holiday I participate in. actually there are only three holidays I participate in...Thanksgiving, New Years, and 4th of July and the last two not so much anymore since the little dog who hates loud noises came to live with us. I would like to have one of those lighted peace signs for the roof though.

I love all the decorations! I always think I prefer colored lights, but then I see displays like that balcony up there & think it's so pretty. We're pretty understated ourselves this year - a lighted wreath and one of those projection things like that first picture up there. One of our neighbors has a LOT of inflatables - I should wander up that way & take a picture :)

London seems to be the best at doing Christmas, even in the year of covid! We have cancelled Christmas this year.
That gave me a scare about Olga staying out late! Now you know how it feels to have a teenaged kid! Worrisome.
The NYT article is such a worthy read, thank you. No surprises, Just "and that's the way it is". We ought to have learned something from The Mao failure - the People's Republic horror, a pendulum swinging way too far.

Although I like looking at other people's lights and displays, I would never bother with them myself. I'm a Scroogy American! I can't get past the NYT paywall, but have been saying the same thing for years.

I love to look at the light displays too, but I don't have any lights hanging outside as I am too cheap to bother. I have put up all of my decorations inside my home and most are quite old - filled with lots of my memories of Christmases past.

All the serious tRUMPers I know have one thing in common: they are either pro-life and nothing else matters save that one issue, or their livelihood depends (in their minds) on keeping tRUMP in office.

Stopping by to tell you that the law suit our attorney general and over 100 Republican Senators filed with the Supreme Court was thrown out and never looked at. I think we all can relax because we are on the path to a better America. You have Senators like Mitt Romney was talking about how crazy this mess is. I know it is not going to stop the Orange mess in the white house for talking and keeping up mess on a daily basis but we know now he is not going to overturn the election. Everything he has tried has failed. God is in control although man think he is.

Thanks for the link to the column. It's interesting. It's bugged me since Trump's election that many Christians follow him ardently. I know he espouses many of their beliefs, but it's obvious he's not a Christian. I watched George H.W. Bush's funeral. Donald and Melanoma didn't even know how to follow the order of the service and didn't sing the hymns. They were a couple of lumps, as usual. I suppose poor Melancholia is pissed off yet again about decorating The White House for what she called fucking Christmas--as if she puts up the decorations herself.

Yeah, I don't mind a garish display. They can be fun too!

(I wouldn't say any of these are garish -- just to make it clear to my neighbors in case they read this blog. LOL)

Dark is all we have at this time of year!

We have a box of Xmas ornaments but I'm not going to bother with them this year. I think we'll probably skip having a tree entirely.

Yeah, they're fun even from a secular point of view.

I am not a fan of the inflatable ones. Fortunately those aren't a thing here in London. (No one has the space!)

I like your entirely secular approach to the holidays! Many of them don't hold much significance for me either now that I'm an adult.

I actually like colored lights, too. The white ones are a little monotonous!

Yeah, it's true -- that was a very parent-like reaction!

I don't mind very simple decorations. VERY simple. Like our one strand of lights up the avocado tree. :)

Yeah, that is one advantage to decorations -- they bring back memories of previous years. My mom has a lot of ornaments that were very significant to us when we were little.

Yeah, the abortion thing is huge. I suspect a lot of people are told in church which way to vote, even though tax law expressly forbids that kind of specific advocacy from the pulpit. My in-laws vote Republican, largely because of abortion, I think.

I SAW THAT! I was so happy the suit got thrown out. I hope the Republican party nominates a SANE candidate the next time around. We can't go through all this Trump baloney again.

I am puzzled by how strongly many so-called Christians follow him -- as if he is some kind of national savior rather than a crude, bigoted bully. The ministers I knew when I was growing up would never have supported someone like Trump.

I like to keep things simple but I love looking at others displays! Thanks for sharing this!