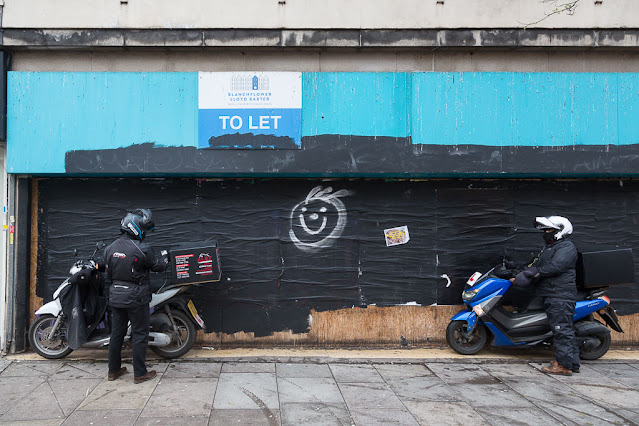 I actually got some things done yesterday. Woo hoo!

First, when Dave and I are working, we routinely have our packages sent to the school, because it's easier and more secure than having them delivered to an empty house. So when I ordered one of his Christmas presents many weeks ago, that's what I did -- thinking that by the time it arrived, school would still be in session. But of course the present took much longer than expected, and finally, on Monday, I got an e-mail saying it had arrived, so I had to walk to school to get it.

"Why didn't you have it sent here?" said Dave, still in his pajamas, before I left home.

"Because I didn't know it would take so freakin' long!" I replied.

I hope he appreciates the lengths I've gone to in order to provide him with a festive Christmas. 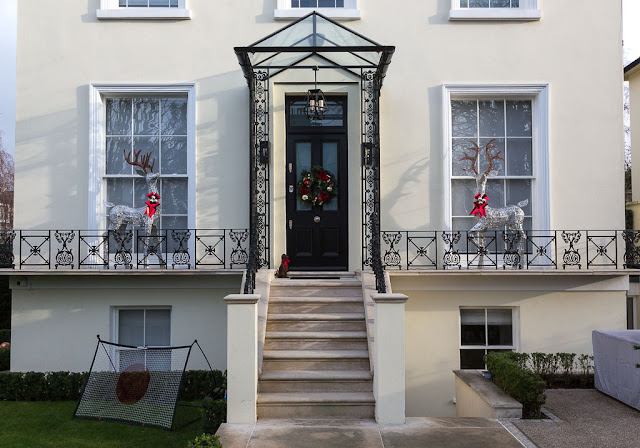 I took some pictures on the way, of delivery men on Finchley Road (top) and a festive house in St. John's Wood. What is that thing in the lower left of the house photo? I think it's a football goal, or some similar piece of sports equipment, but I wouldn't swear to it. It looks like the Japanese flag.

Anyway, I had to scurry all over the school building to find the package, but eventually I collected it. Then I made my way to the post office, where I expected to find a gigantic line like I did Monday. But the post office in St. John's Wood was EMPTY! No waiting at all! I got my mom's Christmas card mailed. I suppose she'll receive it in time for Valentine's Day.
Back home again, I made substantial progress with "The Pickwick Papers" and I'm happy to say that after carrying this book around for almost two months, the end is in sight. I am enjoying it, and I love Dickens' skill with the language and his humorous descriptions, but there are a lot of characters and I have trouble keeping (for example) Mr. Weller and Mr. Winkle and Mr. Wardle straight in my mind.

Here's some more garden-cam footage of the foxes in our garden. There are four brief clips spliced together, and in the second one (about 15 seconds in) we got footage of two foxes together! This is a first for the ol' garden cam. They even talk to each other a bit.

In the third clip, I'd left a pork chop bone in the back of the garden, and you can hear the fox crunching on it. Unfortunately I didn't put it far enough away from the camera so you can't really see the critter eating. Oh well.

The fourth clip, as you will see, is not a fox at all. In fact it's probably what the foxes are hunting. (Lest you think my leaving food out is attracting vermin, I haven't done that in months and months -- so they're living back there quite on their own.)
Posted by Steve Reed at 7:03 AM