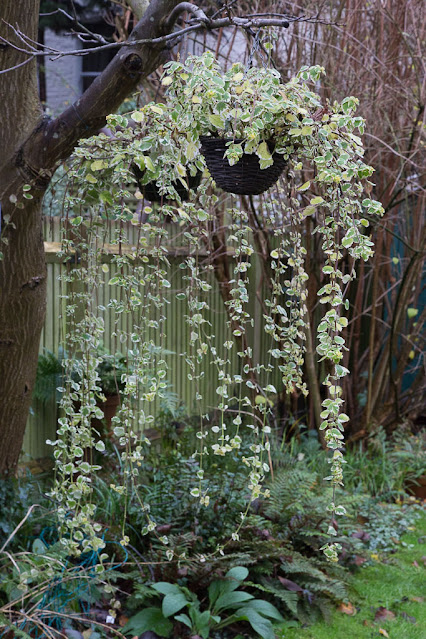 We have three large hanging baskets in the garden, filled with the plectranthus plants that Mrs. Kravitz threw away back in the spring. Don't they look nice? It's also called Mexican mint, apparently.

We haven't had a freeze yet, but I don't think they're cold hardy so they probably won't fare well when cold finally comes. I think plectranthus is normally planted as an annual, but I've toyed with the idea of bringing at least one of them inside to tide it over until spring. 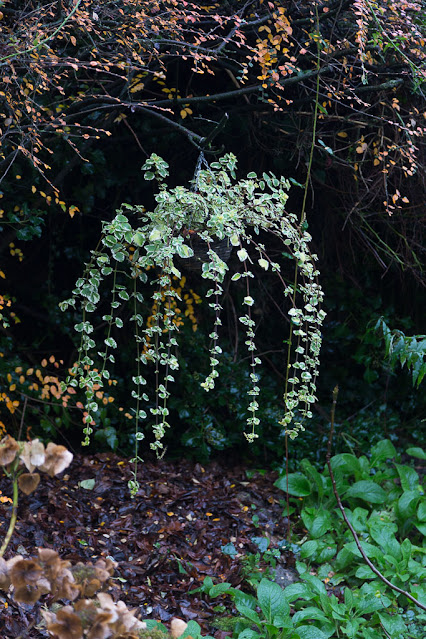 I'm thinking I could hang it from the curtain rod in the living room, though that might be a recipe for disaster.

Dave and I had to run some errands yesterday morning, and we took Olga along. It was damp outside but not rainy, and we walked all the way down to the post office to mail my mother's Christmas card, only to find it closed! Apparently there was a case of Covid among the staff so it's shuttered until Jan. 4.

We walked up to the produce market, where people were buying huge bags of fruit and veg. I don't know whether they were preparing for Christmas dinner or stocking up in case there are shortages. We've been told that because some of the European countries have closed their borders to the UK, given our new variant of coronavirus, we may see shortages of things like citrus fruit, broccoli, cauliflower and salad leaves. Of course, these are not things one can easily preserve, either, so I don't see how buying bags of it can help.
Dave moved on to the butcher and I took Olga and the vegetables home. She was ready to get out of the damp. I then decided to schlep down to the next closest post office, on Mill Lane, but when I got there, I was greeted by a line of at least 40 people. I don't need to mail my card that badly. I came home.

(I'm not sure my mom is even aware that it IS Christmas, so if she gets the card late it's not a crisis.)
Dave, meanwhile, popped in to the pharmacy where he wound up having a chat with one of our famous neighbors as they both waited. He said she actually initiated the conversation, and was very friendly. She told him she'd seen me walking Olga, and called her a "fabulous animal," or something like that. (Maybe she was actually talking about me?) He said he'd have asked for a selfie but his phone was dead. I was quite jealous -- although I've seen this neighbor out and about several times I've never spoken to her. (I'm not mentioning her by name to avoid appearing on her Google news feed like a common gossip-monger, but you can click the link above if you're curious about her identity.)

I hope Dave was properly distanced during the exchange. I wouldn't want him catching celebrity coronavirus.
Posted by Steve Reed at 7:47 AM