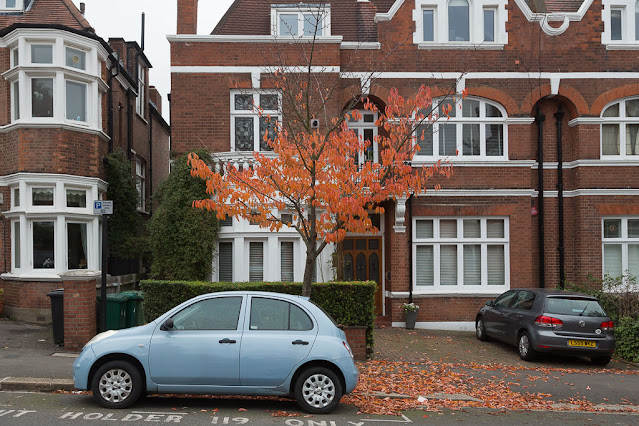 We spent yesterday mostly at home. I was a cleaning machine, again, vacuuming and doing laundry. I also made great progress in "Troubled Blood," my current book, and finished "Out of the Dust," my latest Newbery read. The latter, by Karen Hesse, was excellent -- one of the best Newbery books I've read so far -- about a girl living through the Dust Bowl in panhandle Oklahoma. I'll definitely recommend it to kids.

This tree on our street (above) is already losing its leaves, but for a brief time every fall it's a beautiful color. It's some kind of ornamental fruit tree, and it's always one of the first to change.

Olga didn't seem to want to walk in the morning -- still tuckered out from Saturday, I guess -- but after a long snooze she was ready for two loops around the cemetery in the afternoon. 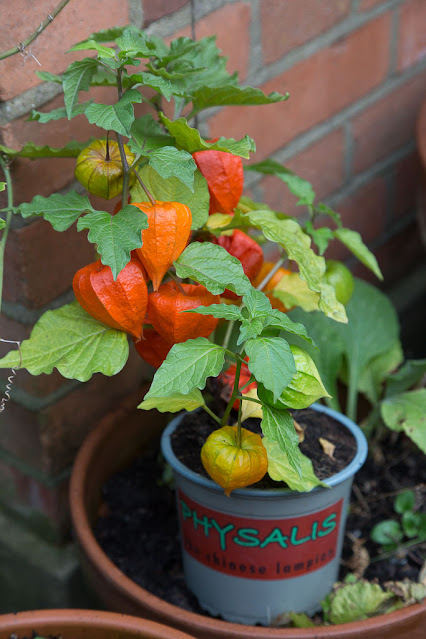 I picked this up at a florist's shop on Mill Lane. Because our Chinese lantern only ever seems able to produce one lantern per year, I figured having a second plant couldn't hurt. Maybe if they cross-pollinate we'll get more lanterns? I have no idea.

By the way, if you look at the pot, you'll see that it says "Chinese lampion." I first thought this was a laughable corruption of English by a foreign producer, but it turns out that lampion really is a word. It used to mean a lamp with a glass chimney in a carriage, but nowadays seems to mean a paper lantern. Who knew? 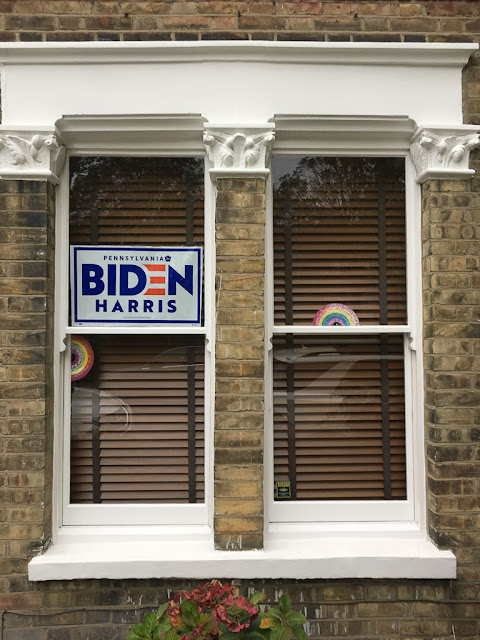 Olga and I found this sign in a window overlooking Fortune Green. Dave and I seriously considered trying to get a sign for our window, but there didn't seem to be much point, given that most of our neighbors aren't American voters. But I must admit seeing this gave me a boost.

I am feeling so much anxiety about this election. I keep telling myself, "No matter what happens, it's not the end of the world" -- but unlike in past years, I actually think it might be. 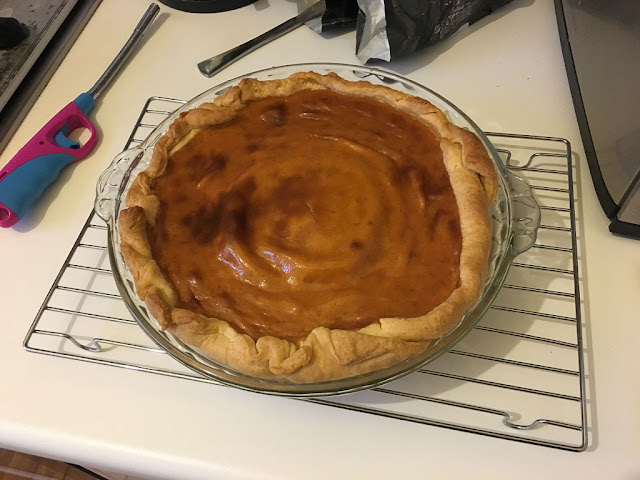 And here's Dave's pumpkin pie, which he finally had a chance to make. It's fantastic. We ate half of it last night!

You may be correct about needing more than one Chinese lantern plant. They grow very well here in assorted colours. I didn't know about lampion, and spell check is happy with it surprisingly. Is pumpkin pie savoury or sweet? I would guess the former.

I enjoyed reading this post but discover that I have no relevant comment to make so I will say nothing but this: "A wop bop a loo bop a lop bam boom!"

I worked with a teacher ( a skinny one at that) who had pumpkin pie every morning for breakfast It is full of eggs and milk after all
Adore Chinese lanterns - thanks for the reminder of them.
And if Biden loses the US could easily collapse into something unrecognizable.

I'm drooling over that pumpkin pie. It's OK though. I'm 1,400 miles away — and I'm wearing a mask. That sign would be nice to see anywhere. You're not the only one feeling that anxiety. Some days I actually get beyond my hopelessness.

The people who live in the house with the Biden and rainbow sign could be your new best friends!
Or maybe not.
I'd never heard of a "lampion." And I'll have forgotten by tomorrow. But that does indeed look like a champion lampion.
And Dave's pie looks like a champion pumpkin pie.

One of my mantras "We'll cross that bridge when we come to it". Works like a charm, keeping anxiety (and anticipation) at bay. Why gag now when you can suffocate later?

The one thing that causes me not only wonderment but concern that there appears to be a loophole whereby Trump could just refuse to accept the outcome of the election (in case Biden trumps him). How is that within the law? I suppose anything is possible considering that Hilary Clinton won the majority/popular vote but not the Oval Office.

Oh my, that pie made me hungry for a pumpkin pie! It looks delicious.
My apartment complex backs up to a very, very high end neighborhood of monster mansions. I walk in the area and sometimes take a short cut through when returning home. Almost every one of the mansions have Trump signs in front which I think is a bit ironic on landscaping days when all those hispanic workmen are working their mowers around those disturbing signs. It disturbs me so much that I haven't been going that way lately. Over the weekend, I drove over to my old neighborhood and to a couple of the other nearby historic neighborhoods. What a difference. Not one Trump sign in sight. Almost every yard had Biden signs and Kelly signs (for senate). It made me feel so much better. I'm nervous but I'm hopeful.

I love seeing that Biden-Harris sign in the window there. I feel the same way about this election and the end of the world possibility. Such a scary time.
That pumpkin pie looks so yummy.

Out of the Dust sounds like it would be a good story.

we're all anxious about this election and I do fear that if it doesn't go our way, it will be the end of the US as we have known it. it will become a restrictive and repressive place, the slave economy will once again be entrenched.

that pie does look good.

I like sweet potato pie better, but that pumpkin one looks pretty darned good! My Atlanta Braves lost last night & now their season is over (one win away from going to the world series!). I spent quite a while trying to convince myself that this wasn't a portent of doom. I had limited success.

Oh ye of little faith. What will be will be. Your new Chinese Lantern plant is beautiful. That pie looks delicious. Have a super day, hugs, Edna B.

That pie looks great. Pumpkin is one of my favorites, if there's whipped cream or topping available. I was wondering if you were favoring the Biden-Harris sign or the two rainbows. But I guess I know. Love the new Chinese Lampion!

America cannot stand and progress with lies. He(orange thing) only made low taxes for the rich and high taxes for the middle and poor. He also only tried like hell to cancel out everything Obama did to help all of us including the immigrants. If the Latinos vote for this sucker they must really have forgotten what he has done to their poor children. What bothers me mostly is the way he praise trouble. Everyday you see this butt hole he is talking about trouble and nothing about building our country back. What really angered me yesterday at his rally, he was telling his cult members that the lady Governor had blamed him for the white surpremacy group wanting to kidnap her and lock her up. His cult members start shouting lock her up and there he goes with lock her up and laughing. whenever he lose (I believe he will) and New York bring his ass down for tax fraud, the world should cheer them on and shout, lock him up. His punishment should be for America to send his butt to Iran and let them have their way with him. They could give us the bounty fee and pay us back for him having all those grown ass children traveling on our money. "Dirty dawg"