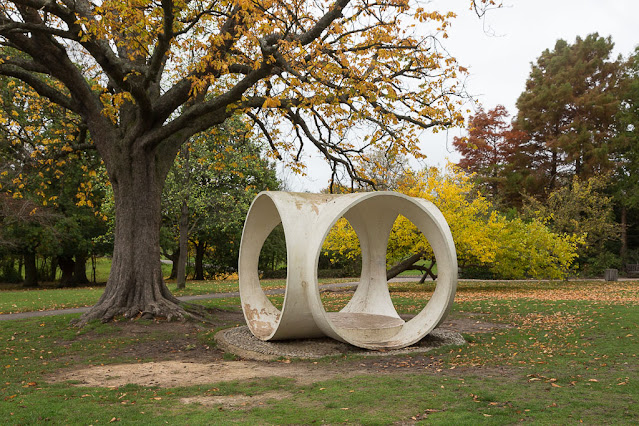 I woke up ridiculously early this morning. Our clocks changed on Sunday, falling back an hour, so when I woke up at 4:30 a.m., my body thought it was 5:30, which is at least closer to when I'd normally get out of bed. I lay there for a while but couldn't fall asleep again, so I got up to steal a shower before Dave. Now here I am, dressed, and it's only 5:39 a.m.!

This time change has really messed with my internal clock for some reason. I could barely hold my eyes open last night as we watched "The Great British Bake-Off" and indeed I nodded off during the showstopper, waking only in time to see that Sura's raw cake batter sent her home. (I think we may be an episode behind?) It was only 8:30!

I'm tempted to join the chorus of voices calling for an end to British Summer Time and Daylight Saving Time. People say, "Oh, but if the clocks don't change, children will have to wait for the school bus in the dark." Well, I remember waiting for the school bus in the dark, even with Daylight Saving Time, and it didn't kill me. And are there still agricultural reasons for this change, given that we now have sophisticated farm equipment and artificial lighting? I'm skeptical. But admittedly, I've never worked on a farm.

On another topic -- when I routinely walk through Golders Hill Park with Olga, we always pass this object (above). Usually it's swarming with about a hundred kids, but when we passed it on Sunday it was basking in splendid isolation, so I had a chance to take a good autumnal photo. I always thought it was a big pipe joint, put there for kids to play on. But when I looked more closely I realized the "pipe joint" had a raised floor, and that seemed unlikely.

Turns out it's a sculpture called "Gazebo" by British artist Wendy Taylor, from 1983. Wendy, I apologize for thinking your sculpture was a pipe.

So Amy Coney Barrett has been confirmed for the U.S. Supreme Court. I'm hopeful that as conservative and religious as she is personally, she'll wind up being open-minded enough not to become a monster a la Clarence Thomas. She seems like a genuinely decent human being, free of the character questions that plagued Brett Kavanaugh -- so that's something. (I'm trying to be positive, here.) We'll see how it goes.

Yesterday at work I wrote about my latest Newbery read, "...And Now Miguel." I wasn't crazy about it, and when I looked at Goodreads to see how other people described this 245-page novel about a shepherd boy in New Mexico, I found possibly the funniest review I've ever seen on that site. Hopefully Goodreads user Julie won't mind if I republish it here:

As we approached page 121 of this read aloud last night, my 10-year-old slowly slumped forward on the bed, a finger plugged in each ear. She didn't say a word, just slowly fell forward in silence.

I pulled her left finger out of her left ear and said, “What's up, honey?”

She looked up at me with glazed eyes and said, “I can't listen to one more word of this story.”

I looked over at my 12-year-old, who was busy sketching a picture of an animal (not a sheep), and, without looking up, she said, “It's over, Mom.”

Over for Miguel? The boy who wanted to grow up quickly so he could be a shepherd of his father's flock? The boy who aspired to climb the Sangre de Cristo Mountains of his native New Mexico, circa 1953?