It Had to Happen 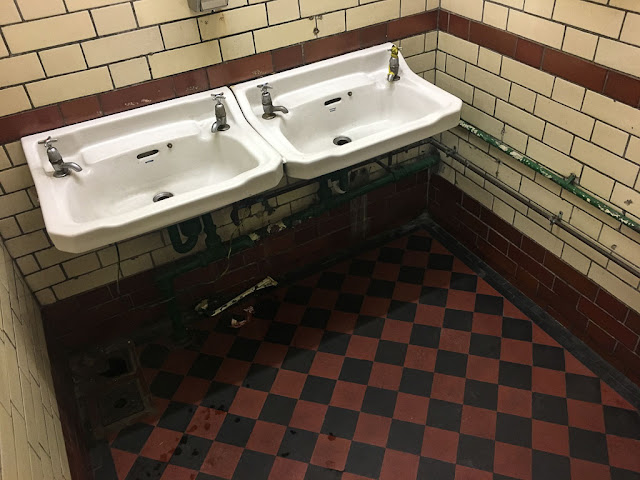 After yesterday's post, you probably knew this was coming! Yes, this is the interior of the Victorian-era West End Lane Public Conveniences -- specifically, the men's room. I walked over there after work and found it open and accessible.

The historical listing mentions the red-and-black tile floor, as well as... 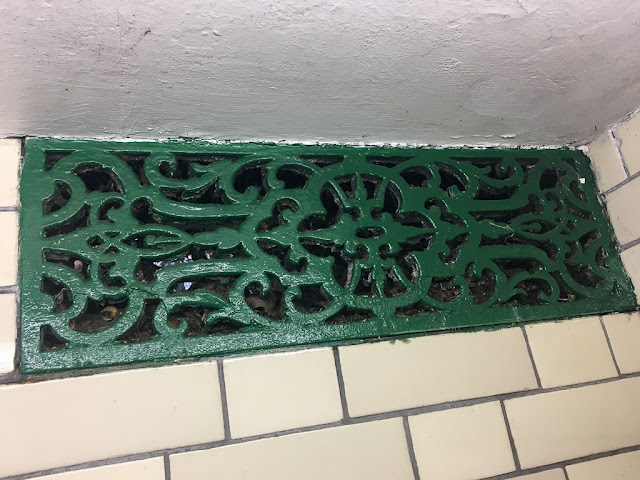 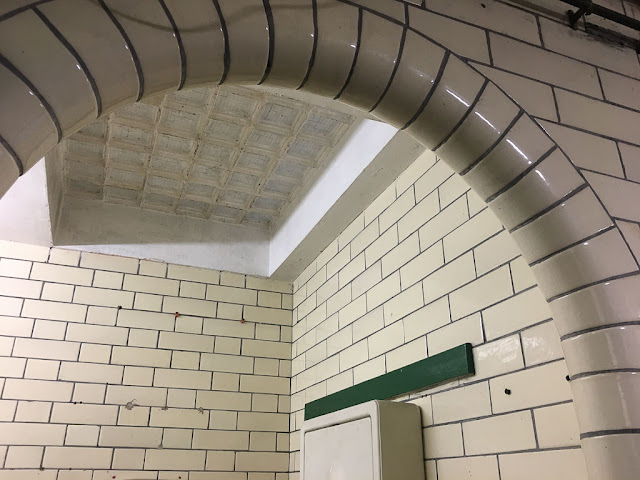 ...and the interior arched doorways. There also appears to be some kind of skylight, but it's been painted or covered over.

There's a bank of four or five full-length urinals which aren't in great shape. They were, however, made by... 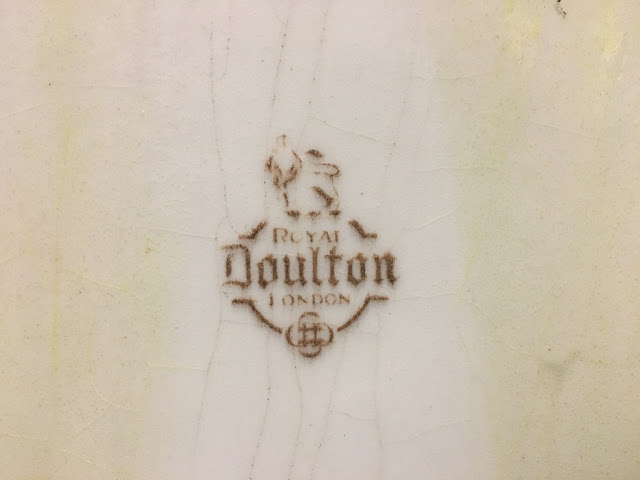 There are three toilet cubicles with complete walls and green wooden doors, like three closets side by side. (Which I suppose is where the term "water closet" comes from.) Only one of them was open, and the toilet didn't look like an original fixture (although I am hardly an expert) so I'll spare you a photograph. Aren't you lucky? 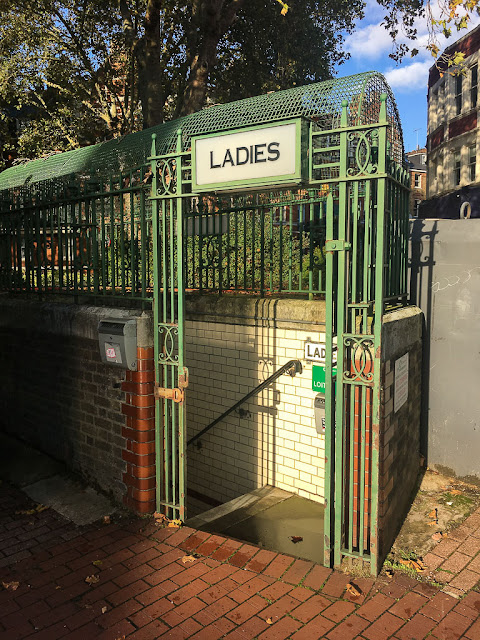 So yes, here I am, touring Victorian restrooms so you don't have to. Never say I don't go to great lengths to provide a fascinating blog post!
Incidentally, some of you commented yesterday about my use of the term "restroom." I must admit, if I opt for a euphemistic phrase for a place to relieve oneself, that's the word I go for. Maybe it's an American thing. I realize there's no resting involved, although as Ellen pointed out, some facilities (particularly fancy women's rooms) do have adjacent lounges with a couch or other furniture.
I also use the term "bathroom," although I suppose that's more accurate when it's also a room for bathing. Like some British people I casually say "loo," which I think is a great word. There's also "toilet," but to me a toilet is more the fixture itself than the room in which it resides. And there's always the very European "water closet" or "WC" (which I invariably pronounce "vay say," in the French style, a lasting after-effect of my time in Morocco). So much terminology!
Posted by Steve Reed at 6:26 AM

I believe that the Queen ( and the " upper crust" in general)use the word lavatory for what most of us call the loo or the toilet!

Oooh, Royal Dalton urinals! Thank you for being our eyes, noses and ears - it is much more interesting through your camera lens.

Just wondering if you had to put money in the door to use the toilets. I remember the old one's at Brighton Station had large heavy wooden doors and needed an old penny to get in. The locks were large brass one's and always highly polished.
Thanks for showing Steve.
Briony
x

"Oi! What you doin' taking photos in The Gents lav? Are you a perv or somethink? Can't a bloke have a piddle in peace?"
"I'm just taking pictures for my blog! I didn't mean any harm!"
BIFF!
AARGH!
CRUNCH!
OUCH!
Followed by the swift pattering of feet as our intrepid reporter escapes further retribution.

Well, this is exactly the kind of content that I come here for, which is a vicarious thrill of living in one of the world's great cities. And yes, "Vaspacienne" is what the French call those unsightly and weird metal pubic lavs. Which is odd, non? It's a feminine noun for a men-only facility. Just shows you how ridiculous it is to have gendered nouns, and yes, I'm being linguistically judgmental.

I wish I could thank you for showing us the harsh reality behind the lovely entrance gates.

Obviously these "conveniences", as stark and unappetizing as they are indoors, served their purpose(s). But, by golly, I hate public toilets; stations and stuff. If you are really caught on the hob either try and be near Harrods, Knightsbridge, London or any other classy department store. You will not be disappointed.

An even hotter tip of the day, and you may already do/know this, Steve, enter a hotel. The more upmarket the better. What you do NOT do is look around, in despair to locate the facilities. You look as cool as a cucumber. You exude the confidence of someone who either is a guest already (preferably a suite) and/or looking to meet a friend in the lobby. HA! The world is your RESTROOM and proper towels to dry your hands into the bargain. No shit.

That floor reminded me of the time that Lis and I were discussing colors for kitchen floor tiles. Red and black came up. Lily, who was quite young was horrified and burst out, "No! Red and black is like murder and death, murder and death!" We did not get red and black kitchen floor tiles.
When you've been a mommy/grandmommy as long as I have, the facilities are frequently referred to as "the potty." "Do you need to use the potty?" Or, quite frankly, I often just say, "Excuse me. I need to pee." And head off to the room reserved for that action. Sometimes I just call it "the ladies'". Thanks for taking the time to satisfy our curiosity with your camera.

Thank you for exploring and photographing the loo, restroom, toilet, bathroom, WC, etc.

I'm glad you went in there! It looked exactly like I thought it would :)

Well, I think you or somebody else has a good topic for a blog. How many terms are there for the little outhouse? This was interesting.

I always wondered where 'loo' came from as a reference to toilets. Frances points out that the 'upper crust' uses lavatory so perhaps it's slang for that. but yeah, thanks for satisfying our curiosity.

Thanks for going inside and photographing the "loo" for us. Those tiles on the wall reminded me of the time I was at someone's house during a remodel and they were having those same tiles put up as a backsplash in their kitchen. They called them "subway" tiles. And I see that Royal Doulton makes more than fancy china. What a fun post.

Whatever these amenities are called, I think it's very interesting that they are still usable and being kept up rather well. You have a wonderful day, hugs, Edna B.

I wonder who keeps them, er, clean. And do they have to pick up used syringes and the like. At any rate, Steve, thanks for taking us on a tour of the present/past. Now let's get back to flowers and Olga.

Thank you for going to the loo for us! Very nice, Next time maybe check out the "Ladies" , pretty sure not many actually use them, right...possibly because there are no "Ladies".

I had no idea it would happen so soon. Thank you for your explorations. Very cool. I'm disappointed (although not surprised) you don't have photos of the LADIES. I want a Royal Dalton urinal.

Restroom is what I would call it. But I'm also an American.

I love a good restroom! When we were in Pueblo, CO we wandered through the old train station there, which has been restored and is just beautiful. Since no one else was in there, we toured both the women's and men's restrooms. Gorgeous, just beautiful. The wood was amazing in both rooms.

Thanks for showing us some good architecture!
Doesn't loo come from l'eau?
You would love to see Hunterwasser's toilets in Kawakawa in NZ.

What you describe as a skylight are common enough here. Some have been filled in with concrete or similar but many still function as they should. I don't know about now but they used to be referred to here by the brand name, Luxifer.

Glad you didn't get arrested for, ahh, loitering?

Frances: Now see, I didn't even think of "lavatory." I guess I'm not posh enough. LOL

Susan: You are welcome! I must say, this place is old and worn but it was very clean.

Briony: I took a quick look at one of the locks and it didn't look like it took money. I hope someone saved those old locks for posterity's sake!

YP: Ha! I was very careful not to photograph anything when there were people about!

Vivian: OMG, I could not agree more about gendered nouns -- probably the most exhausting aspect of trying to learn French. (And very passé now that we're acknowledging that gender is not binary!)

Ursula: Yeah, it was interesting to take a look at them from a historical perspective, but I'd rather not use them. A hotel is a good tip!

Ms Moon: "Murder and death!" LOL! I love that. I was disappointed that these tiles weren't really "red" but more of a rust. From the historical listing's description, I was picturing bright red.

Robin: You are welcome!

Bug: Yeah, I guess there's not a whole lot of variation in what a public toilet looks like. :)

Red: I'm sure we could come up with more!

Ellen: I think Gwynneth has the answer below -- it's from the French "l'eau." That makes sense to me.

Edna: Kept up well considering they're more than 120 years old!

Catalyst: They were quite clean, actually. There's an attendant's office off the men's room and I could hear a radio coming from within, but I didn't actually see an attendant.

Linda Sue: Ha! I don't dare go into the ladies! I was a little nervous even photographing the entrance.

Mitchell: At least for the ladies we have the description of the historical listing -- sounds very similar. (Except the obvious lack of urinals.) Yeah, I didn't waste time, did I? LOL

Colette: I think that's the most common term in the states, for sure.

Allison: I'll have to look to see if there are pictures online!

GZ: YES! So glad you answered the "loo" question! I'm sure you're right.

Andrew: I thought they were glass blocks at first, but now I'm not so sure. I wonder why they covered it over? Seems like it would be an asset to have a skylight in there. The one in the picture is over the sinks, but there's another one above the urinals.

David: LOL! I did not hang around -- I bet I was in there for three minutes, max.

LOL! I was so curious to see what they looked like inside, but was afraid to sound like a weirdo. Thanks for this post. I thank you for the look. Doulton. I wonder if this is the royal Fulton that hyacinth keeps going on about?

*doulton. Autocorrect will be the death of me.