More on 'My Fair Lady' 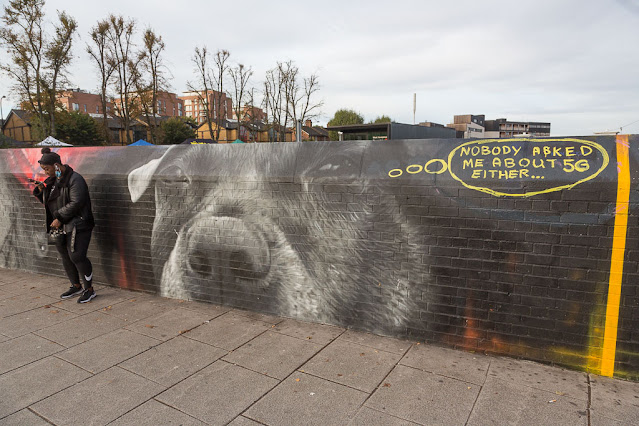 Our local graffiti commentator has once again attacked the mural of Sugar the dog on the railroad bridge near the West Hampstead Thameslink station. Not long after their previous vandalism was repaired, this thought bubble appeared. Someone thinks they're cleverer than they actually are.

After yesterday's post, in which I criticized the sexism of "My Fair Lady," I got to wondering whether I had completely missed the point of the movie. Obviously Henry Higgins is supposed to be a sexist buffoon, and his depiction is supposed to emphasize the ridiculousness of his sexist condescension. Apparently "Pygmalion," the George Bernard Shaw play upon which "My Fair Lady" is based, is actually very pro-women. For me, the problem with "My Fair Lady" was that Eliza, although resentful of Higgins' domination, returns to him in the end -- spurning both another young man who loves her and her own independence. It's assumed that she winds up with the much older Higgins romantically, something that apparently doesn't happen in "Pygmalion," although even in "My Fair Lady" they're never shown embracing or kissing so it's a bit ambiguous.

I did some reading, and it turns out there are several opinions. One says that "My Fair Lady" is a somewhat progressive movie with an admittedly problematic ending; another says it's misogynist even as it ham-handedly attempts to rebut misogyny; another speculates that Higgins -- a bachelor whose closest friend is another like-minded man, is gay. It's all pretty fascinating. A lot of people have given this a lot of thought!

I'm sticking with my sexist verdict.

Yesterday was pretty low-key. I cleaned the house thoroughly, wiping down the mantelpieces and the windowsills, cleaning the bathrooms and under the microwave, and vacuuming Dave's chair, which had accumulated an impressive quantity of snack food detritus in its crevices. Last week I took our blankets and bedding to the cleaners. So we're spic-and-span around here.

Olga went out with her dog-walker, Kim, and even though it was raining she came back suspiciously dry. I'm choosing to believe Kim (who is a man) dried her thoroughly before letting her back in the house, but Dave joked that she'd merely spent the time riding around in Kim's van.

Dave was planning to make a pie, so I pitched for pumpkin -- I thought he might even like to try it from scratch. He eagerly embraced the idea, but only if he could use pre-made pumpkin puree, and that's fine too. He wound up having to wait, though, because he forgot to buy sweetened condensed milk. So that will hopefully be coming later in the week.

Meanwhile, we're back to work today. Dave is ending his period of self-isolation and remote teaching (following a positive Covid-19 test from the sister of one of his students a few weeks ago) and returning to the classroom. Ah, routine!

It's so sad when morons spoil attractive street art. The thoughts contained in those bubbles clearly come from someone who is attracted by the QAnon movement with its crazy conspiracy theories. I hope that you and Dave are having a thrilling day at "work" if indeed the provision of education counts as work.

While the fifties interpretation of My Fair Lady was popular and amusing at the time, my real interest lies with the GBS play. As a result I read the last comment yesterday from Kirk, skipped over to his blog, found info there about the GBS play plus a whole lot more connected to the topic..
Alphie

Steve, with all that cleaning, spick and span, you qualify as an honorary German housewife. It's one thing to expect your freshly baked mother-in-law (my first was German, and I was only nineteen) to come round for inspection. It's another to prepare for a, by definition fastidious, gay guy, in expectation of a perfect Martini, to cast his eye over one's failings. Is it a stereotype?

Stereotypes, and how to blow them apart: Once upon a time (we were in our twenties) my next door neighbour and friend was, physically, your cliche depiction of a young gay guy. Not only was he a hairdresser (!), he was beautiful. Enter his boyfriend. Luckily I wasn't sitting on a chair otherwise I'd have fallen off on introduction. He was a leather clad chunk of a guy, butch as they come, quite a bit older, policeman, on a heavy bike. It was the closest I have ever come to rescuing a princess from a dragon. Alas, my sword was blunt.

What does the above have to do with your post? My brain works by association.

Some years ago a friend of mine decided to make a pumpkin pie from scratch. He got a pumpkin and followed the directions. He ended up with what he referred to as sludge and figured it couldn't be right. So he went out and got a can of puree and it looked just like what he had made so he went ahead with his original plan. It was very good.
Here in New England people make rose hip jelly. I have never made it but did collect a lot of hips for a friend who did. It is good, if somewhat bland.
Cheers

Have Dave make you a sweet potato pie. I think they are superior to pumpkin. Glad to hear he's ready to go back into the work place.
I guess...
I have read Pygmalion and I seem to have some memory of actually seeing the play but I'm not sure. It was a long, long time ago if so and I was too young to grasp the underlying themes. I suppose that since GBS is long dead, we are free to muse and conjecture all we want about what he may or may not have been saying.
Good for you for cleaning! Can you please send me about a quarter of a cup of motivation?
Thank you.

I'm with you with on the sexist verdict. I love the music in My Fair Lady and the beautiful costumes but the ending has always bothered me.

Yes, I think My Fair Lady is sexist. Good music though.
I have made pumpkin pie from scratch. I don't think I've ever used canned pureed pumpkin. I haven't made it in years though and would probably go with something easier than starting with a hard-skinned, hard to cut pumpkin.

Pygmalion was I think a much more thoughtful, thought-provoking story than the devolved version in My Fair Lady, especially the what appears to be suggested by the ending of the musical (Eliza was going to be fetching his slippers forever). Still, I love the songs.

That graffiti commentator would really annoy me.

When you're sending the quarter cup of motivation to Ms. Moon could you go ahead & send me about 2 cups? All of that deep cleaning stuff never happens around here because I'm lucky to get the basics done. For example, it's been six weeks since I dusted. SIX! What the heck.

I love the music from My Fair Lady (especially Get me to the Church), but there are a lot of themes that I found disturbing when I watched it as an adult.

It's a shame folks can't leave beautiful artwork alone. I could use some of your energy. You have a nice day, hugs, Edna B.

cleaning rarely gets done around here. the bathroom and the kitchen get done, the rest falls by the wayside until it surpasses my extremely high tolerance for dust and leaves on the floor.

I was young enough when I watched the movie that all I really remember is a lot of singing, and a mean older guy making a pretty younger woman change the way she spoke. So there is my highly informed analysis of the movie!
Good on you for the cleaning, we get so much dust in the house (living in desert) that there just doesn't seem to be much point in removing it. It'll be back.

Perhaps you can overthink old movies and plays, along with books and just keep in mind they were produced at a certain time, very different to the time we live in now.

YP: Yes, it is very Q-Anon. I too am disappointed this idiot decided to deface our mural AGAIN.

Ursula: Well, I suppose I do have distantly German roots, through the Saxon settlers in England. Some twinky guys like the "daddy" type!

Peter: Yeah, pumpkin puree never looks very appealing by itself. I've never had rose hip jelly but it strikes me as something you might make if you don't have ready access to any other fruit!

Ms Moon: We usually have sweet potatoes as a sticky sweet side dish at Thanksgiving, so we make a pumpkin pie -- but yeah, I love sweet potato pie too!

Robin: It's hard to fault using canned pumpkin -- it does make things SO much easier.

Mitchell: I guess that's partly why Shaw is considered such an institution. Yeah, the graffiti is a drag.

Edna: It IS a shame!

Allison: That's really all you need to know! I never thought about the dust situation there -- I can see how that WOULD be a challenge.

Andrew: True! Is that a hint I should stop writing about this? LOL