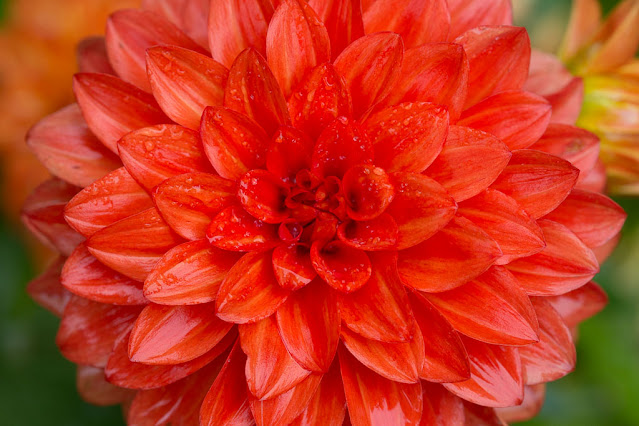 It rained pretty much all day yesterday. I ducked out into the garden with my camera to get a picture to blog -- this is one of our dahlias, still blooming when many of the others have pretty much stopped. Other than that, I didn't leave the house.

I had plenty to do, though -- laundry, vacuuming, cleaning the bathroom and kitchen. I threw away our shower curtain, which was in a truly deplorable state, just as our replacement arrived from Amazon. Perfect timing!

On the news, Boris is now advising us to live "fearlessly but with common sense" with regard to the coronavirus. How that translates into practical guidelines is apparently up to us. The consensus is that this government is remarkably ambiguous. 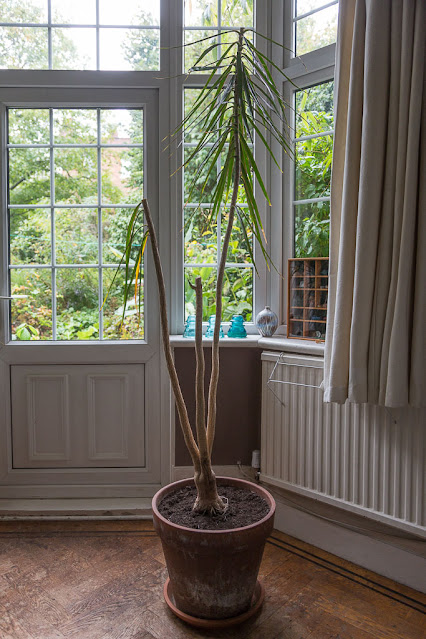 I also trimmed our gigantic dracaena, which was literally scraping the ceiling. (It looked like this a year ago, and it was even taller when I finally took the secateurs to it.) New sprouts will emerge at the top of those stalks -- there's already one on the middle stalk, which we cut a few months ago. I saved the cut pieces to root and turn into new plants, which maybe I'll take to work.

That stalk on the right is still a little tall, but I wanted to leave some leaves on the poor plant.
I spent the morning reading in bed, with Olga by my side: 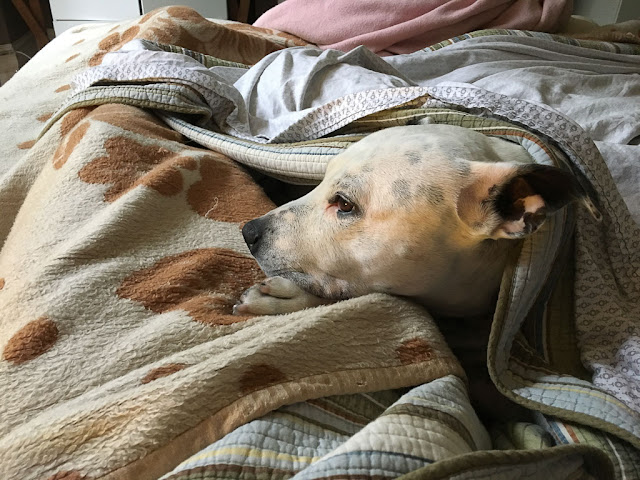 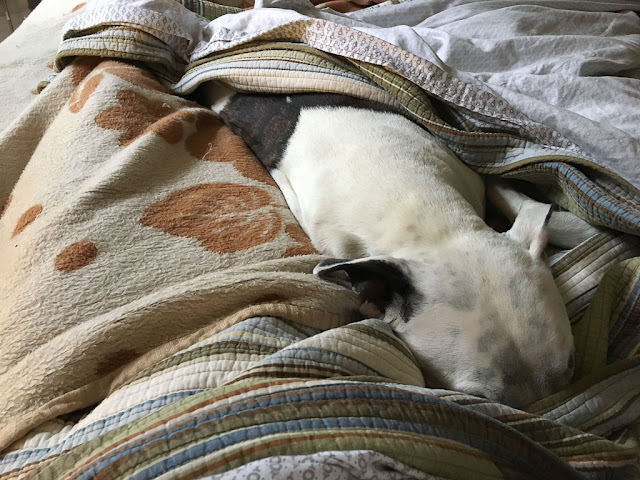 I so love dahlias and haven't seen any this late summer/fall. And that bed looks so cozy!

"Fearlessly but with common sense" - more mumbo-jumbo from English Trump. I have no idea what it means. If "common sense" is admirable why are people having to vacate pubs and restaurants at 10pm prompt? That should simply mark the end of serving time before a leisurely departure.

We just cut back our dracaena, too. No new growth yet. The official "instructions" provided by Johnson and the British government regarding Coronavirus have been unclear and useless. He and Trump were cut from the same cloth. I wonder if it's the hair. You know, like Samson losing his strength. Maybe Delilah should give them both major haircuts and see if they lose their stupid.

Slight snarl, Steve, your lovely Dahlia and Olga notwithstanding.

Why do people call Johnson Boris? Even Trump is called by his surname. Churchill is Churchill, not Winston. Hitler was Hitler, rarely Adolf. Chamberlain - I don't even know his first name. Kennedy was Kennedy. Both Clintons were just that. And Obama was Obama. Even Thatcher was Thatcher (unless, admittedly, she was Maggie). And Merkel is Merkel. Yet, some (not me) are giving Johnson the (cuddly) Russian bear's affectionate "Boris". What's next? Sascha? Another variant of Alexander. And then there is Putin. Call me Vlad.

Good dog. Better than an electric blankie for keeping warm on a rainy Fall day.

Steve I just stopped by to let you know that orange thing most likely doesn't have the coronavirus. He is a very sick person in the head. He had a motorcade driving by the idiots(his supporters) outside walter reed hospital, waving and looking stupid. No one could believe this. Now all of those people are going to have to go into quarantine. (The ones in this parade.) Chris Christie is suppose to have tested positive for the virus. He's a big liar too. He lied and said Joe Biden drifted off into space during the debate. I watched it all the way and the only thing happen is: Trump was keeping up so much mess and disturbance and Joe had drifted off telling him to shut up and the only thing he needed was the question to be repeated because there was no way he could keep the question they asked him in his mind with all this distraction from Trump. If Buffalo butt Chris Christie doesn't have it, he need it to. He lost his position as New Jersey Governor for causing the road block on the bridge that lead from New York to New Jersey and denied it but they knew he did it. He is still out there trying to be a VIP and is nothing.

I think that BJ is trying to sound like Winston Churchill. And he doesn't.
I've never grown a dracaena. It will be interesting to see what yours looks like when it's all sprouted again.
Jack is my Olga, I guess. Every time I get near the bed he runs to see if it's time for a nap for us. What would we do without our snuggie animals?

Your dahlia is beautiful. Olga looks so comfy all cuddled down into the blankets. When you get tired of that rain, send it our way. We could use a bit of it. Enjoy your day, hugs, Edna B.

I love that flower photo and how cute Olga looks all snuggled up. Oh if only we would have a rainy day for a change of pace.

Beautiful dahlia. I keep forgetting to photograph the last of the dahlias and roses blooming here. Maybe I'll remember soon and actually do it.
Olga is so cute all snuggled up in bed.

I should have done some work out in the yard yesterday but didn't. dahlia bulbs don't survive our summers here or maybe it's that it doesn't get cold enough like tulips. they have to be planted every year or else dug up and refrigerated after they bloom.

even with Trump and Melania's infection they still aren't making masks mandatory at the White House.

You had a sheltering sundy but everything is good.

You have made it a perfect Sunday. Following your lead- on Monday. Bathroom clean- check. Plants cared for- check. Go out and get a dog...not yet.
The treatment that the Rump is receiving has proven to be successful in the UK. Hopes dashed for the Rump to linger in illness for a while.

Olga is the living embodiment of comfortable in the blankets. We should all be so lucky as to reincarnate as a beloved pet. I don't really understand Boris' directives on how to do the covid response. You need better guidelines! We have really good guidelines, but 48% of the population will not comply.

Ah, a rainy day and reading in bed with a faithful friend to keep one warm. Sounds kind of like heaven, Steve.

One of the best times of the day is when Murphy snuggles with me in bed. He sits by my side all day while I am teaching virtually. What does "fearlessly with common sense" actually mean? Sounds like stuff Trump would mutter.

Elizabeth: Lying in bed reading is a rare privilege for me, so the dog took full advantage!

YP: I could not agree more. It sounds good but it means nothing.

Mitchell: Ha! I wonder if Boris dyes his hair? We know Trump does. Maybe this is all associated with the toxic effects of men's hair products.

Ursula: I think it's just that "Boris" sounds much more distinctive than "Johnson," which could be almost anybody. There are sp many Johnsons. And I disagree about your premise -- Eisenhower was "Ike," and Hillary Clinton was very much "Hillary." Her campaign logo was a modified letter H. Jeb Bush famously ran for governor in Florida as "Jeb!" (Exclamation point included)

Angelicastar: It looks like he does in fact have it, but he's certainly acting like he doesn't. (And thereby infecting everyone else.)

Ms Moon: I think Maurice wishes she could be more snuggly!

Edna: Thanks -- I really like those red dahlias. They were a good investment!

Sharon: Olga is a very good snuggler, for sure.

Ellen: We have the opposite problem -- we have to dig the tubers up and keep them dormant in a cool, dry shed so they don't freeze over winter!

Red: Everything here in the household is good. I don't know about the rest of the world!

Linda Sue: I think another dog would be a great idea for you.

Allison: I think they're trying to be deliberately vague so people don't feel like they're being ordered around, but as a result, none of us know exactly what's expected.

Catalyst: It IS heavenly! I'm already looking forward to next weekend!

Michael: That's one thing good about teaching from home -- the canine company! Olga lies on her bed beside Dave, too.